There are at least 110 places in New England that have the word “Devil” in their name, and forty-three of them are in Massachusetts. Hmmm. What does that say about the Bay State? There's Devil’s Hollow in Marshfield, the Devil’s Landslide in Wellesley, Devil’s Garden in Amherst, etc. And in Newbury, there is... the Devil's Den. 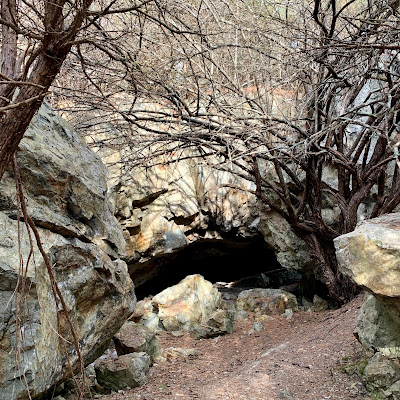 Last weekend Tony and I took a trip up to Newbury to visit the Devil's Den. The Den is actually a small cave located in an old, abandoned limestone quarry. There are a lot of old quarries in New England, but this one is really old. It was first quarried in 1697 and finally shut down in 1830. The quarry is not large but is very dramatic looking, which is why is probably why it got its devilish reputation.

Long after these quarries had ceased to have a commercial value, pleasure parties were accustomed, during the summer months, to seek rest and recreation there, beguiling the time with marvelous stories in which the Prince of Darkness was given a conspicuous place. In later years, the young and credulous found traces of his Satanic Majesty's footsteps in the solid rock, and discovered other unmistakable signs of his presence in that locality; and ever since the Devil's Den, the Devil's Basin, and the Devil's Pulpit have been objects of peculiar interest to every native of old Newbury. (Ould Newbury. Historical and Biographical Sketches, John James Currier, 1896)

That passage mentions several devilish places. The Devil's Basin was another nearby limestone quarry, filled with water, which I believe was about a half mile away from the Devil's Den (according to Volume 3 of Contributions to the Geology of Eastern Massachusetts, 1880). I'm not sure if the Basin still exists, but according to this site it was located south of the Devil's Den. That area now seems to be mostly landfill which is why I think the Devil's Basin is gone. The Devil's Pulpit was a large boulder nearby but we couldn't locate that either.

The Devi's Den still exists, and in the early 19th century young boys who lived nearby would perform a strange initiation ritual at it. They believed that a certain magic word had been written on the floor of the cave which would kill anyone who entered it. Certain precautions had to be taken before entering the cave to nullify this curse.

I suppose that no boy ever went to that place alone, and a sort of solemn ceremony attended his first visit with his older playmates, to a scene bearing an appellation ominous enough to call up every vague dread of his youthful heart. The approach on these occasions was rather circuitous, through the pastures, until an elevated mass of stone, standing quite solitary, was reached, designated as “Pulpit Rock.” To the summit of this, the neophyte was required to climb, and there to repeat some accustomed formula, I fear not very reverent, by way of initiation, and supposed to be of power to avert any malign influences to which the unprepared intruder upon the premises of the nominal lord of the domain might otherwise be subjected. (George Lunt, Old New England Traits, 1873)

Other than this curse and ritual, the Devil's Den had one other interesting feature. The Devil’s Den was made of limestone, but also had deposits of a mineral called chrysotile, a naturally occurring form of asbestos. Chrysotile is soft and chewy, and in the 19th century boys going into the cave would supposedly chew it. Hopefully, they avoided any dangerous side effects. Ingesting asbestos is probably scarier than than a Devil's curse! 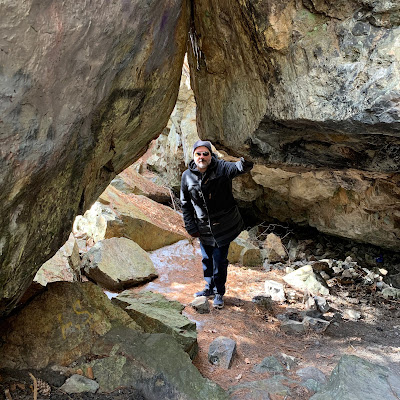 I first learned about the Devil's Den while writing my first book, Legends and Lore of the North Shore. Back then, the Devil's Den was on private property, but it is now part of the 28-acre Jennie Lagoulis Reservation. It's worth a visit if you're in the area. Despite it's scary name and legend, you shouldn't be too spooked if you visit. The reservation is the site of a children's nature camp. If little kids can brave the terrors of the Devil's Den you can too. 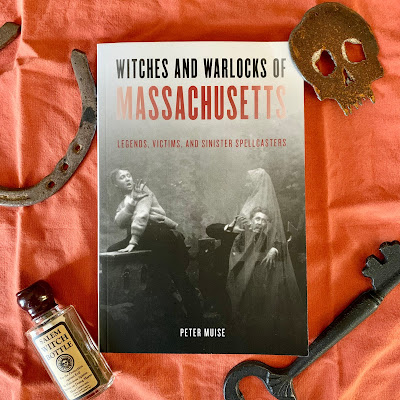 The other day I made some brown bread. Many of you might be familiar with this delicious loaf, but if you're not here's the scoop. It's a bread made with rye flour, wheat flour, and cornmeal that is usually sweetened with molasses. You usually find it at clambakes these days, but in the past it was just an everyday bread.

Some people make brown bread by steaming it in cans, but although that results in a very moist loaf it is not really necessary. You can bake it in a regular pan. I was feeling a little bit Goth, so I baked mine in a skull-shaped Halloween pan I have.

Brown bread has its roots deep in New England's culinary history. It's had different names in the past, like "rye and Indian," which refers to the rye flour and the cornmeal, which was once called Indian meal since it originated with the local indigenous people. Sometimes brown bread was also called "thirds" because the recipe called for one third each of wheat, rye, and cornmeal. Wheat does not grow well in New England and was very expensive here in the 17th and 18th centuries, so the English colonists made their bread by mixing this precious commodity with the other two grains, both of which grow better in this climate.

As I made my brown bread, interesting stories about rye and cornmeal came to mind, one about the Salem witch trials and one from local Algonquin lore.

Here is the Salem story. Most historians think the Salem witch hunt was caused by social and psychological factors. But what if there was a simple biological cause? In 1976 Linnda Caporael, a biology grad student at the University of California Santa Barbara, suggested that ergot, a fungus found on grain, might be responsible for the witch trials.

The English colonists grew a lot of rye, and during warm wet weather, ergot grows on rye. Ergot contains a compound similar to the hallucinogen LSD. People who consume rye ergot-infected with ergot can suffer from hallucinations, auditory disturbances, convulsions, strange skin sensations, vomiting, and psychosis. These symptoms sound like the symptoms suffered by the allegedly bewitched Salem girls. Carporeal argued that the spectral visions and strange fits these girls experienced were caused by the fungus.

This theory received a lot of publicity when it was published, even meriting a front-page article in The New York Times. A critique was published a few years later by Nicholas Spanos and Jack Gottlieb, two psychologists from Carleton University. They argued there was not strong evidence connecting ergotism to the Salem witch trials.

Convulsive ergotism, they claim, is only found in people with a Vitamin A deficiency. Someone with sufficient Vitamin A in their body suffers instead from gangrenous ergotism, a different variety of the disease which causes gangrene and rotting flesh. (Yikes.) The farmers in Salem Village consumed lots of dairy products, and the residents of Salem Town ate plenty of fish, both foods rich in Vitamin A. If ergot was present they should have suffered from gangrene, which they didn’t. 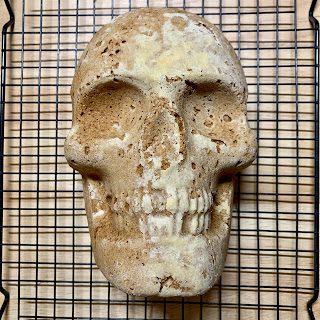 Spanos and Gottlieb also point out that some symptoms of convulsive ergotism weren’t present in Salem, like vomiting and diarrhea. Most importantly, though, the afflicted girls only experienced their torments at specific times, usually in the courtroom when accused witches were brought in. Outside of the courtroom they were usually symptom-free. This strongly suggests their symptoms were not caused by ergotism. Many people who testified during the trials also said they only testified because they feared imprisonment or execution. It would be nice if the witch trials had been caused by something as simple as a fungus, but regrettably it seems that human ignorance and malevolence were more likely to blame.

That's kind of a weird and unpleasant thing to consider while making bread, but the other story is happier. It's connected to cornmeal. Corn was one of the staple foods for the local Algonquin tribes, and many tribes told stories about how it was brought to Earth from heaven by a crow.

Here's one version of that story from Kitt Little Turtle (1940 - 2004), a Nipmuck medicine man from Webster, Massachusetts. It appears in the book Dawnland Voices: An Anthology of Indigenous Writing From New England (2014), edited by Siobhan Senier.

Many generations in the past, the Nipmuck lived only by hunting and gathering. They depended entirely on wild game and other food they could forage. Because of this they were always on the move and never settled in one place.

One year food was very scarce and the Nipmuck were close to starvation. During this time a crow appeared in a vision to a young man. The crow told the man about a wonderful plant that would prevent the Nipmuck from starving.

The man wanted to go find this plant, but the crow told him it was too far for him to ever find. The crow would bring it to him. The crow also told him that the crows would follow the Nipmuck forever if they grew this special plant. It was, after all, the crows' favorite food.

A few days later the man was wandering through the woods when a crow appeared. It was the same one he saw in his vision. The crow gave the man three seeds: corn, squash, and beans. These are the Three Sisters which grow well together in the same field. The crow told the man how to cultivate and harvest these crops.

Ever since that time, the crows visit whenever the corn is harvested to get the share that is due them.

There you have it. Two stories, one delicious loaf of bread!