The Talkative Ghost of Nelly Butler

The following are some things I consider traditional activities for ghosts: moaning eerily, knocking things off shelves while invisible, showing up in people's bedrooms and scaring the heck out of them, and maybe even making the walls bleed. I'd even accept flushing toilets incessantly in a haunted hotel.

I wouldn't consider talking for hours and hours a very ghostly activity. But New England's first recorded ghost did just that. In fact, she delivered entire sermons to a large audience.

The haunted happenings started in 1799 in the Machiasport*, Maine home of Captain Abner Blaisdel. Throughout the year the Blaisdel family heard odd sounds in their home, but although they thought it unusual they didn't worry much about it. In early 1800 the noises became louder and more easily identifiable.

It was a woman's voice, and it was coming from their cellar.

The voice claimed it belonged to one Nelly Butler, the recently deceased wife of nearby resident Captain George Butler. Nelly's ghost chatted with the Blaisdel family for a while, and eventually they summoned Nelly's father, David Hooper. Mr. Hooper came to the Blaisdel's cellar a skeptic, but left convinced that it was indeed his daughter's spirit talking to him.

In the spring of that year Nelly became visible, appearing first to one of the Blaisdel children as a glowing female form floating over the fields. Soon she began appearing as a glowing white shape in the Blaisdel's cellar, where she would lecture large crowds of people about the Bible and their moral (and immoral) behavior. Eventually, Nelly began appearing in the woods and farms around town, and in the Hooper and Butler family homes.

Nelly also delivered prophecies, accurately predicting that Capt. Blaisdel's wife and father would die, and that her own widowed husband Captain Butler would marry Blaisdel's daughter Lydia. Nelly appeared at their wedding, and sadly predicted that Lydia would be dead within ten months. That prophecy also came true. (It also silenced local gossips who thought Nelly's ghost was really a hoax created by Lydia Blaisdel - Nelly continued to appear after Lydia died.)

Reverend Abraham Cummings, a local clergyman remained skeptical. He thought Nelly's ghost was clearly a hoax perpetuated by Captain Blaisdel himself. But he changed his mind after encountering Nelly, who appeared to him along the road as a ball of white light that changed to a woman "with rays of light shining from her head all about, and reaching to the ground." Rev. Cummings later wrote about his meeting with the ghost in a pamphlet called Immortality Proved by the Testimony of Science.

And that was the last time Nelly appeared to anyone. Apparently her mission was done.

This is one of those "what the heck!?!?!" stories that are hard to categorize. I got a lot of my information from Joseph Citro's excellent book Passing Strange, and he points out the similarities between Nelly's ghost and spiritualism and visions of the Virgin Mary. I think those are both good points. Spiritualism didn't officially appear until the 1840s, but perhaps this was an early precursor. The Machiasport folks were Protestants, so maybe they categorized a phenomena differently than Catholics would have, who might have seen the spirit as Mary.

As for myself, I'm just confused and puzzled.

For those who want to read more about Nelly Butler's ghost, Google books has the text of Emma Hardinge Britten's 1884 book Nineteenth Century Miracles, or Spirits and Their Work in Every Country of the Earth. It contains transcripts of conversations with Nelly and more details about her appearances.

Thomas Jefferson and the Giant Cheese

Here's a great little story about a big cheese, just in time for Presidents Day.

When Thomas Jefferson was elected the third president of the U.S. in 1801, many people in New England were unhappy. To be specific, many Congregational ministers were unhappy. Jefferson was a big fan of separating church and state, and the Congregational ministers looked back fondly to the days when New England was a Puritan theocracy. Although the Congregational church was still the official state church of Massachusetts, with someone like Jefferson in office it seemed like even this privilege would soon be gone. Supposedly, when news of his election reached Massachusetts housewives hid their Bibles because they were afraid Jefferson would confiscate them.

However John Leland, the Baptist minister of the tiny town of Cheshire, Massachusetts, was overjoyed that Jefferon was the new president. As the practitioner of a minority faith in New England, Leland wanted to express his excitement in a big, big way.

At a Sunday service after the election, Leland presented his plan to the congregation. If each family contributed some milk, they could produce the world's largest wheel of cheese as a gift for President Jefferson!

Thomas Jefferson: patriot, president, cheese lover!
The congregation embraced his idea, and contributed milk from 900 cows to produce a mammoth wheel of cheese that weighed over 1,200 lbs. Over the course of three weeks the cheese was slowly transported down the coast to the capital, accompanied by Pastor Leland, who preached to curious crowds along the way. By time it reached Baltimore, one local commentator claimed the ripening cheese was now strong enough to walk the rest of the way on its own.

The minister and his cheese reached Washington in December, where both were enthusiastically greeted by Jefferson. The cheese was eaten over the course of two years. Sadly, its spotlight was finally stolen by a giant loaf of bread baked by the U.S. Naval Academy. (No, really, that's true.)

In some ways this is just a quirky little story, but beyond the giant cheese there are some interesting facts:

I wish I could sum this all up with a pithy remark, but I can't. Perhaps for this Presidents Day we should all just eat some local cheese and think about our country's weird political history. And ponder if cows can really have a political affiliation.

I got most of my information from the Acton Institute, with a little help from Wikipedia. You can see the monument Cheshire erected to honor their giant cheese here.
3 comments: 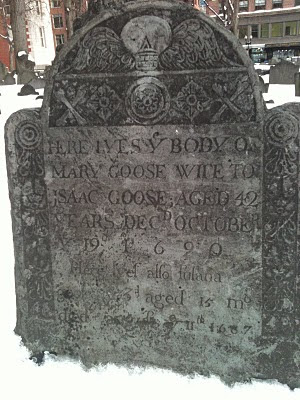 If Mother Goose wasn't a Bostonian, who was she? There seem to be a few theories floating around out there. For example, maybe she was really one of two French queens. Both were named Bertha, and one was known as Bertha Goosefoot. Or, if you want something more pagan, Mother Goose may be a memory of various ancient European goddesses associated with geese, including one called Bertha who was portrayed with a goose foot. They're both interesting explanations, but there's no hard proof for either one. Personally I prefer the more pagan theory, but I think this is just one of those cultural mysteries we won't be able to ever resolve.
1 comment:

The list of famous people who stayed at the Parker House is astounding. Charles Dickens gave his first public reading of A Christmas Carol while a guest there. While staying at the Parker House, actor John Wilkes booth practiced his pistol-shooting at a nearby firing range. Years later, a widowed Mary Todd Lincoln was a guest as well.

However, the identity of its long-time ghostly guests is less certain.

A man dressed in Victorian clothing has been seen on the ninth and tenth floors. He appears solid for only a moment before fading away. Hotel lore says it is the ghost of found Harry Parker. Since this ghost once appeared at the foot of a guest's bed and asked if she liked her room, that seems like a good guess. Perceptive visitors to the ninth and tenth floors have also reported seeing orbs of white light floating in the hallway.

Apparently the third floor also has its share of supernatural activity. For many years the elevator would invariably stop on this floor, even when no one was visible. The famous actress Charlotte Cushman often stayed on the third floor, and died there in 1876. Hotel lore naturally blames the faulty elevator on her post-mortem dramatics, but I think the jury's out on which ghost is to blame.

On the same floor, guest room 303 was allegedly where a traveling liquor salesman killed himself. Guests and staff alike complained about the strange laughter heard in the room, and scent of whiskey that never left. To add to the general creepiness, strange shadows were seen on the walls and the water in the bathroom would turn itself on and off. Rather than rent out the room to thrill-seekers, the hotel management took a different approach and turned the room into a storage closet. This stopped the supernatural activity. Not even a suicidal liquor salesman wants to spend eternity haunting a closet!

The information about famous guests is from Susan Wilson's The Omni Parker House. A Brief History of America's Longest Continuously Operating Hotel. I found the ghost stories in Cheri Revai's Haunted Massachusetts.
21 comments: