I've had a gross stomach bug the last few days, so I haven't updated this as much as I should. Luckily, I had this post pre-written from a while ago. The weather is still wintry outside, so this little piece of New England Gothic works well today.

Foxes, sly and crafty, are notoriously difficult to catch. The Narragansett Indians, however, knew about mysterious black foxes that were impossible to catch or kill.

In 1643 Roger Williams, the founder of Rhode Island, wrote:

"The Indians say they have black foxes, which they have often seene, but never could take any of them. They say they are Manittooes, that is Gods, Spirits, or Divine powers, as they say of everything which they cannot comprehend."

As the years passed, the black fox took on more sinister connotations among the British settlers, and a particularly nasty black fox was said to haunt the Salmon River in Connecticut. Poet John Brainard made this legend into a verse that was well-known in its day. Later, John Greenleaf Whitter, a poet from from Haverhill, Massachusetts, expanded the legend in his own poem in 1831, incorporating elements of the Wild Hunt myth and Algonquin shamanism.

"They said it was a Fox accurst
By Hobomocko's* will
That it was once a mighty chief
Whom battle might not kill
But who, for some unspoken crime
Was doomed to wander still."

*Hobomocko is one name for the Algonquin god associated with death, night, water and shamanism.

One winter, the black fox appears near a New England town, and two cocky young Yankee hunters chase after it with rifles, vowing that they will kill it. The local Indians disagree.

"They told us that our hunters
Would never more return
That they would hunt for evermore
Through tangled swamp and fern
And that their last and dismal fate
No mortal ear might learn."

Hmmm. Obviously, these hunters had never seen a horor movie or read a horror story. When the old guy at the gas station tells you to avoid Camp Crystal Lake, avoid it! When the local Indians tell you something's cursed, it really is!

In the spring, the hunters' corpses are discovered deep in the forest. Nothing ever grows on that spot again, and animals and birds avoid it.

"For people say that every year
When winter snows are spread
All over the face of the frozen earth
And the forest leaves are shed
The Spectre-Fox comes forth and howls
Above the hunters' bed."

It's a nice little story, and it's interesting to see how over two hundred years the black fox changed from something spiritual to something spooky.
6 comments: 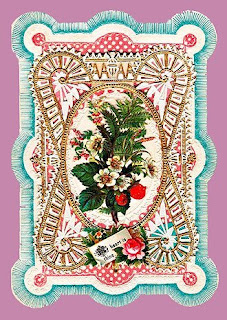 The first Valentine cards in the United States were produced right here in Massachusetts by Esther Howland, an enterprising Worcester resident who made her first cards in 1847. She soon couldn't keep up with the demand, hired people to make cards for her, and eventually sold the company and retired on the profits.

People who don't like Valentine's Day disparage it as a "Hallmark Holiday" - a commercial holiday created just so corporations can make some profits. But Hallmark didn't invent the holiday, and neither did Esther Howland. It actually has a long and somewhat murky history. According to Wikipedia (which also can be murky), the first written evidence connecting Valentine's Day and romance comes from "Parlement of Foules," a poem written by Geoffrey Chaucer around 1382. As far as I know, Chaucer didn't work for Hallmark.

No one is really sure why we celebrate love on Valentine's Day. The day is named after one of the several different Saint Valentines, but none of them are famous for being lovers or romantic. One of the Valentine's was supposedly martyred on February 14 by the Romans as part of the Lupercalia festivities. 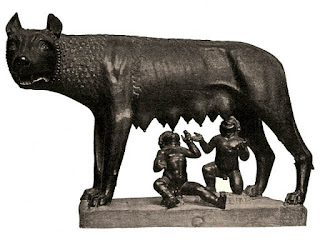 Romulus, Remus and their nurse.
On every February 14 the Romans celebrated Lupercalia, a holiday devoted to Lupercus, a god with a wolfish name who protected the flocks. Men of noble birth would sacrifice a dog and/or a goat in the cave where Romulus and Remus supposedly were suckled by a wolf. After the sacrifice, the men (either nude or scantily clad) would run through the streets striking women with strips of bloody animal skin to purify them and encourage fertility. February is named after the bloody strips, or februa, which means instrument of purification. There's no proof that Valentine's Day is related to Lupercalia, but it's interesting that a day celebrating sex and fertility was replaced by a holiday celebrating love and romance.

The Romans faced the same questions with Lupercalia that we face with Valentine's Day - where did this holiday come from, and why do we celebrate it? Just as we look to the Romans for clues, they looked to the Greeks and their even more ancient holiday Lykaia. According to Walter Burkert's book Homo Necans, Lykaia was celebrated in Arcadia (considered the most ancient and primitive part of Greece) with athletic competitions and animal sacrifices.

It was rumored, however, that at the heart of Lykaia was a human sacrifice. One unlucky man was killed, and a small piece of his body was put into a stew. All the Arcadians sat around a big pot to eat. Whichever Arcadian got that little sliver of human flesh in his stew was transformed into a wolf, and could only regain human form if he avoided eating human flesh for seven years. 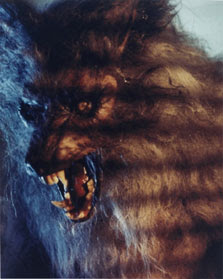 That Arcadian stew does it every time!

The Arcadians, like ourselves and the Romans, also wondered why they celebrated such a strange holiday. They attempted to explain it with a myth that an ancient Arcadian king, Lykaion, was transformed into a wolf by Zeus after he offered a human sacrifice to the god. But does this really explain anything, or only describe the ritual in a mythic way? Walter Burkert thinks the Lykaia dramatizes some type of ancient primal guilt around killing animals for food. It sounds good to me, but we'll never know for sure.

It's been a long trip from Arcadian werewolves to Esther Howland (a Holyoke grad and presumably not a werewolf) making her cards and a small fortune here in New England. I'm just glad I can eat chocolate today and don't have to worry about finding myself in a big stew pot.

A Full Moon, But No Snow; Worms on the Way?

This morning I woke up to see a beautiful full orange moon setting behind the trees. The full moon in February is called the Full Snow Moon, since this is traditionally the snowiest month of the year. So far, February has been relatively snow free compared to January!

The moon last month was the Full Wolf Moon, but I definitely saw fewer wolves last month than snowflakes this month. I suppose that's a good thing, but I'd be kind of excited to see a wolf in Boston. (If I was safely inside, that is.) The January moon has that name because hungry wolves would be howling in the night by that time of winter. If you visit Wolf Hollow's Web page, you can hear their wolves howl. Exciting and a little spooky!

The Full Wolf Moon and Full Snow Moon have dramatic names suitable for Gothic romance novels. Next month is the charmingly named Full Worm Moon, which sounds suitable for a schlocky horror film from the 1970s. If you visit this page from BadMovies.org, you can hear killer worms screaming from Squirm, a 1976 cinematic trash classic.
1 comment:

It's official - we have six more weeks until spring starts. Miss G, Massachusetts' very own prognosticating groundhog, saw her shadow this morning, letting us know that we have more winter weather coming. (Of course, skeptics point out that spring always starts around March 20, which is always six weeks from Groundhog Day). National celebrity groundhog Punxsutawney Phil also made the same prediction from his home in Pennsylvania.

Clifton Johnson recorded folklore about weather predicting groundhogs in Western Massachusetts way back in the 1890s. It's generally believed that Groundhog Day originated with German settlers in Pennsylvania, so I wonder if the local Yankees picked up the tradition from newspapers and magazines.
1 comment: