A Pickle for the Knowing Ones: Lord Timothy Dexter 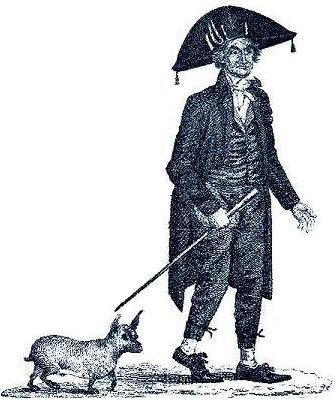 Work has been super busy, so unfortunately I didn't get to update my blog last week. So here, delayed a little bit, is my final post inspired by our trip to Newburyport. It's a town that has a lot to offer: ghosts, Bigfoot, and a famous American "nobleman."

Timothy Dexter was a Newburyport merchant who lived in the 18th century. The town had lots of merchants at the time, so that's not why he's famous. It's because he was so very, very, very eccentric.

When Dexter started his mercantile career his rivals, thinking him an idiot, deliberately gave him bad advice. Apparently being an idiot, Dexter took it, but through good luck things always worked out to his benefit.

For example, he sent a ship full of bed-warming pans to Jamaica, a tropical island where obvioulsy no one needed warm beds. However, the locals bought them as molasses dippers for the sugar plantations. On the same trip he also sent dozens of cats. Luckily, the island was experiencing a plague of rats and people snatched them up at high prices.

He later sent a shipment of mittens to Jamaica. Again, this would normally be a terrible decision, but Asian merchants visiting the port bought them to re-sell in Siberia.

Have you heard the saying, "Selling coals to Newcastle?" Newcastle was a coal producing area in England, so it means doing something pointless or doomed to fail. Dexter actually did ship coals to Newcastle. Once again, he was lucky. The miners were on strike, and his coal sold at a high price.

Dexter soon became one of the wealthiest merchants in Newburyport, which enfuriated the town's wealthy elite. They ostracized him, and in return Dexter, who was always a little eccentric, became downright outlandish.

He declared that he was a Lord, a title that was totally meaningless in the U.S. The title stuck, though, and most local historians now refer to him as Lord Timothy Dexter. 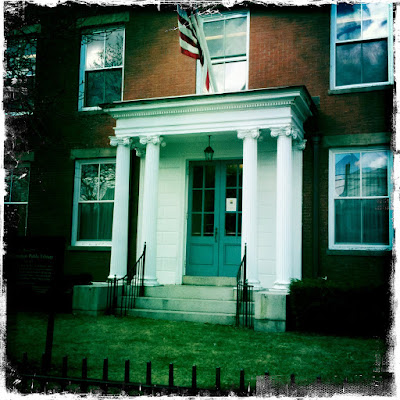 Lord Timothy's first large home in Newburyport
He bought a large house in town (now part of the public library), but when he upgraded to an even larger house he filled its garden with 40 statues of important historical figures like Adam and Eve, Napoleon, and himself.

He told everyone his wife had died, and the nagging woman they saw in his house was just her ghost. His wife was still very much alive.

He hired a large retinue of servants, which included a personal fortune teller, poet laureate, and a professional idiot.

To prove his philosophical learning, Dexter eventually wrote a book, A Pickle for the Knowing Ones or Plain Truth in a Homespun Dress. Here's a brief sample from this rambling tome, which contains no punctuation:

IME the first Lord in the younited States of A mericary Now of Newburyport it is the voise of the peopel and I cant Help it and so Let it goue Now as I must be Lord there will foller many more Lords pretty soune for it dont hurt A Cat Nor the mouse Nor the son Nor the water Nor the Eare then goue on all is Easey...

Although it's almost incomprehensible, it went through multiple editions. Was it Dexter's luck again? You can decide for yourself by reading the full thing online.

Later in life, Lord Timothy staged his own funeral so he could see how it would all play out when he really shuffled off this mortal coil. Although thousands (!) of people came, it didn't go to his liking. His wife didn't cry, which angered him so much he beat her. Honestly, what did he expect after telling everyone she was just a ghost?

Lord Timothy Dexter died in 1806, a few years after his mock funeral. There's no record of whether his wife cried, but I'm guessing she didn't.

I got a lot of this information from Joseph Citro's book Weird New England, and also from Wikipedia. This site, LordTimothyDexter.com, has a ton of information as well.
5 comments:

Email ThisBlogThis!Share to TwitterShare to FacebookShare to Pinterest
Labels: A Pickle for the Knowing Ones, Joseph Citro, Lord Timothy Dexter, Newburyport

This Monday is Patriots' Day, which has been celebrated since 1969 in Massachusetts and Maine to commemorate the Battles of Lexington and Concord. I'm sure there will be a big crowd in those towns this weekend to watch the historical re-enactors do battle. It's a fun thing for tourists to do, and I'm sure the reenactors enjoy pretending to be someone else for a day. It's their day in the spotlight!

If we were able to travel back in time to the Revolutionary War, and if we looked closely, we'd see that some people in the American Continental army were also pretending to be something other than they really were.

I'm talking, of course, about women who disguised themselves as men to join the army.

I don't know how many there were across the thirteen colonies, but there were at least two cross-dressing patriots from New England. The first, Ann Bailey, was a Massachusetts native who enlisted in August of 1777. Ann served under Brigadier General John Patterson in the Boston Regiment under the name Samuel Gay. Her pseudonym seems very appropriate to a modern reader, but stop that giggling - gay didn't acquire it's current meaning until the 20th century.

Unfortunately, Ann's gay time in the army didn't last very long. Her femininity was discovered, and she was arrested. For attempting to serve the young nation she was sentenced to two months in jail and fined sixteen pounds plus court costs. (Interestingly, there is another more famous Anne Bailey from Virginia who wore men's clothing and joined the army.) 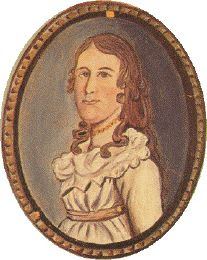 Deborah Sampson, 1760 - 1827
A different Massachusetts woman had a more successful military career. In 1782, Deborah Sampson joined the army under the name Robert Shurtleff. She fought admirably in several battles, and even treated her own wounds to avoid being discovered. Deborah eventually came down with a fever that she couldn't treat and was forced to seek help from a doctor. Surprisingly, he didn't reveal her secret and Deborah served until she was honorably discharged in 1787. Her true identity of course eventually came to light, but she still received pensions from the Commonwealth of Massachusetts and the United States, thanks to advocacy from Paul Revere.

What motivated these two ladies to cross-dress and join the army? Patriotism? Poverty? A need for adventure? And how do we fit them into modern categories like gay, straight, or transgendered?

Those are tough questions that I can't answer. Deborah Sampson did marry a man and have three children, but may have dallied with other women while she was disguised as a man. Herman Mann, the author of her 1797 biography, wrote the following:

To mention the intercourse of our Heroine with her sex, would, like others more dangerous, require an apology I know not how to make. It must be supposed, she acted more from necessity, than a voluntary impulse of passion.

I guess even then the official policy was don't ask, don't tell!

I got most of this information from the History Project's Improper Bostonians. Lesbian and Gay History from the Puritans to Playland. As always, the Web provides a wealth of information.
2 comments: 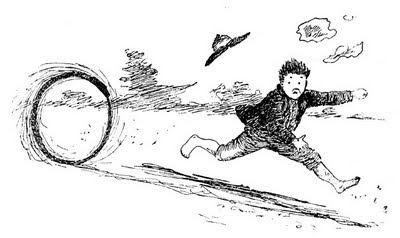 I have some more snake lore here, here, and here. I got today's information and picture from Clifton Johnson's What They Say In New England (1896).
1 comment:

Being a school teacher is a tough job. You need to deal with unruly kids, dissatisfied parents, and inadequate resources.

For Lucy Ann Perkins, Newburyport's school mistress in in the 1870s, the job was extra tough. In addition to the usual problems, she also had to deal with a school house that was haunted. It wasn't haunted in a gently spooky, "Oh! I saw a shadowy figure" type of way. Miss Perkins had to deal with full blown poltergeist activity. 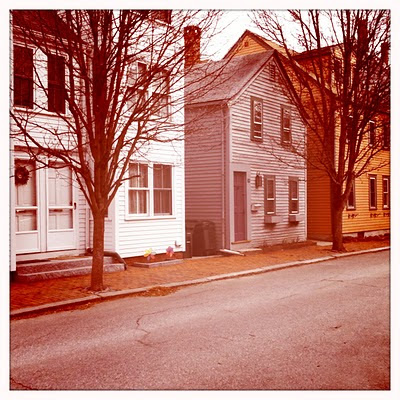 Newburyport - quaint or haunted? You decide!
Here are a few of the things she had to face:


Miss Perkins tried to instruct her students as best she could, but the supernatural happenings wore her nerves down. She was not alone. The janitor refused to enter the building, and many of the students were often terrified. Word eventually spread about the strange activities, and many visitors came to the school house. They were often rewarded with mysterious noises and seeing objects move on their own.

Eventually, Miss Perkins was sent on a vacation, and her duties at the school house were permanently given to one Nathan Moulton. The hauntings stopped.

What caused all the activity? Was there a real ghost or spirit involved? After investigating, the school authorities claimed the haunting was a hoax by Amos Currier, a ten year old student. However, local newspapers and pamphlet publishers claimed the hauntings were caused by an actual ghost.

Shortly after this, the schoolhouse was shut down and eventually converted to a single family home. When Tony and I visited Newburyport we unsuccessfully to locate it.

Poltergeist or hoax? Personally, I can't decide. It's always good to be skeptical about things like this, but I do wonder how a ten year old boy could have fooled so many adults, and created a phantom that disappeared when touched. And what about that howling wind?

My two main sources for this were Holly Mascott Nadler's Ghosts of Boston Town and John James Currier's History of Newburyport, 1764-1905.
2 comments: