The Whitehorse Tavern: Ghosts and A Pirate!

The historic Whitehorse Tavern in Newport, Rhode Island is on a lot of lists. It's on the National Register of Historic Places. It's on a list of the world's oldest restaurants, coming in at number 10. The Boston Globe recently placed it on a list of of the best places to eat in Newport. You get the idea. It's a historic and prestigious restaurant.

Those are some good lists to be on, but here's you should really care about: the 10 most haunted bars in America. There are a lot of haunted bars in this country, and the Whitehorse Tavern came in at number five. 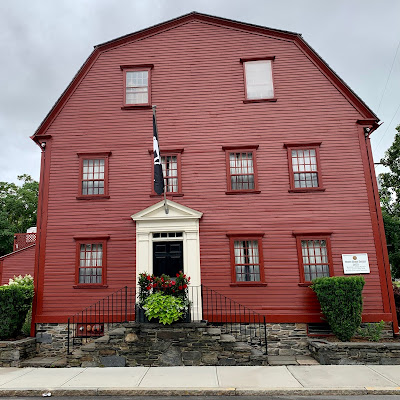 The Whitehorse was originally built in 1653 as a home for Francis Brinley, one of the early Newport colonists. Brinley sold the building in 1673 to William Mayes, Sr., who opened a tavern in it. His son, also named William Mayes, took over operation of the tavern in 1702. I don't think he paid too much attention to the business, though, since he also worked as a privateer for the English.

A privateer was basically a licensed pirate. Mayes had permission from the English government to attack and steal from French ships, since they were one of England's political rivals at the time. Later, Mayes just became a full-on criminal pirate and raided ships sailing in the Indian Ocean, no matter who they belonged to. 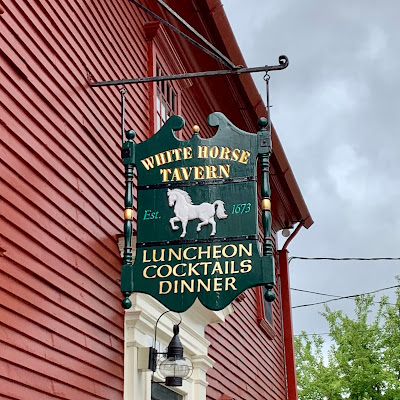 After a decade of sailing the high seas, Mayes returned to Newport and resumed his duties at the tavern. His sister, Mary Mayes Nichols, took over after his death, and the business remained in the Nichols family for nearly two centuries. It acquired the name Whitehorse Tavern in 1736. The building was briefly a boarding house in the early 1900s before once again becoming a tavern.

Hotels, restaurants, and bars often have ghost stories attached to them. It makes sense (if you believe in ghosts). Lots of people move through buildings like that, and they leave their spiritual mark on the place. The Whitehorse has been in use for almost four-hundred years, and many people have stayed there in its incarnations as a tavern and a rooming house. A lot of lives have been lived there, and some have probably ended there too. 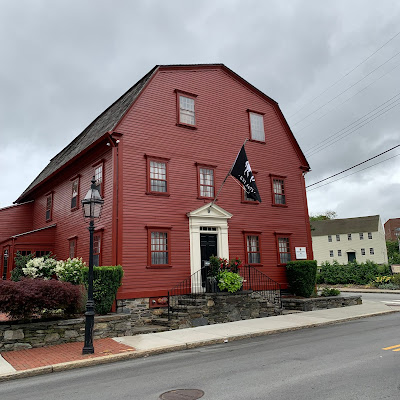 One ghost haunting the Whitehorse is said to be the spirit of an elderly overnight guest who died many years ago. He now wanders through the tavern in Colonial-era clothing, and is often seen by staff and guests near the fireplace in the dining room. He's also been seen in one of the bathrooms. HauntedHouses.com, which has a nice writeup about the Whitehorse, notes that this ghost sometimes pesters female guests, which is creepy, and not in a supernatural way.

Other ghosts haunting the premises include a young girl who cries, and a presence that watches over the tavern and its staff. The latter is said to be mostly benevolent, and might possibly be the spirit of a former owner. This is something often reported at other long-running restaurants - business owners like to keep working after their deaths. For example, see my 2019 post about Local 186 in Provincetown.

The Whitehorse is only open for dinner this summer, so Tony and I weren't able to go inside during our recent Newport day trip. Maybe next time we'll get to try the food - and try to see a ghost in the bathroom.

This is totally unrelated to the Whitehorse Tavern, but I wanted to share some exciting news. I have a new book coming out in September. Here's the cover:

As you can probably guess, Witches and Warlocks of Massachusetts is about... well, witches and warlocks from the Bay State. For many years I looked for one book with all the local witch stories. I never found one, so I wrote it myself. It contains dozens of legends, historical accounts, and paranormal encounters, dating from the 1600s to the 21st century. So much witchcraft!

Although the book doesn't come out until September, you can pre-order it on Amazon, Barnes and Noble, Bookshop, and Books A Million. Why delay? You know you'll want a copy as soon as the nights start to get longer...

This weekend Tony and I took a quick day trip to Newport, Rhode Island. It was cool and rainy, which is perfect weather for exploring historic seaports with a history of strange happenings.

One sight I really wanted to see was the Newport Tower, located in Touro Park. The Newport Tower is an old stone structure that has stood for centuries on a hill overlooking the harbor. It is protected by an iron fence these days so sadly you can't get too close to it. There are several theories about about who built the tower, and why they did so. 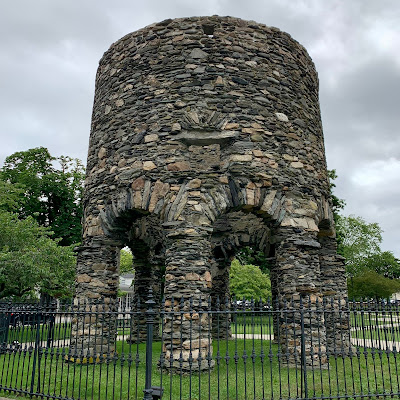 For example, it is sometimes called the Viking Tower. In the early 19th century, a Danish archeologist theorized the tower was erected by Norse explorers who came south to Rhode Island from Vinland (the Canadian provinces of Newfoundland and New Brunswick) centuries before Columbus visited the New World. I am not quite sure why the Vikings would have built such a tower, but the theory was quite popular.

In the 19th century, many Anglo Americans embraced the theory that Vikings had journeyed far down the Atlantic coast. As I mentioned a few years ago, some even believed there had been a vast Viking metropolis along the banks of the Charles River in Massachusetts, where Boston and Cambridge now stand. This simply isn't true. The only known Viking settlement in North America was in Newfoundland, which only supported around 150 people, and only lasted for a few years. There's no evidence for Viking settlements in New England.

Nineteenth century Anglo-Americans were open to the Viking theory for political and cultural reasons. Many of them were disturbed by the large number of Catholic immigrants entering the US from southern Europe at the time. They also didn't like that Christopher Columbus, an Italian Catholic working for Spain, had been the first person to open up North America to European colonization. They wanted to believe a Northern European, like themselves, had done this first. While it is true that Vikings reached North America long before Columbus, they made very little impact and didn't stay very long.

Back to the Newport Tower. The Viking theory was just the first of several theories claiming the tower had been built by some forgotten European explorers who came before Columbus. Perhaps the tower was built by Irish monks in the 6th century. Or maybe it was the Portuguese. Some people have even suggested it was the Knights Templar, fleeing to North America from persecution in the 14th century. The New England Antiquities Research Association has an extensive monograph outlining the various theories here. 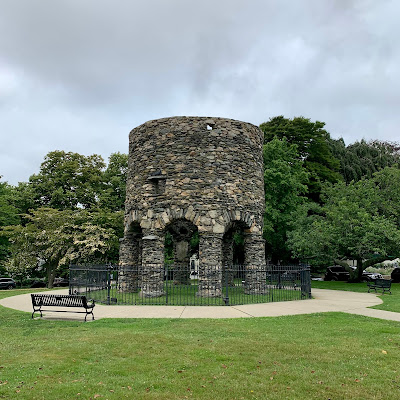 Unfortunately, there's no good evidence to support any of them. There isn't any evidence that Irish monks or the Knights Templar came to Rhode Island before Columbus, and most historians and archaeologists believe the Newport Tower was actually built by Benedict Arnold, the first royal governor of Rhode Island, sometime in the 17th century. (Note: Benedict Arnold's great-grandson, also named Benedict Arnold, was the notorious Revolutionary War traitor.)

Arnold refers to a "stone-built mill" in his will, and the Newport Tower is located near the site of Arnold's home. Documents from the early 18th century refer to "the old stone mill," and carbon-dating suggests the tower's mortar dates to the late 17th century. The tower is similar to other stone mills in England, and archaeological excavations at the tower didn't unearth any artifacts older than the colonial era. 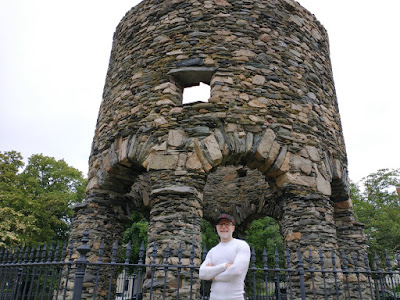 I think the evidence indicates pretty clearly that this tower was built by Benedict Arnold (or someone hired by him). Surely someone in 17th century Newport would have mentioned discovering a giant stone tower of unknown origin when they settled the area, but they didn't. Instead, they mention a mill built by Governor Arnold. Not everyone may share my opinion, but I think a 350 year old stone windmill is still pretty cool, even if it wasn't built by Vikings.
4 comments: