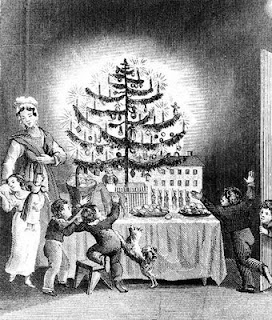 However, the first printed image of a Christmas tree in the U.S. was titled "Christmas Eve", and was engraved by Herman Bokum, a German immigrant who taught at Harvard. It appeared in 1836 in The Stranger's Gift, a Christmas gift book. Amazingly, you can see a facsimile of the entire book online at Google Books!
1 comment:

Here's a way to predict the weather for the upcoming year.

According to one of Clifton Johnson's 19th century informants, the weather on each of the twelve days of Christmas predicts what the weather will be for the coming twelve months. I'm assuming they mean only in terms of sunshine, precipitation and cloud cover. Otherwise, for this system to work January 1st would have to be hot and humid to accurately predict August weather. Even with global warming that's not going to happen (yet)!

Christmas in the past, according to Stephen Nissenbaum, used to be an amorphous season that sometimes lasted for months. I'm not sure where the concept of twelve days of Christmas first originated, but there are lots of significant twelves in the world: twelve months, twelve signs of the zodiac, twelve apostles, twelve tribes of Israel, twelve Olympian gods, twelve imams., etc. I recall learning that there was once a numerical system based on the number twelve, from which we get twelve inches in a foot, twelve items in a dozen, and twelve dozen in a gross. Wikipedia (of course) has an article about the number twelve.
13 comments:

The Drunken Christmas of Old

According to historian Stephen Nissenbaum, Christmas in the past was a very different holiday. Instead of kids opening presents, rowdy bands of drunken laborers roamed from house to house, singing songs and demanding gifts of food, money and alcohol. Sometimes they wore costumes and performed skits (a practice known as mumming), sometimes they would just sing songs that demanded gifts (an ancestor of modern Christmas caroling known as wassailing).

The Puritans discouraged the celebration of most holidays in New England, but particularly Christmas, claiming it was too disruptive and did not have basis in the Bible. From 1659 - 1681 it was actually illegal to celebrate Christmas in Massachusetts, but long after that law's repeal (under pressure from England) Christmas celebrations were still frowned upon. Massachusetts didn't legally recognize Christmas as a holiday until 1855.

But many people still celebrated Christmas, despite disapproval from political and religious leaders. An article in the Journal of American Folklore from 1896 describes a visit by Christmas mummers in the 1700's, a time when "Christmas was not kept." The article is based on recollections of a woman who was born in 1752.

Men wearing masks and carrying swords came to her parents' house, and performed a skit involving combat, a miraculous cure for the injured combatant, and nonsensical questions. The skit featured these lines:

Here comes I who never came yet
Great head and little wit,
And though my wit it is so ill,
Before I go I'll please you still.

From the description, it seems as though the men were performing a version of a traditional British play about St. George.
1 comment:

According to Ben Franklin's older brother James, evil witches can't harm anyone with their spells during Chrismas. (This quote from his 1729 almanac comes from Stephen Nissenbaum's The Battle for Christmas.)

This month (December) is a great Enemy to evil Spirits, and a great Dissolver of Witchcraft, without the help of Pimpernal, or Quicksilver and Yellow Wax... Some Astrologers indeed confine this Power over evil Spirits to Christmas Eve only; but I know the whole Month ahas as much Power as any Eve in it: Not but that there may be some wandering Spirits here and there, but I am certain they can do no Mischief, nor can they be seen without a Telescope.

Surprisingly in some old Northern European folklore, December and Christmas in particular are actually times when mischievous spirits roam freely, similar to Halloween here in the States. This tradition was even found in England, where it was believed ghosts walked at Christmas (a belief that Dickens later worked into A Christmas Carol). James Franklin seems to be quoting another, contrary tradition here, but both point to the overall remarkable characteristics people attribute to the holiday season.
1 comment:


There's a big full moon out tonight, which is visible since the sky is clearing up. Traditionally, this moon is called the Full Cold Moon, for reasons obvious to anyone who had to deal with the giant ice storm that swept through the area. Another name for this moon is the Full Long Nights Moon, again for obvious reasons.

No Thor's Day in Boston

I've started reading Stephen Nissenbaum's The Battle for Christmas again. Probably one third of the book covers what Christmas was really like in New England before the industrial revolution. It's a very eye-opening book! Not a lot of sleigh-riding and merrymaking went on back then, but there was some drunken rioting and class warfare.

One interesting factoid I picked up: the New England Puritan's omitted the names of weekdays from their almanacs, since they referred to pagan Germanic gods. For example, Thursday is derived from Thor's Day, Wednesday comes from Woden's Day.

Did they give the days new names, or just leave them blank? I searched the Web for an answer, but only found more mysteries. According to this author, the Puritan almanac makers also omitted the names of months for the same reason. For example, March is named after Mars, and January is named after Janus. No pagan influence allowed!

I'd love to know if they gave months and days new names, but its possible they just assigned numbers instead. Either way, it must have been confusing.

Harvard Should Consult Its Magic Books

Last week the media was full of news about Harvard losing a big chunk of its endowment due to the recession. Some writers were gloating, while others were concerned about possible layoffs among the Harvard staff. I definitely have sympathy for the Harvard staff, since I work at a university myself.

I guess the money managers at Harvard didn't consult the stars for guidance, the way some earlier Harvard staff might have.

According to D. Michael Quinn, author of Early Mormonism and the Magic World View, divination and practices we now consider "occult" were a standard part of the curriculum at New England colleges before the 19th century. Harvard students learned how to use astrology as part of their medical training, and a working knowledge of astrology was crucial for anyone getting a BA or Master's degree. Harvard students wrote theses on astrology and alchemy as late as 1771, and many Harvard student continued practicing alchemy into the 1800's.

Not to be left out of the Ivy League magic, students at Yale studied astrology and alchemy as well, and Yale's president Ezra Stiles experimented with alchemy and studied the Cabala.

1. Yale and Harvard were founded to train Christian ministers, but the faculty clearly saw no conflict between the occult and Christianity. How times have changed!

3.Early Mormonism and the Magic World View is a great and very informative book, with lots of detail about how occult practices were woven into the everyday lives of early Americans. Joseph Smith, the founder of Mormonism, was born in Vermont and D. Michael Quinn shows how some of Smith's religious practices were influenced (or even identical to) magical practices in New England and New York. I think this book is one of the reasons Quinn was kicked out of the Mormon Church.
1 comment: