The Grave of Susanna Jayne: Bats, Angels and the Grim Reaper

Marblehead is one of the prettiest towns in Massachusetts, with an amazing and historic downtown, dramatic ocean views, and streets full of Colonial-era homes. Lots of people visit it for these reasons, but this past weekend we went for a different one: to see the grave of Susanna Jayne. 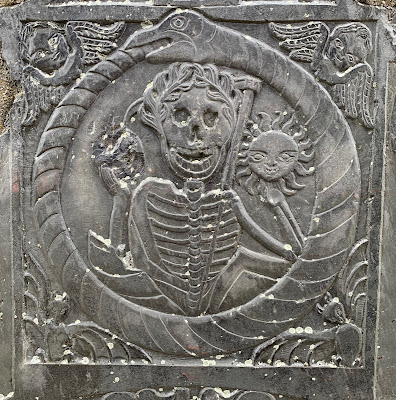 Like so many coastal New England towns, Marblehead is quite old. It was founded in 1635 as a fishing village by English colonists, and its first cemetery, Old Burial Hill, was established three years later. Old Burial Hill is located on a rocky outcrop overlooking the town center and the harbor. This was also the site of Marblehead's first meeting house (the Puritan term for a church). The meeting house is long gone, but the cemetery remains. 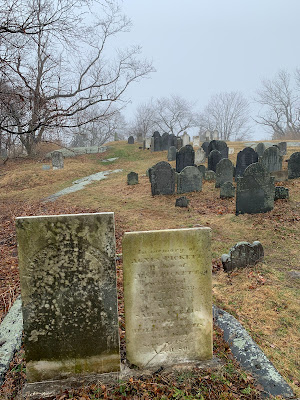 We were lucky enough to visit on a rainy, foggy day. Our stroll through Old Burial Hill was really atmospheric due to the mist and wet weather, which also kept a lot of people indoors. We we had the place to ourselves. This was my first time visiting Old Burial Hill, and it's already one of my favorite cemeteries. 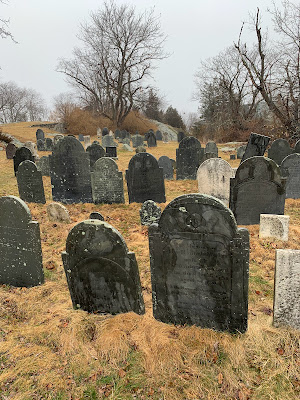 Old Burial Hill was one of the locations for the movie Hocus Pocus, which draws some tourists. Nearly 600 Revolutionary War veterans are buried there, which is another draw, but we had come particularly to see the grave of Susanna Jayne. The wife of Peter Jayne, a local schoolmaster, Susanna died in August of 1776. Her epitaph reads:

Deposited Beneath this Stone the Mortal Part of Mrs. Susanna Jayne, the amiable Wife of Mr. Peter Jayne, who lived Beloved and Died Universally Lamented, on August 8th, 1776, in the 45th Year of her Age.

Many of the gravestones I visit have some legend associated with them, but there isn't a legend attached to Susanna Jayne's grave. It's just an incredibly beautiful headstone with lots of symbolism that, to the modern eye, is very gothic.
in stone to preserve it.
The headstone was carved by Henry Christian Geyer (1727 - 1785), a Boston artisan who made many other Massachusetts gravestones. Some of Geyer's work follows standard styles popular at the time, while others, like Susanna Jayne's gravestone, are quite creative. 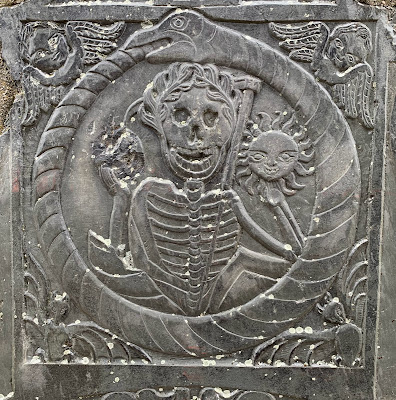 The centerpiece of Jayne's headstone is this carving of the Grim Reaper, portrayed as a skeleton holding a scythe. The skeleton is crowned with laurel wreaths, and holds the sun in one hand and the moon in the other. (Sadly, the moon has been damaged.) Overall, the message is one of Death triumphant and the passage of time.
The Grim Reaper is encircled by snake biting its own tail. This image, known as the ouroboros, is a symbol that dates back to the ancient Egyptians and was found on the wall of King Tut's tomb. It's had many meanings over the centuries, but most commonly represents eternity and the cycles of time. More time symbolism appears at the top of Susanna Jayne's headstone, where Geyer carved an hourglass framed by two bones. Time passes, and Death takes us all. 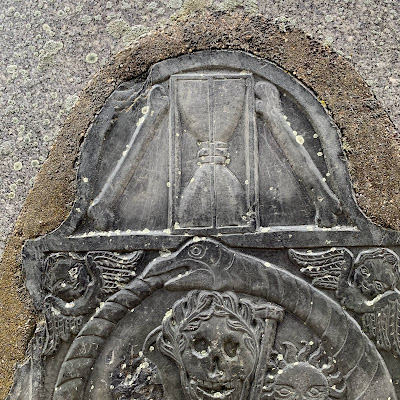 However, the universe is not purely mechanistic and grim. There's a moral aspect, symbolized by the angels and bats that hover around the corners. Good and evil play a role in the eternal drama as well. 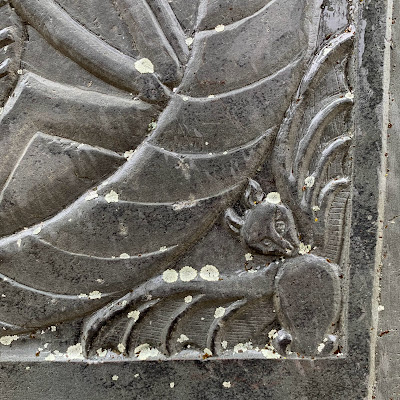 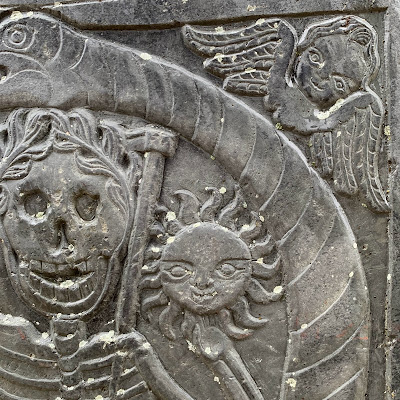 Modern gravestones are quite subdued these days, and very plain. I miss the artistry and symbolism of the older headstones. Susanna Jayne's gravestone is a work of art, and was actually photographed by the well-known artist Ansel Adams. If you'd like to see some beautiful New England art, I'd recommend taking a trip to Old Burial Hill. 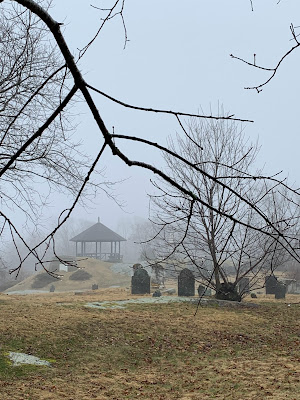 You can read more about Susanna Jayne's gravestone here. More details about Henry Christian Geyer can be found here.
No comments:

The Ghost of Central Burying Ground

Boston is one of the oldest cities in America. It was first settled by the Puritans in 1630, and downtown Boston has some fine old cemeteries that reflect the city's age. Copp's Hill Burying Ground, the Granary Burying Ground, and King's Chapel Burying Ground are the resting places for patriots, Puritans, founding fathers, and possibly even Mother Goose.

Those three cemeteries are amazing places to visit, and if you haven't been you should go today! They're also quite popular with tourists. But if you want a quieter, spookier, cemetery experience you should visit Central Burying Ground. It's the least popular of the four downtown cemeteries, but definitely has its own particular charms. 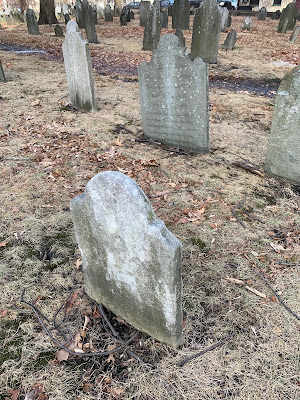 I visited Central Burying Ground recently on a warm Saturday. I was meeting a friend downtown and arrived early, so I decided to kill some time wandering around the cemetery. It's located on Boston Common right next to the Boylston T station, but despite its convenient location very few visitors were there that day. There were only two people other than myself: someone feeding squirrels, and an Emerson student sitting on a crypt smoking a cigarette.

At first I wasn't even sure it was open to tourists. Most of its gates were locked, and it took me a while to find the one open entrance. But once I was inside I had the cemetery mostly to myself.

Central Burying Ground is the newest of the four old cemeteries. It was established in 1756, and is the resting place of British soldiers who died during the Revolution, American patriots from the Battle of Bunker Hill and the Boston Tea Party, composer William Billings, and painter Gilbert Stuart. Stuart is well-known for his portraits of George Washington, and is probably the most famous person buried there. 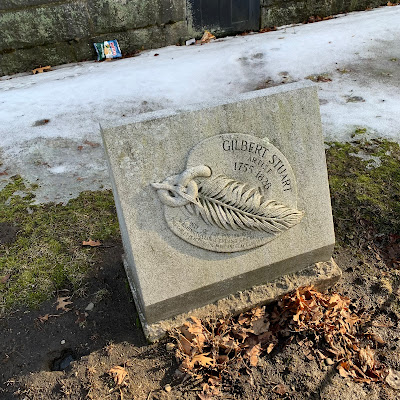 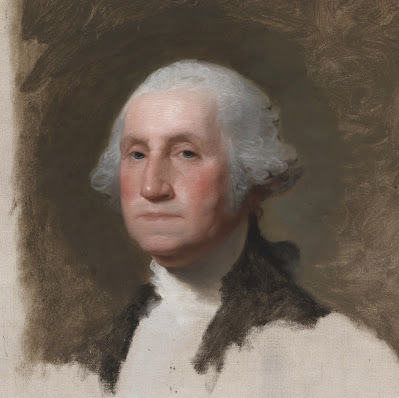 According to local lore, Central Burying Ground is also home to at least one ghost. In the 1970s, a local dentist named Matt Rutger was walking through the cemetery on a pleasant spring day when he had a strange encounter. He was alone in the cemetery, but kept feeling someone tapping him on the shoulder. There was no one behind him when he turned around. The weird tapping continued, until finally he felt someone grab him by the collar and pull him backwards. Again, there was no one there. 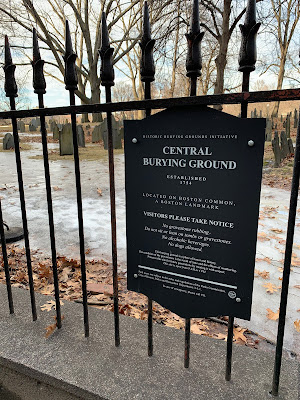 Rutger was understandably disturbed, so he began to walk quickly towards the cemetery gates. As he did, he saw something odd.

"'I saw a young girl standing motionless in the rear corner of the cemetery, staring at me intently.' She wore a white dress, and her utter immobility in and of itself seemed eerie. Dr. Rutger turned in the opposite direction, but, to his amazement, the girl instantly relocated to the front of the cemetery, nearly fifty yards from where she'd stood only moments before. Dr. Rutger changed directions a couple more times, and each time the ghostly figure cropped up at a different station. Finally he made it to the sidewalk, but as he strode away he felt a hand slip into his pocket. He watched in amazement as his car keys levitated free of his pocket, dangled in mid-air, then fell with a jingle to the ground." (Holly Mascott Nadler, Ghosts of Boston Town, 2002).

That's quite the encounter. Rutger is not the only person who's encountered a ghost at Central Burying Ground. According to Sam Baltrusis's Ghosts of Boston (2012), other visitors have reported seeing a ghostly young girl in the cemetery, and one woman on a tour even became annoyed because she thought a fellow tourist was tapping her on the back. No one else had touched her, though. Some visitors have also said that someone (or something) grabbed their keys from their pockets. The ghost is apparently quite consistent.

No one has identified the ghost who haunts Central Burying Ground. Many of the cemetery's graves have been disturbed by construction, so if you believe in ghosts perhaps that is what causes the alleged haunting. For example, in 1836 many bodies were moved to new tombs to accommodate a Boylston Street extension, and in 1895 many bodies were found in unmarked graves during construction of the subway line. They were re-interred in a large mass grave in the cemetery's northwest corner. No one likes to be awoken rudely from their sleep, right?

I did not see anything strange when I visited, but just had a peaceful cemetery stroll. I'd definitely recommend going to Central Burying Ground if you are interested in ghosts, or just want to enjoy a quiet space in the busiest part of the city.