The Ghost of Enoch Pratt

Back in the 1700s a wealthy farmer named Jeremiah Caswell lived in Littleton, Massachusetts. He owned many acres of fertile cropland, as well as an extensive apple orchard. Jeremiah had a son named Adam, and a daughter named Eve. Eve was quite beautiful.

When she was a young woman, Eve fell in love with Enoch Pratt, a hard-working farm boy from a modest background. They would meet illicitly almost every night in the apple orchard, where they were safe from prying eyes. Eve was afraid that her father would disapprove of their love.

One night Jeremiah secretly followed his daughter out to the orchard and saw her meet Enoch. To the young lovers' surprise, Jeremiah saw they were genuinely in love and gave his blessing. Eve and Enoch became engaged. 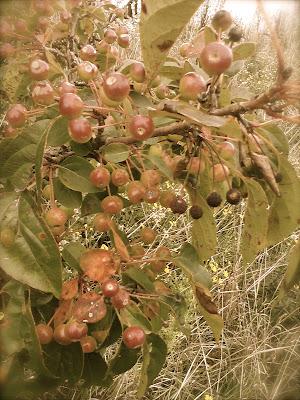 Before they could celebrate their wedding, however, Enoch was called away with other local men to fight in the the French and Indian War, which was raging to the west.

The might before he departed, he and Eve met once again in the orchard. "Swear to me you'll return," Eve said.

Holding her tight, Enoch said, "I will, in body or spirit."

Enoch left for the war, and a few months later word came to Littleton that he had been killed in the fighting. Eve was devastated by the news but carried on with her duties on the farm.

One night, as she was walking by the orchard, she heard someone calling her name. It was Enoch! Eve was overjoyed and ran to greet him, thinking that his death was falsely reported. 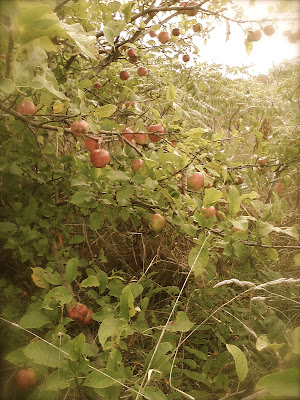 As she wrapped her arms around Enoch, though, she noticed that his body was unnaturally cold, and that his eyes stared lifelessly. Enoch did die, and his ghost had returned to Littleton. Terrified, Eve ran to her father's house and told him what she saw under the apple trees.

And do you know what her father said?

He said, "If you vowed to meet him, Eve, you must meet him, in the flesh or in the spirit."

Eve returned to the orchard that night and consummated her marriage with Enoch. All through that fall and winter Enoch called out her name from the apple orchard, and Eve would dutifully leave her bed to join him under the dark trees. Eve became weaker and weaker, and finally died when the spring came.

Although Eve passed over to the other side, Enoch's ghost lingered in Littleton. Locals reported seeing him throughout the 1800s, calling Eve's name in the woods and orchards. His ghost was even seen in the Caswell house.

His ghost was last seen in 1975, when a Littleton man who had been walking in the woods reported seeing a twenty year old man with his black hair pulled back, dressed in Colonial attire, with a mournful look in his eyes.
1 comment:

The Devil Is In My Pudding!


I apologize for another post about Indian pudding, but I have realized that I was lucky last week - the Devil didn't interfere with my pudding! This apparently was a problem our New England ancestors had to deal with.

For example, here is an article from the March 19, 1722 issue of the the New-England Courant.

We are at present amus'd with a very odd Story from Martha's Vineyard, which however is affirm'd for a Truth by some Persons lately come from thence, viz. That at a certain House in Edgar Town, a Plain Indian Pudding, being put into the Pot and boil'd the usual Time, it came out of a Blood-red Colour, to the great Surprise of the whole Family. The Cause of this great Alteration in the Pudding is not yet known, tho' it has been Matter of great Speculation in the Neighborhood.

Things must have been pretty quiet in Edgartown if a red Indian pudding was considered newsworthy. But why did the pudding turn red? This next story, from the May 25, 1767 issue of the Boston Evening-Post, provides a possible (and Satanic) explanation for unusual puddings.

They write from Plymouth, that an extraordinary Event has lately happen'd in the Neighborhood, in which, some say, the Devil and the Man of the House are very much to blame. The Man, it seems would now and then in a Frolick call upon the Devil to come down the Chimney; and some little Time after the last Invitation, the good Wife's Pudding turn'd black in the boiling, which she attributed to the Devil's descending the Chimney, and getting into the Pot, upon her Husband's repeated Wishes for him. Great Numbers of Peoples have been to view the Pudding, and to enquire into the Circumstances; and most of them agree, that the sudden Change must be produc'd by a Preternatural Power. But some good Housewives of a Chymical Turn assign a Natural Cause for it. However, 'tis thought, it will have this good Effect upon the Man, that he will no more be so free with the Devil in his Cups, lest his Satanick Majesty should again unluckily tumble in the Pot.

1. People lived in a world where supernatural entities played a very active role.

2. No one had TV or the Internet, so strange baking mishaps provided a lot of entertainment.

Next week, I'll write about something other than Indian pudding. I promise!


It was kind of cold here yesterday, and we actually had a few snowflakes. Most of this winter has been freakishly mild, but yesterday it finally felt like the temperature matched the season. To celebrate I decided to make Indian pudding.

As a lot of people know, and I've written here before, New England Indian pudding doesn't have anything to do with the flavorful and spicy cuisine of South Asian. Despite its name it's really an old Puritan dish that has been made in this area for hundreds of years.

When the Puritans came to North America they brought their love of puddings with them. Wheat flour is one of the key ingredients of English style puddings, but unfortunately wheat didn't grow well in New England. Not wishing to be deprived of pudding the Puritans adapted their recipes to incorporate Indian corn (maize) and voila! Indian pudding was born.

No. 2. 3 pints scalded milk to one pint meal salted; cool, add 2 eggs,
4 ounces butter, sugar or molasses and spice q. f. it will require two
and half hours baking.

No. 3. Salt a pint meal, wet with one quart milk, sweeten and put into
a strong cloth, brass or bell metal vessel, stone or earthern pot,
secure from wet and boil 12 hours.


I'm amazed to see that number three takes twelve hours to cook! Wow! These are the oldest Indian pudding recipes on record, and obviously come from an era when cooking was much more difficult.

Most modern recipes for Indian pudding have four key ingredients: cornmeal, molasses, milk, and spices. I used this recipe from New York Times writer Mark Bittman. It didn't take 12 hours, but it did take about two and half.

Like a lot of other recipes I have seen, one key step is to pour some milk directly on top of the pudding and then put it in the oven without stirring.

Somehow it all magically works and it gives the pudding a nice texture. Do any foodies out there know why this is?


Indian pudding is not what you would call a glamorous dish. When it comes out of the oven it's brown and kind of goopy looking. It was really delicious though!

Which is scarier - a ghost, or an evil witch? If you visit Southwest Harbor, Maine you don't have to choose because it's haunted by an evil witch's ghost. You'll get two supernatural creatures for the price of one!

Sally Somers was born in 1791 to Elsie Somers, a witch who was known for extracting tribute from sea captains to guarantee safe passage of their ships, but also for using herbs to heal the sick. I suppose you could call Elsie morally neutral, since she was just trying to make a living from her dark arts.

Sally, on the other hand, was just no damn good.

Sally bewitched a young man named John Clark into marrying her. He spent much of their marriage wandering around in an enchanted, zombie-like daze. John tried to escape Sally's spell by booking passage on a ship bound for Europe, but disappeared before the it set sail. Everyone suspected Sally, but since his body was never found she wasn't charged with a crime.

According to another legend, Sally sacrificed two black dogs on the top of a nearby mountain so she could assume their form when she sent her spirit out to cause mischief. These devil dogs roamed through the area, terrifying the locals and sometimes drinking blood. Creepiest of all, they were said to have human eyes.

Like all successful witches, though, Sally's preferred to take the form of a black cat when she wanted to cause trouble. In this shape Sally would spy on her neighbors and find out if anyone was gossiping about her. Those who did usually came to a bad end. This black cat was also said to have human eyes.

Sally's reign of terror ended when one of her neighbors, tired of all the witchy shenanigans, fashioned a silver bullet and shot the spectral black cat. It died instantly, and Sally passed away three days later.

That was in 1832, but Sally's malefic influence supposedly still lingers around Southwest Harbor. The apples that grow on a tree near her house allegedly cause illness, accidents and even death to anyone who eats one.

In 2004, a woman named Daisy Harper was concerned for her mother's well-being because she was working in Sally's former home. Hoping to appease Sally's ghost, Daisy dropped an offering of colored stones into a crack in the apple tree's trunk. The stones fell for a long, long, long time before they hit the bottom. I don't think we want to know what's lurking under Sally's tree.

Daisy had good reason to be concerned about her mother. The furniture in Sally's house sometimes moves on its own, and it's said that anyone who breaks a pane of glass will die shortly afterwards. One window that overlooks the harbor even has an imperfection in it that looks like a witch.

If you ever go hiking near Southwest Harbor, be careful. The locals say a large black cat with human eyes haunts the woods. I guess Sally's spirit is still out there causing trouble.

I found this story about Sally in Marcus LiBirzzi's Ghosts of Acadia. If you like lurid stories about ghosts, this is the book for you.