Maine, Vermont and New Hampshire Among the Top States for UFO Sightings

I feel like UFOs are having a resurgence these days. They've been showing up in all kinds of media, most recently in The New York Times in late May, which reported that U.S. Navy pilots witnessed strange flying objects over the East Coast from the summer of 2014 until March 2015.

You know something is serious when it is in The New York Times, and it's really serious when they include video footage. If you haven't seen the video (which was taken by the pilots) I suggest taking a peek. It's pretty impressive and maybe a little spooky.

In addition to those two objects (one that spins like a top and one that seems to be smaller and speeding above the ocean) The Times earlier published a video in 2017 of a 40 foot long oval object that hovered above the ocean. Again, it was seen by Navy airmen, and the video was released by the Defense Department's Advanced Aerospace Threat Identification Program. That sounds pretty serious, but everyone involved from the military to the media has been careful to note that there is probably a terrestrial explanation for these sightings. The pilots who saw the objects expressed amazement about their experience, not fear, which is reassuring. It doesn't sound like we're going to be invaded by extraterrestrials anytime soon. 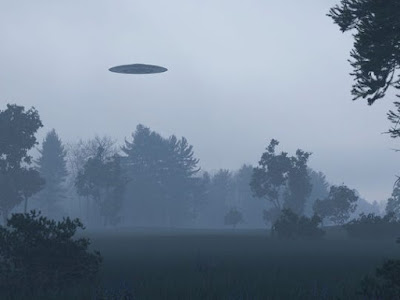 I suppose there could be some natural explanation for these UFOs, or they might be secret experimental aircraft from the United States or another country. However, as I've pointed out before, people have seen weird things in the sky for hundreds of years. It's unlikely any country was developing advanced flying craft in the 17th century. For now I think these Unidentified Flying Objects will continue to remain unidentified.

If you want to see one head north. The best places to see UFOs in New England are Vermont, Maine and New Hampshire. In fact, according to USA Today, those are some of the best places to see UFOs in the entire country. Of the fifty states, Vermont is ranked first in UFO sightings, with 80.8 sightings per 100,000 people between 2001 and 2015. Maine came in third nationally, and New Hampshire fifth. The other New England states did not crack the top ten. Step it up, Rhode Island, Connecticut and Massachusetts!

It's important to note that other states had more overall sightings. California had the most overall sightings with 15,836 followed by Florida with 7,787. Those are both very populous states, though, so the three northern New England states still each had a higher ranking per person. USA Today does note that sightings wane during the winter in the north (because people stay inside during the cold nights) but for some reason Vermont, Maine and New Hampshire still are all in the top ten.


One possible factor the article mentions: those states all have reasonably good internet service. Most UFO sightings are reported online these days, and if you're not online you can't tell people about the weird thing you saw hovering above the woods. That's a possibility. Maybe, though, the answer is just this: New England has always been a weird place and it continues to be one. A high likelihood of seeing a UFO is just one of the nice things about living here.
1 comment:

The Venus Glass, or Fortune-Telling with An Egg

The Puritan ministers who dominated early New England really hated magic. Their hatred of witchcraft is well known, but they didn't even like simple folk magic or fortune-telling.

They warned their parishioners against using magic in sermons and  pamphlets, and from these documents we know what type of magic was being practiced at the time. Because the ministers weren't just complaining about an imaginary problem. They were complaining about forms of magic that people were actually using.

Various forms of fortune-telling were common because, like all humans, the early New Englanders were interested in learning about their futures. Palm-reading and astrology were as popular in the 17th century as they are now, but some other types of divination popular then are barely practiced at all today. For example, here is what Reverend Deodat Lawson complained about in 1692: "the Sieve and the Scissors, the Bible and the Key, and the White of an Egg in a Glass." 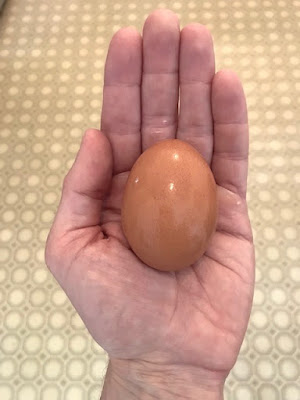 Cotton Mather had preached against those same types of magic three years earlier:

A sieve and scissors. A Bible and a key. An egg in a glass. Your average 21st century psychic is more likely to use Tarot cards, but those other three types of magic were very popular in the 17th century. They were discussed by many ministers and also come up in the witchcraft trial records. I've written about the Bible and key and sieve and scissors before, so today I'm focusing on using an egg and a glass.

Technically, fortune-telling with an egg is called ovomancy but the New England Puritans called the practice "the Venus glass." Venus is the planet that astrologically rules matters of love, and the English colonists used an egg in a glass to predict who they would marry. Therefore the practice was called the Venus glass. It was used primarily by young women.

It worked something like this. You would separate the egg's white from its yolk and then slip the white into a glass of water. Being a colloid, the white would form shapes as it floated in the water. These shapes would be examined to determine the career of one's future husband. For example, if the egg white looked like a ship, your husband would be a sailor. If it looked like a plow, your husband would be a farmer, etc.

You get the picture. It seems pretty harmless to me, but not to the ministers of the 17th century. Reverend John Hale of Beverly, Massachusetts described two times when using the Venus glass went horribly, horribly wrong.

In the first case a young woman "did try with an Egg and a Glass to find her future Husband's calling; till there came up a Coffin, that is a Spectre in the likeness of a Coffin. And she was afterward followed with a Diabolical molestation to her death; and so died a single person. A just warning to others, to take heed of handling the Devil's weapons, lest they get a wound thereby."

Take note. Not only did this poor woman die after using a Venus glass, she died single, which was one of the worst things that could happen to a woman in patriarchal Puritan society.

In the other case, Reverend Hale spoke with one of the afflicted girls of the Salem witch trials. This girl confessed that before she had become afflicted by witches she had used a Venus glass to learn about her future husband. After she confessed this to Reverend Hale she was "speedily released from those bonds of Satan." At least this time there was a happy ending.

So consider yourself warned. If you get tempted to use the Venus glass, maybe you should just make an omelet instead.

My sources for this week's post: Richard Godbeer's The Devil's Dominion: Magic and Religion in Early New England and John Hale's A Modest Enquiry Into the Nature of Witchcraft.
6 comments:

Shadrack Ireland and The Immortality Cult

In the 1730s and 1740s a new religious movement swept across the colonies. Historians now call it the First Great Awakening, since it was the first of many emotionally charged religious revivals that occurred in America. During the First Great Awakening traveling evangelical ministers crossed the region preaching fire-and-brimstone sermons to large crowds. One famous evangelical of the time, George Whitefield, delivered more than 18,000 sermons. People passed out from overwhelming emotion when he spoke. Whitefield stirred up strong religious feelings wherever he went.

Shadrack Ireland, a pipemaker in Charlestown, Massachusetts, was one of those people who heard Whitefield speak. It had a strong effect on him, and afterwards Ireland declared that something had changed in his mind and body. He realized that he was now perfect and immortal. He was never going to die.

Ireland started to preach to anyone who would listen. According to Ireland, people needed to practice celibacy. No sex please! Only those who had achieved perfection could take spouses and have intercourse. And since they were perfect, they could even take second "spiritual" spouses if they were married. Rules about adultery no longer applied to those who were perfect (like Ireland).

Shadrack Ireland left his wife and six children and moved to Grafton, Massachusetts where he gathered a small group of followers. The authorities in Grafton didn't appreciate his heretical teachings and pressured him to leave. He went to nearby Harvard, where his followers built a large house known as the Square House where they lived communally. It still stands today. Ireland also took a spiritual wife, one Abigail Lougee. He declared himself the Second Messiah, and although he lived a relatively quiet life people came to visit him from other towns for spiritual guidance.

Just a quick aside: Ireland was not unique in his beliefs at this time. He was just one representative of a larger movement. For example, in Easton members of a church also declared themselves immortal and all took new spouses. In Hopkinton, a man named Nat Smith even declared himself God. Smith wore a hat with a sign reading "I am God" and routinely disrupted the town's Sunday meetings by blowing a ram's horn. He eventually became a follower of Shadrack Ireland.

Ireland lived in the Square House for several decades. Did he really think he was going to live forever? Maybe, but it was not to be. One night in September 1778 his followers noticed that he had somehow changed. Ireland told them that his work was done and God was going to take him. He also instructed them not to bury him, though, since the world would end shortly and he would be resurrected. After telling them this he went up to his bedroom and died.

His followers took his body and put it in the cellar. Some accounts say it was placed in a plain wooden coffin, others that it was placed on a stone slab. All accounts agree that his body remained in the Square House's cellar for a long time. So long that it started to smell. Still unwilling to bury their leader, Ireland's followers covered his body with lime hoping that it would cover the terrible stench. It didn't. Finally someone took his body and buried it in unmarked grave nearby.

Although Shadrack Ireland's body departed his spirit may have lingered. After his death some of his followers remained in the Square House until eventually Mother Ann Lee, the spiritual leader of the Shakers, came to Harvard. Most of Ireland's followers became Shakers and Mother Ann took up residence in the Square House. Although she liked the building she felt that Ireland's spirit remained as an evil influence in it. It was so bothersome to her that she banished it to Hell.

Did his spirit really linger, or was this just Mother Ann Lee's way of finally claiming the Square House (and the people in it) as hers? Either way, it was the end of Shadrack Ireland.


*****
Special thanks to Rhonda for pointing me towards an article that mentioned Shadrack Ireland, and thanks to Dave Goudsward for sending me a copy of it!
3 comments: