Here's the only list worth reading - the top ten New England folkore stories of 2010, based on the number of hits they received on this blog. Enjoy, and thanks for reading in 2010!

1. Nathaniel Hawthorne Sees A Ghost
A famous author goes to the library and encounters the ghost of someone he never spoke to. Soul searching ensues! This post is so popular it makes me wonder if local schools assign Hawthorne's story for English class and kids are searching the Web rather than reading the assignment.

2. Dungeon Rock: Pirates, Treasure and Spirits
Pirates? Yes. Buried treasure? Yes. A cave and spirits? Yes. Convenient location in Lynn, Massachusetts? Yes. A photo of me looking insane? Yes. Even though I posted this way back in 2008, clearly Dungeon Rock still has everything people want to read about.

3. Cannibal Giants of the Snowy Northern Forest
This one is another oldie (from 2009), but we all like reading about monsters, particularly when they could be lurking in your own backyard. Great reading for a blizzardy day like today. Make sure you stock up on supplies first...

4. The Dogtown Werewolf
Another monster, another popular post. Does a werewolf really haunt Dogtown Common on Cape Anne? I can't decide, but the evidence and coincidences are definitely creepy.

5. Why Babies Shouldn't See Mirrors and Vampires Have No Reflection
Readers are either interested in supernatural advice for new mothers or the vampire craze has spilled over to this blog. Either way, folklore about reflections and the soul is interesting stuff.

6. Full Buck Moon
A good post for hunters, Native Americans, Wiccans and animal lovers. I think I covered a lot of diverse constituencies with one post!

7. Negro Election Day
Election Day used to be THE holiday in New England, but African Americans weren't allowed to vote so they were missing all the fun. It was a conundrum, but human ingenuity and the need for a party triumphed!

8. Thomas Morton and the Maypole of Merrymount
Very, very briefly a multi-cultural, tolerant, fun-loving utopian outpost flourished in Quincy, Massachusetts. Maybe someday it will return! This was also another post with a Nathaniel Hawthorne connection.

9. Grandmother Woodchuck
We all need a wise, grandmother to look after us. The Algonquian hero Glookskap's grandmother just happened to be a magical woodchuck. Anyone have a problem with that?

10. Indian Pudding
It's sweet, it's salty, it's spicy and it's made with cornmeal. Could Indian pudding be the perfect food? The thousands who have read this post clearly think so. 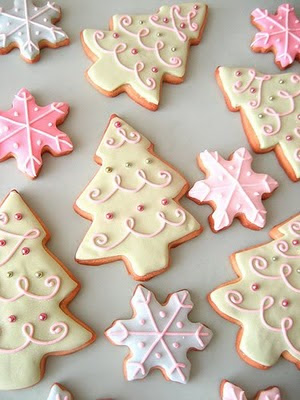 4. If you want these cookies for Christmas, you better start in June since it takes six months for them to soften up! Increasing the amount of butter would probably make these softer right out of the oven, and would also decrease the risk of them getting moldy down in your cellar.
6 comments:

A Little Green Man for Christmas

The place: the woods of Derry, NH, a small town near the Massachusetts border.

A local man was out in the woods, cutting down Christmas trees. He was alone, and as we all know when you're in the woods by yourself things can get spooky. Usually there's no reason to be afraid, but in this case there was.

As the man looked up from a tree he had cut he saw something strange. Really strange.

Standing near him was a little green humanoid. It was about two feet tall, with a big head and large floppy dog-like ears. It had two slits for a nose, and like a reptile it's eyes were covered with protective membranes. It was naked, and had stumpy arms and legs and toeless feet.

The man watched the creature for about twenty minutes, and then tried to capture it. The little green man became terrified and started screeching so loudly and hideously that its would-be captor ran off. I don't know if he took his trees with him, but I kind of doubt it.

Since this encounter took place around Christmas time I'd like to think the creature was an elf, or maybe the Grinch's baby.

We'll never really know what it was, but Derry historian Richard Holmes has traced this story back to its original source, some letters between Derry resident Alfred Horne and UFO researcher Walter Webb. Horne was the man who actually encountered the little green man, and since he wrote to a UFO researcher I guess he thought it was an extraterrestrial of some kind.

This story reminded me of two other stories. First, Derry is the home of Tsieneto, the fairy that allegedly helped Hannah Duston in her escape. I've never read a description of Tsienneto, but maybe she had green skin and snake's eyes.

Second, twenty minutes seems like a long time to watch a scary little humanoid in the woods, but a woman in Winhall, Vermont who encountered another small (but hairy) humanoid said she stared at him for forty minutes. It was almost as if she were in a trance.

The lesson I take away from this story? Buy your tree from a tree farm!

Is Mrs. Claus a Wellesley Graduate?

But she was first mentioned by Katharine Lee Bates, a Massachusetts native and Wellesley professor, in the year 1889.

In her poem Goody Santa Claus on a Sleigh Ride Bates wrote,

Santa, must I tease in vain, Dear? Let me
go and hold the reindeer,
While you clamber down the chimneys.
Don't look savage as a Turk!
Why should you have all the glory of the
joyous Christmas story,
And poor little Goody Santa Claus have
nothing but the work?
Katharine Lee Bates is probably best known for writing America the Beautiful, but introducing Mrs. Claus is also an important accomplishment!

The term "goody" here is not Mrs. Claus's first name (that's unknown) but is short for "goodwife", an old New England term for a married woman. Perhaps Mrs. Claus was a native New Englander who later in life moved to the North Pole?

Katharine Lee Bates herself never legally married, but instead spent twenty-five years in a Boston marriage with Katharine Coman, a Wellesley professor of economics. The relationship only ended when Coman died in 1915.

"Boston marriage" is another interesting term, and was applied to two unmarried women who lived together for a long period of time. Were Bates and Coman lesbians in the modern sense of the word? Like Mrs. Claus's first name, we'll probably never know.

Finally, what about the phrase "savage as a Turk"? If you've ever met anyone from Turkey you'll know they're no more savage than anyone else, so what's up with Bates's Turkophobia?

I think in part it comes from 19th century ethnocentrism - I seriously doubt there were any Turkish students at Wellesley in 1889. The savage Turk image may also come from the old tradition of mummer's plays, which have been performed at Christmas in Britain for centuries and in New England during the 18th century. One of the main characters in these plays is the Turkish Knight, who slays Saint George. Happily, George is brought back to life and everyone (including the Turkish knight) sings, dances and gets drunk. I guess there are no hard feelings!

I got some of this information from Amy Whorf McGuiggan's Christmas in New England. The information about Bates's Boston marriage is from the History Project's Improper Bostonians.