Margaret Jones, the Witch of Charlestown


The 1692 witchcraft trials in Salem are the most famous of their kind in New England, but the unfortunate men and women who died in Salem weren't the first to be executed as witches in Massachusetts. That claim to fame belongs to Margaret Jones.

With her husband Thomas, Margaret was one of the earliest settlers in Charlestown (now part of Boston but at the time a separate town). Margaret was an herbalist and midwife who treated her sick neighbors with various teas and concoctions.

People who have the power to heal also have the power to harm, and eventually some of Margaret's patients began to murmur against her. They claimed she said if they refused to buy her medicines they would never get well. I suppose you can take this two ways. Obviously, if your doctor is prescribing something you should take it if you want your condition to improve. On the other hand, if you believe in witchcraft, you might think your doctor is bewitching you just so she can keep selling you medicine...

Soon her neighbors began to openly accuse Margaret of witchcraft, claiming she

"was found to have such a malignant Touch, as many persons were taken with Deafness, or Vomiting, or other violent Pains or Sickness."


Margaret was arrested and accused of witchcraft. It was widely believed at the time that witches suckled their familiar spirits through strange "witch teats", which could be located anywhere on their body. It was also believed that these spirits needed to feed frequently, and would come to the witch for sustenance even if the witch was imprisoned.

The authorities assigned a guard to watch Margaret while she was in jail to see if her familiar appeared. It did. The guard claimed he saw her suckle a small child in her locked cell. When he opened the cell door to confront her the child disappeared. Clearly, she was a witch.

Margaret was executed by hanging on June 15, 1648. She protested her innocence until the very end, and denounced her accusers and the judges.

"The same Day and Hour she was executed, there was a very great Tempest at Connecticut, which blew down many Trees, etc. "


This was further taken as proof that she had indeed been a witch.

The law at that time required spouses of accused witches to also be arrested. Thomas tried to escape Boston by booking passage on a ship leaving the city, but the ship had trouble keeping its balance even though the weather was calm. When the crew realized that Jones was Margaret's husband they handed him over to the authorities. The ship righted itself after he was removed from the ship. It's not clear what happened to Thomas, but it doesn't seem that he was executed.

As with all the witchcraft trials, it's both interesting and upsetting to see how the belief in witchcraft colored people's perceptions. A sick person who doesn't get better? Must be witchcraft. A storm in Connecticut? Witchcraft. A rocking ship? Witchcraft. It was almost impossible to argue against it.

I got most of this information from Rosemary Ellen Guiley's Encyclopedia of Witches and Witchcraft, and also from Wikipedia.

Stoning as a courtship rite?


Work is insanely busy these days, and my weekends aren't much better, but I don't want to neglect this blog. So to satisfy my need for interesting folklore, here is a demented courtship rite from the Isles of Shoals:

"Very ancient tradition says that the method of courtship at the Isles of Shoals was after this fashion: If a youth fell in love with a maid, he lay in wait till she passed by, and then pelted her with stones... so that if a fair Shoaler found herself the centre of a volley of missiles, she might be sure that an ardent admirer was expressing himself with decision certainly, if not with tact! If she turned, and exhibited any curiosity as the point of the compass whence the bombardment proceeded, her doubts were dispelled by another shower; but if she went on her way in maiden meditation, then was her swain in despair, and life, as is usual in such cases, became a burden to him."


This quaint (if painful) rite is described in Celia Thaxter's 1873 tome Among the Isles of Shoals (and I found it in B.A. Botkin's Treasury of New England Folklore).

I doubt this type of ritual still happens on the Isles, but I've never been so don't blame me if someone pelts you with rocks while you're wearing your new bathing suit. Take it as a compliment!

If you are on one of the Isles that belong to New Hampshire you might even be pelted by someone of the same gender, since gay marriage is allowed there. You might even call it striking a blow for equality! (I know it's a bad joke but I couldn't resist).
1 comment:

Mr. Foxwell and the Vanishing Dancers

Last week I posted a merman story from John Josselyn's 1674 book An Account of Two Voyages to New England.

Josselyn heard that story in Maine on June 26, 1639 when a group of his neighbors came over to welcome him to New England. After Mr. Mittin's story about the merman, another neighbor chimed in with his own strange tale:

The next story was told by Mr. Foxwell, now living in the province of Maine, who having been to the Eastward in a Shallop (a small sailboat) as far as Cape-Ann ... in his return was overtaken by the night, and fearing to land upon the barbarous shore, he put off a little further to Sea.

About midnight they were wakened with a loud voice from the shore, calling upon "Foxwell, Foxwell come a shore," two or three times. Upon the Sands they saw a great fire, and Men and Women hand in hand dancing round about it in a ring, after an hour or two they vanished. And as soon as the day appeared, Foxwell puts into a small Cove ... and traces along the shore, where he found the footing (footprints) of Men, Women and Children shod with shoes ; and an infinite number of brands-ends thrown up by the water, but neither Indian nor English could he meet with on the shore, nor in the woods.

These with many other stories they told me, the credit whereof I will neither impeach nor enforce, but shall satisfy my self, and I hope the Reader hereof, with the saying of a wife: "Learned and honorable Knight, that there are many stranger things in the world, than are to be seen between London and Stanes (a town on the Thames River)."


I read somewhere online that this may be the first ghost story written in the New World. I'm not sure if that's accurate, but I do like it quite a bit. Mr. Foxwell doesn't give any reason for what happened, and for me that obliqueness makes it creepier than you average ghost story. 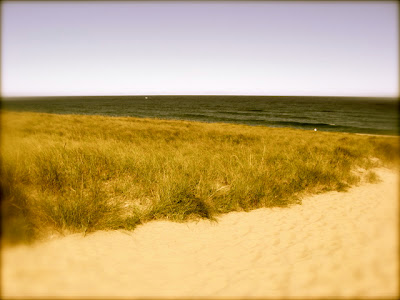 Who were the dancers? If they were solid enough to leave footprints, how could they vanish? How did they know his name? And, the big question, what would have happened if he had joined them around their fire?

Mr Foxwell's tale reminds me of stories that kids still tell at night to spook each other, but it also really imparts to me how the early English settlers must have felt living at the edge of an unknown continent full of unexplained wonders and terrors.
1 comment: