Candlemas and the Groundhog 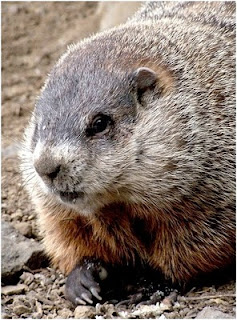 One of my favorite holidays, Groundhog Day, is coming up Tuesday. I'm really drawn to the idea of a marmot that predicts the weather, and it's a nice distraction in the middle of winter.

February 2 is roughly halfway between the winter solstice and the spring equinox, and many holidays have been associated with it. The Catholic and Orthodox churches celebrate February 2 as the day Mary came out of seclusion and brought the infant Jesus to the temple in Jerusalem. It's officially called the Feast of the Purification of the Virgin or the Presentation of Jesus at the Temple, but it's popularly known as Candlemas because candles are brought to church for blessing. In many parts of Europe, Candlemas is considered a good day for determining how long winter will last. In the past, bears played the role on Candlemas in Europe that groundhogs now play in the U.S. (I think a groundhog is probably easier to manage...)

In the ancient Mediterranean Jewish women would remain secluded for 40 days after giving birth, so Candlemas comes 40 days after Christmas. If, as the Puritans pointed out, Christmas is based on several pagan holidays, might Candlemas be based on a pagan holiday as well? The ancient Roman's celebrated Lupercalia in mid-February, but I think it influenced Valentine's Day more than Candlemas. However, in Celtic parts of Europe February 2 was a festival for the goddess Brigid, and later a Catholic saint by the same name. Both the goddess and the saint are associated with fire. Maybe Brigid's fires became Candlemas candles?

Somehow, from this mid-winter mix of pagan and Christian elements, Groundhog Day emerged. It was probably first celebrated by German immigrants in Pennsylvania in the mid-19th century, but by the late 1800s Clifton Johnson recorded beliefs about a weather-predicting groundhog among farmers in western Massachusetts.

While Candlemas loomed larger in their minds than the groundhog, he did record weather lore like this -

If Candlemas be fair and bright,
Winter will take another flight;
If chance to fall a shower of rain,
Winter will not come again.

As far as the sun shines in on Candlemas Day,
So far the snow blows in before May Day.

If it's sunny on Candlemas, winter will stick around. If it's cloudy or rainy, spring will come. This is the same formula Punxsutawney Phil and other prognosticating groundhogs use to predict the duration of winter. (If it's sunny and he sees his shadow, winter is going to stick around.) When you're watching Phil on TV Tuesday morning, realize that he's the heir to a tradition going back thousands of years!

Note: These Candlemas sayings are pretty similar to the Christmas weather sayings I wrote about lat month. Since our cultural ancestors in New England were farmers, I can understand their concern about weather.

The Wild Man of Haverhill, Massachusetts 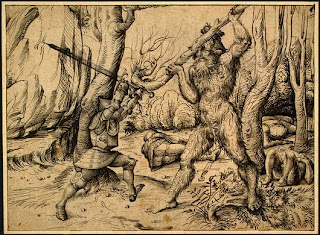 A medieval wild man. A great image, but things didn't get this crazy in Haverhill.
Full disclosure: I grew up in Haverhill, so sometimes I like to write about the folklore of my home town. Here's an interesting little story from George W. Chase's 1861 book The History of Haverhill, Massachusetts.

Back in the summer of 1826, a local Haverhill man named Andrew Frink came down with a fever. Since this was long before the invention of aspirin, his fever grew and Frink became delirious. Eventually, in a fit of madness he ran from his house and disappeared.

Shortly after this, the citizens of Haverhill saw a "wild man" lurking in the nearby woods. (Unfortunately, Chase's book doesn't describe what he looked like.) Thinking he might be Andrew Frink, they formed a search party and set out to find him.

When they caught him, they were surprised to see that it was not Frink, but "literally a wild man from the woods."

"It was supposed from his appearance he was some unfortunate, who, having perhaps met with some disappointment in life, had, in a fit of insanity fled from society."

Chase doesn't say what happened to the wild man, but it seems like was he set free to roam off into the woods again. As for Andrew Frink, his body was found floating in a brook six weeks later, the victim of accidental drowning.

The idea of the wild man living on the fringes of society goes way back to ancient Mesopotamia. Wikipedia notes that medieval Celtic literature features wild men who become that way through insanity, much like the one found in Haverhill. I've seen a few other stories about New England wild men. Some are clearly human, like the famous Leather Man, while others are more cryptic and semi-mythical, like Bigfoot.

It's also interesting that without fever reducers, people would just wander off into the woods and die. If you don't have aspirin, bar the door!

Tomorrow is Martin Luther King Day, and on Tuesday in Massachusetts we have a special election to fill the Senate seat left empty when Ted Kennedy passed away. Here's a post that addresses both black history and elections. I like it when I can be topical!

Before the Civil War, blacks were not allowed to vote. But in Puritan-influenced New England one of the few public holidays was Election Day, which was celebrated with parades, parties and general revelry. This posed a problem for black New Englanders. If they weren't allowed to vote, how were they supposed to celebrate Election Day?

They held their own holiday, called Negro Election Day. (Negro isn't a popular word these days, but it was commonly used in the 18th and 19th centuries). Slaves were given the day off by their owners, and joined with free blacks for parades, athletic contests, dances and dinners. Freemen paid for parts of the celebration, as did slaves, who often earned their own money in their spare time. Strangely, slave owners contributed as well, making sure their slaves were dressed in good clothing. If their slaves looked bad it reflected poorly on them.

Negro Election Days were held throughout New England, in both large cities and smaller towns. The black communities would elect an official, called either a king, sheriff or governor, who rode through town after his election wearing a crown or sash and mounted on a horse. Although he was not legally recognized, this official often served as a liaison between the blacks and whites in his area and ensured that the law was upheld. Sometimes, though, the king was elected simply as a way to mock white leaders and served more as a Lord of Misrule, presiding over the day's festivities.

Negro Election Day was strongly influenced by African traditions, and the it began to wane as the black community lost its connections with Africa over time. By the time of the Civil War the tradition had nearly died out. You can find information about it here, here and here.

If you live in Massachusetts, don't forget to vote on Tuesday!
1 comment:

Why Babies Shouldn't See Mirrors and Vampires Have No Reflection

These are all connected by an old belief that a person's reflection, or even their shadow, is their soul. Given this, here are the reasons for these three:

According to Roger Williams, the local Narragansett had two words for the soul. One of them was michachunck, which was similar to their word for mirror. Maybe the connection between reflections and souls was found in many different cultures? 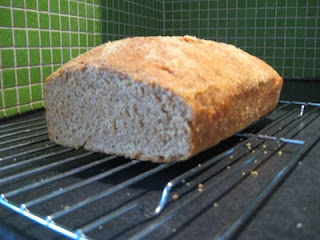 Here's a photo of the Anadama bread I made yesterday, proof that I'm doing and not just blogging. Notice a slice is missing- I couldn't resist.

The bread didn't rise quite as much as it should because I had to substitute rye flour for some of the white flour. Still, it's pretty tasty!

If you have any comments about your own adventures in New England cookery, please let me know!


It's been snowing for 36 hours non-stop. The weather forecast says it might stop by midnight, but right now it's snowing harder than ever!

On a snowy day I like to make bread, and today's loaf of choice is Anadama bread. It's very New England!