Here, from 19th century Massachusetts, are some ways on Thanksgiving to predict what the weather will be in the upcoming winter:

Method #1 - Examine the feathers of your chickens. Do they seem particularly thick? If so, a hard winter is on its way.

Method #2 - Examine the breastbones of your chickens (after you have cooked and eaten them). Do they seem particularly light in color? If so, you can expect a lot of snow. If they are dark, you won't get much snow at all.

Method #3 - Look at the breastbone of your goose (again, after you have cooked and eaten him). Is it particularly dark? Yes? You can expect more rain than snow.

Method #1 seems to be the most "scientific" - the chickens will grow heavier feathers if a cold winter is coming, although this assumes that chickens somehow know a cold winter is coming. (Maybe they can sense what color their breastbones are). Method #2 seems more magical, and relies on similarity in color - white breastbone = white snow. Method #3 also relies on magical color similarity, but can't tell you if heavy snow is coming, only the proportion of rain to snow. I guess this is because of the goose's affinity for water!

I suppose someone could try to test the accuracy of these methods, but most people eat turkey now for Thanksgiving, so there aren't too many goose bones lying around. I'm vegetarian and am having seitan loaf, so I'm completely out of the game.

All of this is from Clifton Johnson's What They Say in New England.


When I posted about Guy Fawkes Day, I mentioned that children in costume would often beg at their neighbors' houses for food on Thanksgiving Day.

George Lunt, in his 1873 book Old New England Traits, also mentions this tradition. He notes that poor people would go door to door, begging for "something for Thanksgiving." Children who weren't poor would often join in as well, dressing up in rags and traveling in gangs around their neighborhood. However, the well-off children did it more as a prank, and would run away after making their request for food.

You can find the entire text of Lunt's book here, but I found this information about Thanksgiving while reading Botkin's Treasury of New England Folklore.


After I posted about the Headless Horseman of Canton, Connecticut a few days ago, I realized I knew about additional headless ghosts haunting New England. Two of them, according to Charles Skinner, can be found in part of North Kingston, Rhode Island known as Swamptown.

Headless Ghost #1 - A traveler making his way through Swamptown one night saw the headless ghost of an African-American boy.

It was a dark night, and the figure was revealed in a blaze of blue light. It swayed to and fro for a time, then rose from the ground with a lurch and shot into space, leaving a trail of illumination behind it.

Yow! That's kind of psychedelic, but there's no indication of who the ghost is or why he has no head.

Headless Ghost #2 - A workman repairing a road in Swamptown unearthed an Algonquin Indian skull, and took it home as a souvenir. Since the women in his house wouldn't let him bring it inside, he stuck it on a pole in the yard. That night, he heard a rattling noise from the backyard. Looking out, he saw a large headless skeleton stalking around the house, waving its arms angrily. Everyone inside the house was terrified, except for the workman, who said calmly "I left your head on the pole at the back door." The skeleton put its head on, and stalked off, shaking its fists at the workman. The skeleton now guards other Indian burials in Swamptown, particularly those at Indian Corner, where there is a rock that bleeds when the moon is full.

It's interesting that neither Swamptown ghost is from the ethnic group that was in the majority when Skinner wrote his book. Again, the Headless Horseman of Canton is French, the Horseman of Sleepy Hollow is German. I'm just not sure what it means. This sounds like a good topic for someone's undergraduate thesis paper!
1 comment:


According to the Old Farmer's Almanac, tomorrow's full moon is the "full beaver moon," so named because this is when the Algonquians and the English would set their final traps in the swamps. It's also known as the full frost moon (for obvious reasons).
1 comment:

The Headless Horseman ... of Canton, Connecticut 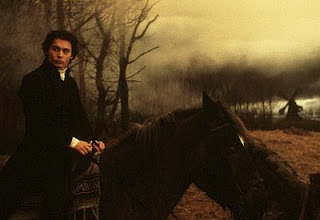 Today I watched Tim Burton's Sleepy Hollow, one of my favorite movies. Lots of blowing leaves, cloudy skies, and old houses - perfect viewing for a November day. Sleepy Hollow also has some nice authentic foklore touches, like the jack-o-lanterns used for decorations in pre-Halloween America (the film is set in 1799), and the books of spells carried by some characters.

But you don't have to travel to Sleepy Hollow, New York to find a headless horseman. Canton, Connecticut has one of its own.

The story, recorded in David Philips Legendary Connecticut, goes something like this. In the autumn of 1777, a French horseman stopped at the Horsford Inn in Canton. While talking with the innkeeper, he mentioned that he was carrying payroll for the French troops helping the Continental army at Saratoga.

The horseman never arrived at Saratoga. No one in Canton saw him leave town, but the innkeeper claimed he had departed early in the morning after staying just one night. The townspeople doubted the innkeeper (who had a bad reputation), but since there was no evidence of foul play the matter was eventually forgotten.

Several years later, when the Horsford Inn burned to the ground, a headless skeleton (assumed to be the French horseman's) was discovered in the ruins. Soon after, a spectral headless horseman was seen in Canton, always riding westward towards Saratoga. Apparently, he's still riding through Canton today, sometimes even causing traffic accidents. Watch out if you're driving through Canton at night!

This is the second story I've posted about colonial Connecticut residents murdering guests (see Micah Rood). Was it a big problem back then? It's also interesting that the ghosts in this story and Washington Irving's Legend of Sleepy Hollow are both non-American (French, and Hessian (German)). Maybe xenophobia makes the ghosts even scarier!

Crow lore from the Narrangansett


It's a gloomy November day - gray skies, humid, and more leaves are on the ground than the trees now. With so many leaves down, though, it's easier to see birds. There were some big noisy crows flapping around the house earlier today.

According to Roger Williams(the founder of Rhode Island whose corpse was apparently absorbed by an apple tree), the the Narragansett Indians would not kill crows, even though they damaged crops:

"These birds, although they doe the corne also some hurt, yet scarce will one Native amongst an hundred kill them because they have a tradition that the Crow brought them at first an Indian Graine of Corne in one Eare, and an Indian or French Beane in another, from the Great God Kautantouwit's field in the Southwest, from whence they hold came all their Corne and Beanes."(A Key Into the Language of the Americas, 1643).

A messenger from the heavenly realm of the creator god Kautantouwit, the crow (or kaukonttuock in the Narragansett language) was responsible for bringing the two staples of Algonquin agriculture into the human world, and therefore was respected and not harmed. According to William Simmons' book Spirit of the New England Tribes, crows were also one of the familiar spirits that aided Algonquin shamans in their work.


Halloween is a relatively new holiday in New England, and wasn't widely celebrated here until the 19th century when immigrants from Ireland and Scotland brought their traditions with them.

However, Guy Fawkes Day (a.k.a Pope Day or Pork Day) was celebrated annually on November 5, until it was eclipsed by Halloween. The two holidays have some interesting similarities. (FYI - Guy Fawkes was a Catholic conspirator who plotted to kill the King and Parliament of England with a hidden keg of gun powder, but was foiled. The holiday celebrates the survival of the King and the Parliament.)

Guy Fawkes Day was celebrated as late as 1893 in Newburyport, MA and Newcastle and Portsmouth, New Hampshire. Men and boys in costume would parade through the streets carrying straw effigies (called either "guys" or "popes") which they would burn on a bonfire. Boys also carried lanterns carved from pumpkins, blew horns, and went begging for money and food from door to door. (B.A. Botkin quotes various sources on this).

The pumpkin lanterns, bonfires, costumes and the begging all became Halloween traditions. The anti-Catholic sentiment of Guy Fawkes Day happily died out, presumably because of the waves of Catholic immigration, but also possibly because the Catholic French were instrumental in helping the American Colonies in their war against England.

Interestingly, Alice Morse Earle in her 1893 book Customs and Fashions in Old New England writes that the begging of "ragged fantastics" (i.e. kids in costumes) on Thanksgiving Day (!) was a holdover from Guy Fawkes Day. Lesley Pratt Bannatyne notes that costumed begging was common in New York City for Thanksgiving as well. I guess it's only recently that trick or treating has been confined to Halloween.
1 comment:

Witches and Doughnuts - A Winning Combination


This little piece of lore screams out "Massachusetts!!!", since it combines doughnuts and witchcraft. It comes from George Lyman Kittredge's Witchcraft in Old and New England.

According to a the February 6, 1919 issue of the Boston Herald, a Cape Cod man was cursed by a local elderly witch after he stole some of her doughnuts. She devised a magic bridle, and rode him in his dreams like a horse until he was exhausted. Kittredge claims he heard a similar story himself from a Truro native in 1888. If the story comes from two separate sources, it must be true!

There's a similar story from Kittery, Maine about a group of witches (and their familiars) who rode a fisherman like a horse after he refused to give one of them a piece of halibut. The bridle was made of horse hair, yew bark, and tow rope, and was found years later inside the walls of an old house that was being torn down. It was burned by the workmen who discovered it. (This story comes from Herbert Sylvester's Maine Pioneer Settlements: Old York, quoted in A Treasury of New England Folklore, edited by B.A. Botkin.)
1 comment: