On the night of April 22, 2020, thieves stole a large statue of Bigfoot from the Brimfield, Massachusetts lawn of Tod Disotell. Disotell, an anthropologist at UMass Amherst, had appeared on the TV show 10 Million Dollar Bigfoot Bounty and liked to decorate his Bigfoot statue with surgical masks and messages about COVID social distancing.
Security camera footage showed two showed two hooded figures cutting a chain before absconding with the statue. Happily, police located the statue a few days later in downtown Worcester. Bigfoot was returned to Disotell's front yard. The thieves were never apprehended.
Sadly, Bigfoot thieves have struck again, this time in Bernardston, Massachusetts. On June 22, they stole an 18-inch concrete statue of Bigfoot from the front lawn of Sarah Gray. The statue, which she named Gerald, was a 2021 Christmas gift from her husband and children.
The Greenfield Reporter has the scoop:

“I was out doing errands and I came back and realized that he was missing from our front yard, off of our stump out here,” Sarah said in her kitchen on Friday. She posted a picture of the statue to Facebook to explain it had disappeared and ask for help finding it. That post got 250 shares and she placed near the stump a large sign asking for the statue’s return, but Gerald remains missing.
“We don’t know what happened. I don’t know if somebody thought he was maybe free,” she said.
Sarah said she did not report the incident to the police because she does not want to burden them with such a matter.
“It was upsetting, but I didn’t want to really involve the police and make a huge deal out of it,” she said. “But for me, it’s very sentimental. I have no hard feelings toward the person that took him or whatever – I would just like my Bigfoot back.”

The Reporter also notes that various friends have shown Gray photos of Bigfoot statues they have seen, but none were Gerald.
If you've stolen Gerald, please return him! Alternately, if Gerald simply ran off on his own, I hope he returns back to Bernardston and the family that loves him.
No comments:

Vampires, Punk Rock and Local Legends in The Pallbearers Club

I don't often review novels here, but Paul Tremblay's new book The Pallbearers Club is based on an important piece of New England folklore. Tony gave it to me, thinking I might like it. He was right! It's creepy and very steeped in weird local history.

The Pallbearer's Club tells the story of Art Barbara, a local rock musician, and his friendship with a mysterious woman named Mercy Brown. Art and Mercy first meet when Art is a high school student in Beverly, Massachusetts. He's tall, skinny, acne-ridden, and has a serious case of scoliosis. He's not the most popular kid in school and doesn't participate in any extracurricular activities. In order to beef up his college applications, he starts the Pallbearers Club, a group that attends funerals of people who don't have anyone to mourn them. Other than Art, only two other Beverly High students are members. 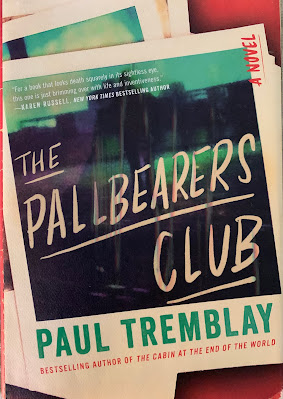 And then Mercy joins. She's older than Art and is a student at Salem State. She introduces him to punk rock and alternative music. She has her own car. She helps him write a paper for a class on local history. The topic: the famous Rhode Island vampire Mercy Brown.

Wait, what? The Pallbearers Club is presented as a memoir by "Art Barbara," but Art admits that this is a pseudonym. It's not his real name. "Mercy Brown" is not really his friend's name either. Art gives her that name in his memoir because... well, because he suspects she's a New England vampire.

I've written about New England vampires before, and they're not like the vampires you see in pop culture. In the 19th century, tuberculosis was rampant across this area. No one knew what caused the disease, which was called 'consumption' at the time because it consumed people's lives and health. It often killed entire families, slowly and one person at a time. Some New Englanders believed the disease was actually caused by a dead family member feeding from the grave on the life force of their loved ones.

Mercy Brown is the best-known of the alleged New England vampires. Beginning in the 1880s, consumption began killing multiple members of the Brown family of Exeter, Rhode Island. The family's mother, Eliza, was the first to die, followed by her daughters Mary and Mercy. When young son Edwin grew ill, neighbors convinced his father George Brown to exhume their corpses to see if any showed signs of life in the grave. Mercy's corpse was undecayed and had blood in its hearts, which according to local folklore indicated she was feeding on Edwin. Her heart and liver were burned to ashes and mixed with water, which was given to young Edwin to drink. This was supposed to prevent Mercy's vampirism and save Edwin's life, but he died two months later. (Michael Bell's book Food for the Dead is the best non-fiction book about New England vampires.)

Is "Mercy Brown" in The Pallbearers Club really a vampire? Art certainly seems to think so and blames her for some unfortunate and unusual events in his life. Mercy vehemently disagrees. The Pallbearers Club is full of notes from Mercy in red pen, offering her perspective on events. Maybe, she suggests, Art is really a drug addict and incapable of moving on from the past. 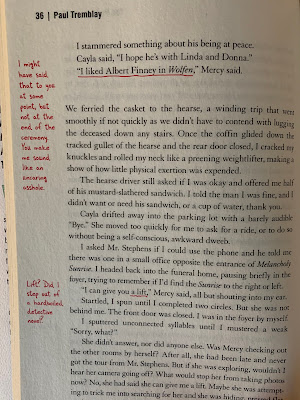 Who is right, Art or Mercy? I won't tell you. The Pallbearers Club is a creepy slow burn and keeps you guessing until the last page (and maybe even after). It doesn't have a lot of gore or violence, so when the weird stuff happens it's all the more effective. There are some nice twists, and I definitely was surprised by the ending. This is also very much a New England novel, set almost entirely in Providence, Rhode Island and Beverly. Tremblay lives north of Boston, and his love and knowledge of the region really shines through. If you like New England, weird folklore, and a twisty plot, add this to your reading list.