A few weeks ago I went to Kansas City, Missouri for work. Wow, was it hot! The temperatures were well over 100 degrees during the day, and at night they were still in the 80s. It was really humid too. It was thick and sticky.

In New England, we've been lucky to escape the worst of the monster heat wave that's torturing the middle of the country. But although most people hate the heat and humidity, it may have a positive side.

Well, at least according to the Old Farmers Almanac. The almanac's writers claim that the warm, damp air so prevalent in July is good for growing corn. The term "cornscateous air" was supposedly used by early almanac writers to describe hot, humid, corn-promoting weather. Cornscateous. Things in Kansas City were really cornscateous. 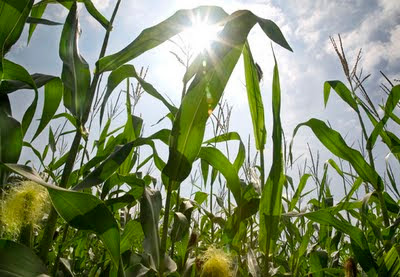 I kind of wonder if the people at the almanac's office in Dublin, NH are just pulling our legs with this word. I've never seen the word "cornscateous" anyplace except in their almanac or someplace that references their almanac. I couldn't find it in any dictionary. And who exactly were these early almanac writers anyway?

Maybe I'm being too skeptical. Perhaps if I were a farmer, or liked miserable humid weather, I'd be more familiar with the word. However, I did buy some local corn at the farmers' market, and it was great. Whether I like it or not, I guess we're getting just the right amount of conscateous air in Massachusetts.
1 comment: 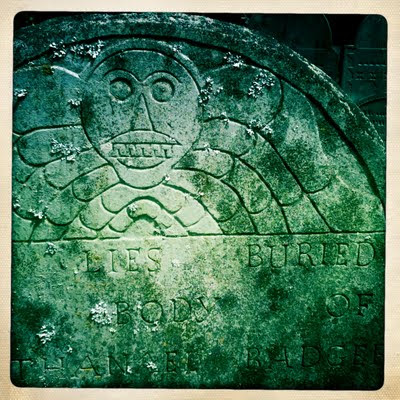 The belief about birds apparently even affected how the Mainers decorated their houses. According to Beck's book, wallpaper with birds on it brings bad luck. Just play it safe and use paint, I say!
1 comment:

The Horned Boy of Bangor 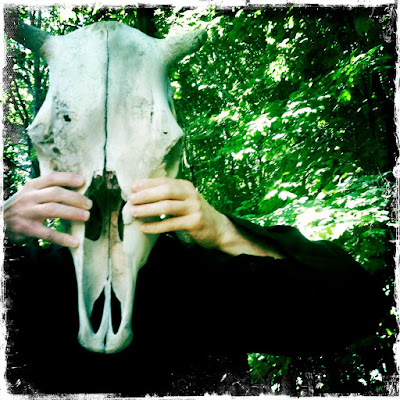 After last week's post about Pamola I got a hankering for more Maine folklore. Here's a great story from Horace Beck's 1957 book The Folklore of Maine.

Many years ago near Bangor a family had two sons. The older boy was always mischievous and getting into trouble. He was so poorly behaved that his neighbors said he had the Devil in him. The younger boy, however, was quiet and well-behaved.

One day the older boy found out his younger brother would be walking home after dark. "Aha!" he thought. "The perfect occasion for a prank."

He covered his body with a cow skin, put a cow skull on his head, and hid in the bushes near the road. When his little brother walked by, he jumped from his hiding place, howling and waving his arms. He expected his brother to run all the way home!

The surprise was on him. His younger brother picked up a large branch and hit the horned monster soundly on the head. Then he ran home.

When he told his parents what happened they ran down the road. Their worst fears were confirmed - their oldest son was dead, killed with a single blow.

His parents pulled off the cow skin, but no matter how hard they tried they were unable to remove the horns from his head. They asked neigbhors and friends to help, but to no avail. The horns wouldn't budge. It was if they were fused to his head.

A few days later the boy was buried with the horns still attached. At the funeral all the neighbors whispered, "We always knew he had the Devil in him."
3 comments:

I've never climbed Mt. Katahdin, which is in Maine's Baxter State Park. It's the tallest mountain in the state, and the endpoint of the Appalachian Trail. Not surprisingly, there's a lot of folklore attached to this big mountain.

One of the most interesting stories is about a creature named Pamola. I don't know if any recent hikers or climbers have encountered him, but I'm sure they'd remember if they did.

According to the Penobscot Indians, Pamola was a wandering spirit, and Mt. Katahdin was one of his favorite hangouts. 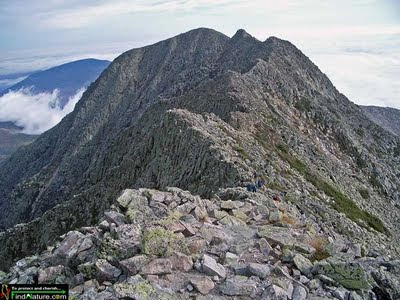 Katahdin photo from here.
According to Frank Speck's 1935 article Penobscot Tales and Religious Beliefs, Pamola has no body, but is just a large head with arms and legs. (He sounds strangely like one of those animated M&Ms who show up in the commercials.) He has no settled home, but roams around from place to place wearing a backpack, which is very appropriate given Katahdin's location on the Appalachian Trail.

Other informants told Speck they had seen Pamola flying overhead, and that he was just a giant head with wings. See what I mean about him being memorable?

Despite his unusual appearance, Pamola was considered a beneficial spirit and would sometimes give aid to humans. However, if you needed his help you'd have to time it just right.

Once a year Pamola traveled across the entire sky. Beginning at the eastern horizon he'd let out a big shout, give another one at the sky's zenith directly overhead, and then one final one when he reached the western horizon. To gain his aid, the Penobscots would burn grease when they heard his first cry. If Pamola saw the smoke as he traveled overhead he would descend and listen to the Penobscot's request for help.

Unfortunately, Speck's article doesn't say what time of year Pamola made his journey. And please note, although I am writing about Pamola in the past tense he could still be hanging around Mt. Katahdin or flying across the sky. I don't want to offend a spirit by implying it's no longer active.

Pamola is still known in parts of Maine, and is the mascot of the Pamola Lodge of the Boy Scouts of America. Or maybe he adopted the Lodge as his mascots, I'm not quite sure. These scouts portray Pamola as a man with a the head of a moose and the wings and feet of an eagle. I guess the giant flying head was probably too terrifying!