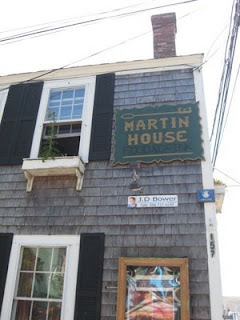 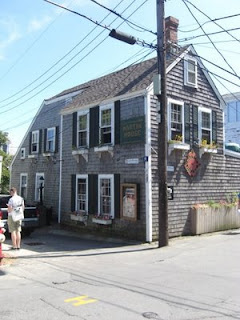 Paranormal investigators don't think the ghosts are malicious, but simply curious. Unfortunately, the Martin House seems to be haunted by something worse than ghosts these days - a bad economy. It hasn't been open for business in a couple years, and is up for sale. If you have the money, you might be able to get a good deal on a famous building filled with spirits.
3 comments:

No pirate corpses were visible the day I sailed past Nix's Mate.

Last week a friend and I took the ferry from Boston to Provincetown. One of the sights we saw as we cruised through Boston Harbor was Nix's Mate, a very small island topped by stone pyramid. It may be only be 200 square feet, but it has more folklore per foot than any other island in the harbor.

WHERE DID ALL THE LAND GO? Nix's Mate was originally a 12 acre island where sheep grazed. Now, it's just a tiny rocky shoal that's entirely hidden during high tide. What happened? According to Skinner's Myths and Legends of Our Own Land, in the 1630s a certain Captain Nix was murdered in a ship anchored off the island. His first mate was convicted of the crime, and sentenced to death by hanging on the island. As he was led to the gallows, he shouted "God, show that I am innocent. Let this island sink and prove to these people that I have never stained my hands with human blood." After the sailor was executed, the island slowly began to sink into the sea, proving his innocence. (A more boring explanation is that the land was quarried for gravel.)

WHAT'S IN A NAME? There are a few explanations of where Nix's Mate got it's catchy name, which it's had since 1636. The first is that was named after Captain Nix's who was hanged there. However, there are no records of Captain Nix or a sailor being executed on the island in the 1630s. This leads to the second explanation - that Nix's Mate is really a garbled version of nixie scmalt, which is Old Dutch for "wail of the water spirits." Allegedly, a Dutch passenger on a boat muttered this as he heard the waves pounding against the island's cliffs. (You can read more about the water spirits known as nixen here.)
PIRATES! Although there is no record of Nix's mate being executeded on the island, three actual pirates are known to have been hanged there, with their bodies left in the gibbet as a warning to other would-be pirates. The most famous of the three was William Fly, who was executed in July of 1726. Fly refused to repent during his trial, and wanted to die as bravely as he lived. According to Robert Cahill's New England's Cruel and Unusual Punishments, Fly walked to the gallows carrying a flower, and smiled at the executioner as the noose was put around his neck. Other sources claim that Fly even helped tie the noose around his own neck. The corpses of Fly and the other pirates were buried on Nix's Mate, and are now probably at the bottom of Boston Harbor.
2 comments: 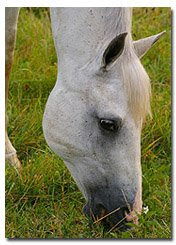 Feeling lucky?
My last post I noted Ethan Allen wanted to reincarnate as a white stallion (and may have done so). It's no accident he selected a white horse for his next body, because they loom large in the folklore of New England.

Here are some examples of lore about white horses:
Clearly, these all made a lot more sense when New England was rural, agricultural, and horses were the transportation of choice. I think it would take me a lifetime to see three white horses go by in my neighborhood today.

In honor of July 4th, here's some interesting information about Ethan Allen, Revolutionary War hero and leader of the famed Green Mountain Boys, the Vermont militia that captured Fort Ticonderoga from the British without using force.

Ethan Allen was a bit of a loose cannon and a freethinker. He was also a Deist, and wrote a book called Reason, the Only Oracle of Man, that outlined his unorthodox religious views. It was an attack on Christianity, the Bible and the clergy. Unsurprisingly, it got bad reviews.

In 1785, which was late in his life, Ethan Allen discussed metaphysics with J. Hector St. John de Crevecoeur, a Frenchman who became an American citizen and wrote a series of popular books titled Letters from An American Farmer. Ethan Allen remarked that if the transmigration of souls was indeed true, he hoped to return to earth as a magnificent white stallion so he could roam the hills of Vermont.

Allen died in 1789. Although the public viewed him as a national hero, clergymen took a dimmer view, one going so far to call him "one of the wickedest men that ever walked this guilty globe."

According to B.A. Botkin's Treasury of New England Folklore, shortly after Allen's death a large white stallion, unclaimed by any farmer, was seen roaming freely across the green hills of Vermont. Ethan Allen's remains have never been located by modern historians.
7 comments: