As I watched the enormous number of mourners at Queen Elizabeth's recent funeral, I found myself wondering how many people will attend mine. I hoped that I would get a big turnout.
It's kind of a morbid thought but I think it's a common one. And as I had this thought, I was reminded of a weird and grim little tale about a man named Rufus Goodrich. It appears in Catharine Melinda North's 1916 book History of Berlin Connecticut and it will make you think twice about wishing for a big funeral.
*****
Many years ago, people used to gather at the cider mill in Berlin, Connecticut to enjoy hard cider and good gossip. One day a man named Rufus Goodrich, who lived in nearby Rocky Hill, came into the mill and ordered some cider. He had a big smile on his face and seemed almost giddy with excitement.
Someone said, "Why so happy Rufus?"
Rufus took a sip from his cider and explained he had just sold his soul to the Devil. Everyone in the cider mill fell silent.
Rufus went on to say that the Devil promised him he would be famous if he just signed away his soul. Rufus had asked the Devil exactly how famous he would be.
The Devil replied, "Well, let's just say there will be thousands at your funeral. Thousands." This sounded pretty good to Rufus, so he sold his soul to the Devil.
Once he finished telling his story, Rufus slammed down his now-empty cider mug and stood up. "See you folks later. I'm off to become famous," he said and strutted out the door.
No one saw Rufus around Berlin or Rocky Hill for a few days after that. People thought maybe he had gone to Boston or New York to become famous. But they soon learned the terrible truth when a local farmer complained that huge swarms of flies kept buzzing in and out of his barn. And a horrible smell was coming from the back of the barn too...
A group of local men gathered their courage and made their way to the back of the barn. They had to cover their noses and mouths to keep out the flies and the stench. When they reached the back of the barn they found the body of Rufus Goodrich. It was covered with flies.
The men thought of the Devil's promise when they saw Rufus's corpse. There were thousands of flies crawling on him. Thousands.
*****
I love these gruesome little New England folk stories. A lot of them are quite grim, but this is one of the grimmest. I haven't seen it anywhere except in North's book, and I wonder where she heard the story. I haven't been able to locate any records of a "Rufus Goodrich" but the Goodriches were a well-known Rocky Hill family, so perhaps it is based on an actual person. It might be quite old too. Earl Chapin May, in his book Century of Silver, 1847 - 1947, claims the story dates back to the 18th century.
To sum up: be careful what you wish for.
No comments:

Ghosts and Graffiti at Fort Revere

Over Labor Day weekend Tony and I drove down to Hull, Massachusetts. Hull is of course a popular destination in the summer because of Nantasket Beach, but we had a different destination in mind. We wanted to visit a haunted fort. 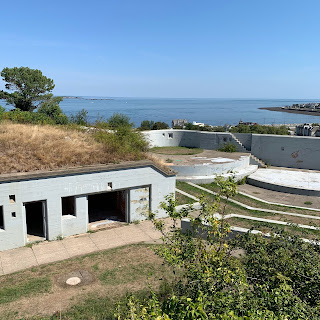 Fort Revere sits on top of Telegraph Hill, a promontory that looks out over the town and Boston Harbor. The views are amazing, and I can understand why someone would build a fort there. You definitely would be able to see any ships approaching Hull, as well as a view of the one road leading into town.

Hull was first colonized by the English in 1622, and they considered fortifying the hill as early as 1633. It wasn't until the American Revolution, though, that anyone actually built anything there. In 1775, General Joseph Palmer constructed the first fort and named it Fort Independence. After the war that name was given to the fort on Castle Island in Boston, and the Hull fort was demolished and buried. 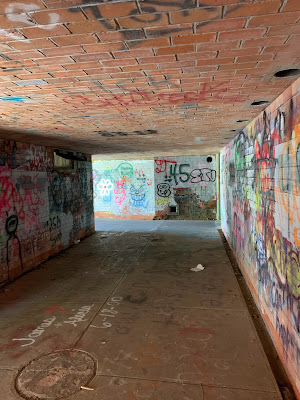 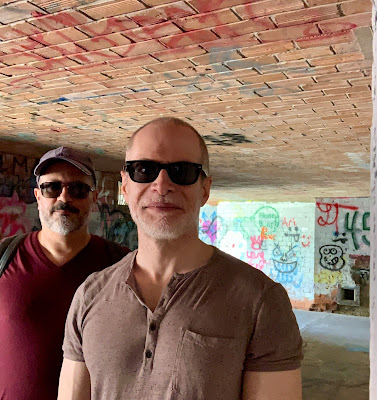 The current fort on Telegraph Hill was constructed from 1898 - 1906. Named Fort Revere, it housed troops during the Spanish-American war and was armed with multiple cannons. In 1948 the US Government finally decommissioned the fort and gave it to the Commonwealth of Massachusetts. It is now a public park.

Where are the ghosts in all this history? Well, according to local legends, the fort is haunted by the spirits of 200 French soldiers who died of smallpox in 1778. The soldiers had been captured by the British while fighting in Nova Scotia, but had been freed in a prisoner exchange. They were sent to the fort in Hull, where French marines were garrisoned. Unfortunately, most of the freed prisoners died from smallpox. Their countrymen buried them somewhere on the hill's slopes. Local archaeologists tried to find their grave in 1976 but were unable to locate it. 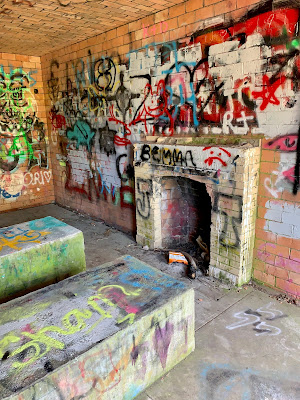 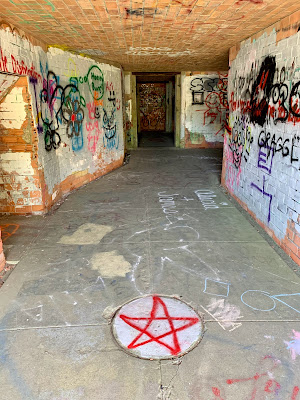 The smallpox victims were real, but are the ghosts? Tony and I didn't encounter anything odd, but we went during the daytime and didn't try to engage with any restless spirits. I'm not that brave! Maybe if we had we would have experienced some of the strange phenomena said to occur. People say unseen entities will throw a rock back to you if you throw it down one of Fort Revere's many dark tunnels. They also say shadowy shapes can be seen flitting by doorways and whispers are heard in empty rooms.

As my friend Sam Baltrusis notes in his book Haunted Boston Harbor, paranormal investigators have recorded strange EVPs (electronic voice phenomena) in the fort. Anne Kerrigan and Michael Markowicz, of the group East Bridgewater's Most Haunted, investigated the site in 2007. Markowicz recored an EVP that sounded like a choir singing, which is pretty freaky. They also captured voices saying, "What do you want with us, Michael?" and "Watch us, watch you." That's even freakier. 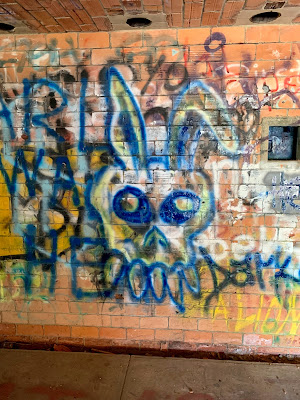 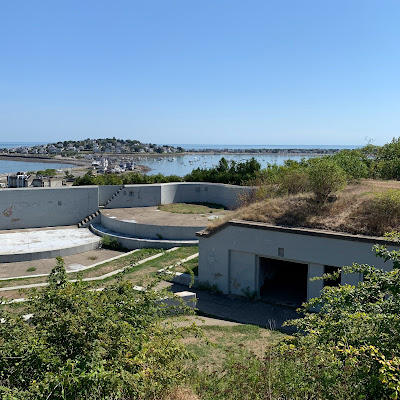 Happily, they didn't encounter any malevolent energy at the fort. Tony and I didn't either, although we did encounter a lot of graffiti. A lot!  Some of it is over 20 years old, so I don't think anyone has been cleaning the inside of the fort. The outside is almost spotless though (and has amazing views).

We had a good time exploring the fort. If you want to visit someplace historic, scenic, and possibly haunted, I'd recommend Fort Revere.