Conjuring by Sieve and Scissors

On September 8, 1692, Rebecca Johnson testified before the magistrates at Salem court. Like so many others, this Andover widow had been accused of witchcraft.

Rebecca Johnson pleaded innocent to the crime of witchcraft, but she did confess that in the winter of 1691 her daughter-in-law had used magic. She had conjured using a sieve and scissors.

One of her daughter-in-law's relatives, a man named Moses Hagget, had been kidnapped during an Indian raid. She wanted to know if he was alive or dead. With the help of two family members, the daughter-in-law balanced a sieve upon a pair of scissors and repeated the following spell:

By Saint Peter and Saint Paul
If Hagget be dead
Let this sieve turn around.


The sieve rotated, confirming her suspicion that Moses Hagget was dead.

Telling the future with a sieve and scissors was a common practice in Puritan New England, but like all magic it was frowned upon by the clergy. Cotton Mather wrote:

The children of New England have secretly done many things that are pleasing to the Devil. They say, that in some towns, it has been an usual thing for people to cure hurts with spells, or to use detestable conjurations, with sieves, and keys, and peas, and nails, and horseshoes, and I know not what other implements to learn the things for which they have a forbidden and impious curiosity.


This form of divination didn't originate in New England. Fortune-telling with a sieve and scissors has been practiced in the Western world for thousands of years, and is recorded by ancient Greek writers. The official name for the practice is coscinomancy, from the Greek word for sieve, koskinon. Feel free to use the term coscinomancy at a cocktail party to sound smart!

Although it has been around for millennia, there's currently some uncertainty about exactly how it should be done. (If anyone actually practices this please let me know how you do it!) Most instructions claim at least two people are needed to perform coscinomancy properly. For example, here is an old illustration floating around the Web that shows two people very gently holding the scissors. 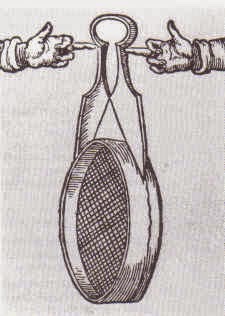 That's a cool picture, but I'm not really sure how the sieve would rotate. Other writers say the sieve should be tied with string to the scissors or shears. The famous occultists Cornelius Agrippa (1486 - 1535) vouches for the string method, and also claims the following words (incomprehensible to humans) must be chanted: Dies, mies, jeschet, benedoefet, dowima, enitemaus. Agrippa thought this incantation compelled a demon to move the sieve.

You'll notice that in Andover the spell invoked Catholic saints instead of demons. The Puritan clergy was opposed to the idea of saints, but apparently they still lingered in folk religion and magic. Saints were often invoked in English and European magic, and Peter and Paul have been associated with coscinomancy for many years.

For example, in 1554 a London cleric named William Hassylwoode was brought to court on the charge that he used "witchcraft, or sorcery, with a sieve and pair of shears." Hassylwoode confessed that he had learned from his mother to invoke Saints Peter and Paul while trying to find lost items. This is just one of multiple cases from 16th century London where people were accused of using coscinomancy to discover thieves or find missing items.

To find a thief, the following spell was recited:

By St. Peter and St. Paul,
If (name of suspected thief) hath stolen (legitimate owner's name)'s (missing item)
Turn about riddle and shears and all.


Although this form of fortune-telling has a pre-Christian origin, it was believed in Renaissance England that Peter and Paul had invented the practice. Peter and Paul were also associated with using the Bible and a key for telling the future. As historian George Kittredge writes, "Almost the same formula has been utilized for the Bible and Key, where indeed, the saints' names seem more appropriate than in coscinomancy."


*****
My sources for this week's post were George Lyman Kittredge's Witchcraft in Old and New England (1929) and Marilynne Roach's The Salem Witch Trials. A Day-By-Day Chronicle of A Community Under Siege (2002).

The scissors and sieve method could obviously never work in the way Agrippa illustrated (this isn't surprising as his book was full of intentional misrepresentations designed to guard the secrets of his sources). The real method is to insert the tips of the scissors through the center of the sieve, from above, and have the subject(s)stand holding the scissors upside down while the sieve is observed for movement.

Hi Sean! Thanks for the comment. I suppose that makes sense. The sieve could rotate around the scissors point until it fell off. Have you tired this yourself? It seems like modern sieves have mesh that is too fine.

Peter, no I haven't (I'm more of an I Ching/Tarot user). I found this method by googling but it wasn't one of the first results & I can't seem to find it again. I'm wondering now if the method would instead be to hold the scissors below, poke the tips through and balance the sieve above. That way it would rotate on top of the scissor points... seems to make more sense physics-wise than the way I initially described (and may have misread from the elusive source).

Peter
I have lived in Louisiana my whole life, much of it in Baton Rouge very near New Orleans. I have also traveled a great deal on my life. I have visited New England several times and on more than a couple of those trips I have visited Salem while there. I find the use of the term "psychic landscape" out of place in this situation for both New Orleans and New England. While New England has a harsh changing climate and New Orleans a warm tropical one and both may conjure up ideal landscapes for the ideas of witchcraft on the one hand and voodoo on the other, I believe that conjuring has less to do with the lands and more to do with those who have inhabited them and the descendants that still pass on the traditions. New England was ripe for Witch hysteria, not because it was New England geographically, but because it was puritan settled. Has the Puritans settled elsewhere they would have still had Indian issue, still had a new unsettled world to deal with, and still would have seen the "devil" at work in their in their misery. Places like New Orleans and New England only give a creepy psychic vibe because of the stories we attribute to them. I would submit to you that if a Ult. thing psychic at all is taking place it is simply man's ability to project on his environment, the wonder of the human mind that can consume and imagine and create further with each generation, and man's tendency to identify a city or even its architecture with superstition. Be the House of 7 Gables or an elevated cabin in the middle of a swamp, wherever one sees these they will think of Witchcraft (house of 7 gables) and voodoo (swamp). Salem is setting one sees when thinking of witchcraft and New Orleans or Haitia is the setting one sees when thinking of voodoo. But this is a product of our mind and when we see places that remind us of either, we quickly identify those places as creepy and sometimes do not even make the connection back to why we think them as such (the similarity the place bares to another place we associate with as creepy for whatever reason it may be).

Sorry for the typos. iPhone keyboards still give me trouble.

Thanks for sharing this beautiful piece of information.shears scissors are popular with hair pros due to their quality and durability. In order to assist all of their clients, a salon needs to have a variety of professional hairdressing scissors, on hand for their easy to use.
http://kamisorishears.com