Lumberjacks and the Devil: Two Stories from Maine

Many years ago a lumberjack named Robert Cartier lived and worked in Millinocket, Maine. I suppose "worked" is an exaggeration. Cartier was a lazy drunkard and a trouble-maker. He preferred drinking in the bars or starting fights over cutting down trees.

One day the Devil appeared to Cartier. The Devil said, "Robert, I'd like to make a deal with you. It's a shame you need to spend so much time working as a lumberjack. You're doing an excellent job spreading evil by drinking and picking fights. I'd rather you spent your time doing that. What do you think?"

"Well," said the Devil, "Here's the deal. I'll give you a magic axe. It can cut down trees all by itself. You won't need to lift a finger. You just need to whistle to make it happen. In return, I get your should when you die."

Cartier wasn't very smart, so a few years of easy living in exchange for eternal damnation sounded like a bargain to him. He agreed to the Devil's deal. 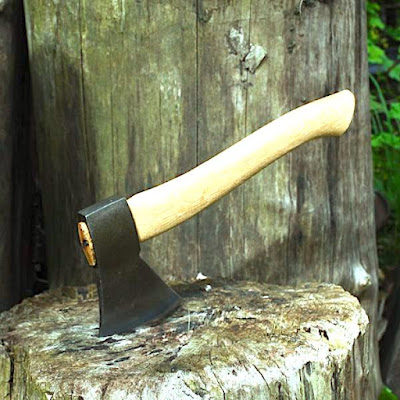 The next day Cartier went into the woods with the Devil's axe. He sat in the shade eating, drinking whisky, and whistling while the axe cut down tree after tree. When he was done in he went into town to drink more and pick fights. He had plenty of energy for mischief because he had done so little all day.

For many years Cartier spread misery at night while the Devil's axe chopped down trees all day. But one night in a bar Cartier had a moment of drunken clarity: he had spent his life doing evil and was doomed to Hell. Cartier staggered out of the bar into the night, eager to find atonement.

The next morning some lumberjacks found Cartier's body in the woods. His head been chopped clean off with one blow of an axe. The murder weapon was never found, but some people say the Devil's magic axe is still out there, ready for some unwary soul to start whistling in the woods.

People in Dyer Brook, Maine say there is a special place in the woods where you can meet the Devil. If you go there seven nights in a row the Devil will appear and speak to you.

A logger named Jack learned about this place and went there for the required number of nights. On the seventh night the Devil came and talked with Jack. He warned him not to ride the logs in the river next day or he would die. Jack was foolhardy and laughed at the Devil's warning.

The next day Jack went went to work. A huge number of logs were being driven down the river. Jack jumped from log to log, nudging them with his pole to keep them moving downstream. He was about to leap onto another log when suddenly a flaming pickaxe appeared in front of him. He remembered the Devil's warning and jumped back to shore. Several men died that day in a logjam, but Jack didn't.

After this the other lumberjacks began to notice strange things about Jack. For example, when he was out chopping wood the sound of two axes could be heard, even though he was at the only person visible. Jack also was often heard talking to someone that no one else could see. Maybe it was just an imaginary friend, but people knew that Jack had gone to the Devil's meeting place. They stared to call him Jack-the-Ripper because his strange behavior scared them.

Once Jack drove his axe into a tree so hard the handle split in two. But when Jack pulled it out the handle was strangely once again whole. The lumberjacks who witnessed this avoided him like the plague.

One day the boss walked with Jack to a clearing in the woods. It was full of brush and logs. "Clean this mess up," the boss said and walked off. The boss was spooked by Jack and thought it would take him several days to clean the clearing. Jack came back to camp in just a few hours. All the brush and logs had been neatly stacked in a pile. It would have taken dozens of men to do what Jack did alone in just a short time. The other men at camp whispered that he had supernatural help.

After that all the lumberjacks refused to work with Jack-the-Ripper. He left Dyer Brook and was never seen again.

I really like these two stories. They're short, sweet and spooky. The first one comes from Charles A. Stansfield's Haunted Maine (2007), which is packed with great legends. The other one comes from The WPA Guide to Maine: The Pine Tree State, which was produced in the 1930s by the Federal Writers' Project as a way to employ out-of-work authors. Why doesn't the US government pay people to collect folklore today? That's how I want my tax dollars spent.