I always imagine that Labor Day weekend will be warm and sunny. You know, it's the end of summer so we should spend one last day at the beach or have a big picnic. That's not always the case, however. The Sunday of this past Labor Day weekend was cold and rainy. It felt more like November than September.

Tony and I went down to Milton, Massachusetts for a little day-trip in the raw weather. Our main goal was to visit the Eustis Estate, a huge 19th century house that was recently opened to the public by Historic New England. It's a really beautiful building with some amazing architectural details, and they've restored the interiors with period fabrics and wall treatments. 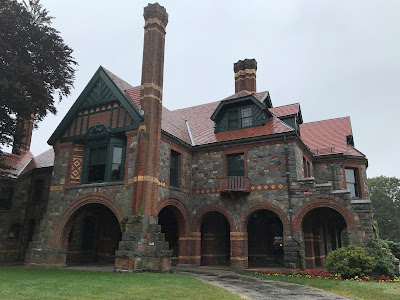 Since it was a gloomy day and the house was relatively empty I kept thinking of Shirley Jackson's novel The Haunting of Hill House. I don't mean that in a bad way either. The building has a lot of presence and would make a great setting for a movie. On a sunny day you might film something by Edith Wharton, but on a gloomy day it was definitely the setting for a horror movie.

I didn't find any ghost stories associated with the Eustis Estate, but there is a haunted location in Milton just a few miles away. Although it just looks like a pleasant country road, Harland Street in Milton is supposed to be home to several ghosts. In fact, the locals call it Ghost Road. Perhaps I should write it this way: GHOST ROAD. That looks more frightening. And there are definitely some frightening stories attached to it.

The stretch of Harland Street between Hillside Street and Unquity Road has been said to be haunted for decades. According to Robert Ellis Cahill's book New England's Ghostly Haunts (1982), people living there complained so often of strange noises and ghostly apparitions that they finally brought in a group of psychic investigators.

Two of the investigators, Elaine Favioli and Edward Ambermon, saw "jellyfish-like blobs with discernible ears and mouths," while other spirits appeared in human form. One was a woman in a long gown, and the other was an American Indian the investigators named Mingo. A Ponkapoag Indian named Mingo did live in Milton, but I'm not sure if this is really his ghost or if the investigators just used his name. As Cahill notes, an Indian ghost named Mingo also haunted the Barnstable House on Cape Cod. Are they the same ghost or just two unfortunate souls with the same name?

Those jellyfish-like blobs sound pretty creepy, and Ghost Road keeps it's creepy reputation even today. Several people on message boards claim the road is haunted by a family that walks up and down the road at night, and that the family is made up of an Indian ghost named Mingo, a headless Puritan woman, and her child.

Other people say they've encountered a man walking up and down Ghost Road late at night. No one knows who he is, and he refuses to show his face. A black car has also been spotted parked by the side of the road. It flashes its lights at everyone who drives past. Are the two related somehow? All of these ghosts (plus horrifying unearthly shrieks) are only manifest during the night. Happily Tony and I went during the day.

Ghost Road passes through swampy conservation land and Tony wondered why people often report paranormal activity near swamps, like this one or the Hockomock Swamp in the Bridgewater Triangle. It's a good question. I suppose one could argue people are misinterpreting natural phenomena as ghostly activity. Swamps are dark and full of wildlife, so maybe people hear frogs or foxes and think they are hearing human voices. Luminous swamp gas might be interpreted as glowing ghosts. 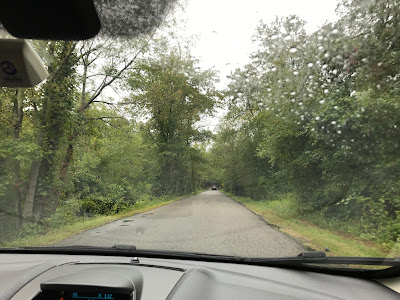 Still, that wouldn't explain things like a family of ghosts walking in the night or a black car parked by the side of the road. Swamps tend to be undeveloped (and therefore very dark at night) so perhaps they serve as blank slates onto which we can project our fears, be they restless Indians whose land we stole or faceless men who lurk in our neighborhoods.

Finally, I'll just point out that local American Indian tribes viewed swamps as gateways to the underworld. They felt they were good places to contact spirits and their shamans would visit swamps to find spirit allies or seek visions. They were not evil places but places of power. Maybe people today are seeing the spirits that have always been there but just filtered through a modern American worldview.

Legend has if you tap on the parked car that appears you will be haunted by the man for years on end. I have been down tat rd many times and it is crepy around the 19 centery that used to be some time of mill factory and there was a fire and it all burned down since then it has regrown to the woods its know today. IF you walk into the brush suronding the road you can still hear the screams of the workers calling for help. Know if you want to you can but i will not . Lest ask are selfs why we want this and why not . IS this the right way ? or the wrong way? What will I get out of this ?

the ghost of the car

Lived there from birth until the age of 16. Address 460. Believe it or not it was at that time last house on the left. The lady in the blue dress came to me and I passed through her. No lie and it was in the house. I will never forget it she was a kind person, I could just feel it. Many a visitor to our house saw things unusual people in our driveway. I would get my gun and investigate. But no one was ever there. Don't freak out it was 40 years ago in the woods we had guns. The glowing globes my brother said he had seen. So yeah also golf course built on Indian Land. I know that is a strange but beautiful place.