A Weed That Cures Witchcraft and Elf-Sickness

Today is cloudy and dark. A hurricane is churning off the coast. Autumn officially starts in a few days. All this puts me in the mood for some witchcraft. So here goes!

Whenever I walk around the Boston area, I see a lot of plants growing wild. They grow in yards, they grow in parks, they grow in empty lots and along the sidewalks. I suppose you might call them weeds, but that term seems a little derogatory, doesn't it? Many of these plants are actually herbs that historically have been associated with healing. We've just forgotten what they were used for.

Some of them I recognize, like mugwort, dandelion, and mullein, but I'm still learning the names of others. For example, I believe this inconspicuous looking plant growing on Memorial Drive is actually dock weed (or dock). I'm glad to know where it is. It might come in handy in case I am bewitched or afflicted by elves. 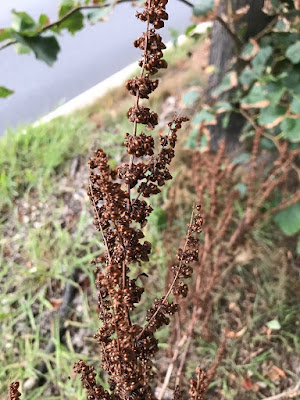 According to Pamela Jones's book Just Weeds: History, Myths and Uses (1994), the Medieval Anglo-Saxons valued dock weed as a cure for "elf-sickness." Like many other Europeans, the Anglo-Saxons believed that elves shot people with invisible arrows and made them sick. Many Anglo-Saxon sources also link elves with witches since they were both sources of illness and suffering.

For example, one Anglo-Saxon book of cures contains a recipe for an herbal salve to treat sickness caused by "the elfin race and nocturnal goblin visitors and for the women with whom the devil hath carnal commerce." Another such book has a chapter dedicated to cures against "every evil wisewoman and the elfin race," while another, the Lacnunga, lists witches, elves, and Norse gods as possible causes for illness.

The Puritans who colonized New England did not worry about Norse gods, and they didn't really worry much about elves either. But they worried about witches a lot. A lot. The Salem witch trials of 1692 are the most famous New England trials, but there were many others before them, and even a few afterwards. For the Puritan settlers, witches were a real concern and they were always looking for ways to combat their malevolent magic.

For example, in 1685 a woman living in East Hampton, Connecticut* named Elizabeth Howell became strangely ill. She felt sharp piercing pains as if being stuck with pins, and claimed to see a strange black creature lurking at the foot of her bed. She also supposedly vomited up a pin. Before she died, Howell cried out that she was being bewitched by a neighbor, Elizabeth Garlick.

Goody Garlick was arrested and brought to trial for witchcraft. Several people testified against her, including one Goodwife Simons, who claimed that while suffering from fits two neighbors arrived with dock weed to cure her illness. When she learned that the dock weed had been provided by Goody Garlick she threw it onto the fire. She suspected that Goody Garlick was bewitching her and didn't trust the dock weed. Perhaps it would just make her feel worse! But it's clear that her neighbors thought the dock weed would help cure her. I think it's fascinating that a centuries-old belief dating back to the Anglo-Saxons appeared in 17th century Connecticut.

So there you go. Random weeds growing near the sidewalk actually have a connection to witchcraft, and perhaps even elves. New England is a great place to live!

* East Hampton is now part of New York but for a time in the 1600s it was part of Connecticut.

I got most of my information about Goody Garlick and the dock weed from this Smithsonian article and this article in the East Hampton Star. I also found another Anglo-Saxon leech book that mentions burning herbs as a cure for elf-sickness, but historians don't seem to think that is why Goodwife Simons threw the dock weed into her fire.

Brings back good memories from 40 years back! When I was studying Old English, the professor started with short texts that included the charms, such as "With Faersticce" (against sudden side-stitch), wherein the arrows shot by the elves were to be charmed-out in powerful alliterative verses. It was a great introduction to the language, culture, and European folk tradition in general.

Wade, I am jealous! I never got to study Old English or elf-lore. Maybe when I retire...

Old English in its alliterative poetry is a wonderful thing. It is an inflected language (fluid word-order because the word endings tell you if the world is noun or object, etc.: you can I say "Momma Bill threw from the train," in Old English such that the endings clarify who threw whom :-) ). The vocabulary will sometimes remind you of modern English words, which is why many English departments do not let students count it toward a foreign language requirement -- which is plumb crazy -- it is a foreign language, period, with as much mystery as German and French. I commend you to its study; I have some audio recordings of my professor, the late Robert Creed, among the the top in the field in Old English prosody, if you want to hear the language performed. I have a hard time with languages, so I beat my head against the wall to get basic translation ability, but your mileage may differ (Old Irish is much harder, like Chinese. I had concussions from that....)