There were three stories related to New England folklore in the media this week. Very often there are none, so it's a bonanza!


First, my good friend Ed directed me to this article in The Providence Journal about some very old shoes found underneath the floorboards at the Old Colony House in Newport. The brown leather shoes date from the 1830s, and were probably left there when the Old Colony House was being renovated in the 1840s. Shoes are often found in the walls and chimneys of old buildings, and it's believed they were placed there while the buildings were under construction to bring luck. The Old Colony House is still standing so I guess the shoes worked their magic. 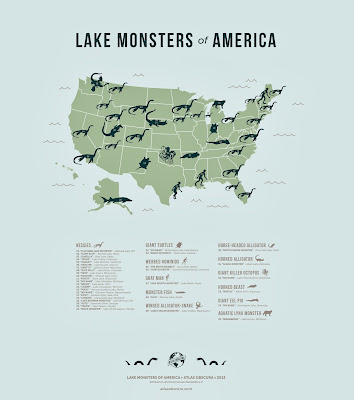 New England is represented by four aquatic oddities. In Vermont's Lake Champlain  you can find Champ, a cousin of the Loch Ness Monster who has been seen swimming in the lake since the 1600s. In Maine, the White Monkey (a small pale-skinned man with webbed hands) haunts the Saco River and was last seen in the 1970s. Also in Maine, Lake Pocomoonshine is inhabited by a serpentine monster who leaves enormous snake trails through the woods surrounding the lake. And last but not least, a sea monster has been seen of the coast of Gloucester, Massachusetts for hundreds of years.

Many other New England lake monsters and sea serpents are not shown on this map, but I still learned a lot from it. I never knew there was an aquatic goatman in Texas or a lake monster called Slimy Slim in Idaho!

Finally, the Boston Globe's travel section has an article about places the Vikings visited in New England. Or, more accurately, places people have at one time or another said the Vikings visited. There is no firm proof Leif Erikson amd his crew made it this far down the coast when they visited North America, but the article lists some fun places to visit including stone towers in Weston, Mass. and Newport, Rhode Island.

That's all for this week. Next week, a haunted hotel in the White Mountains!

Thanks for review, it was excellent and very informative.
thank you :)