Have you ever seen The Shining or the read the book? When I was young I thought the haunted Overlook Hotel was based on the Mt. Washington Hotel in New Hampshire.

I was wrong. The Overlook Hotel was actually based on a hotel in Colorado where Stephen King worked when he was young, but sometimes truth really is stranger than fiction. Even though the Mt. Washington Hotel doesn't have a connection to The Shining, it does have a resident ghost.

Here's the story. Construction on the Mt. Washington Hotel was started in 1900 and completed in 1902. The largest wooden building in New England, the hotel was the brainchild of Joseph Stickney, a wealthy industrialist. Unfortunately Mr. Stickney didn't get to enjoy his hotel very long, dying only one year after it opened to the public.

You might think the ghost that haunts the Mt. Washington is poor Joseph Stickney's, but apparently it is his wife's. Carolyn Stickney remarried a European prince shortly after Joseph's death and enjoyed spending her summers at the hotel. She built a private dining room for her and her friends, and also had a special balcony constructed that overlooked the hotel's main dining room. This allowed her to see what other guests were wearing and change her clothes to ensure she was the best dressed woman in the room.

After Carolyn died in 1936 the staff at the hotel started to report strange things. During the empty winter months caretakers claimed they saw an elegant woman walking into the dining room and that lights would turn themselves on and off. When a posed photo of the summer staff was developed a shadowy woman could be seen looking at them through a window, but no one had been at the window when the photo was taken. Creepy!

Interestingly, the architects who designed the hotel incorporated what they considered an anti-ghost measure. The hotel has several towers, and the number of stairs leading up to each tower is different. This is supposed to confuse ghosts and encourage them to leave, but I suppose since Carolyn Stickney was so intimately involved with the hotel her spirit is not fazed by oddly numbered steps.

Luckily for hotel guests Carolyn's ghost is harmless. As a former hotelier she's not going to do anything to hurt business! Still, the unprepared might find themselves frightened, particularly if they stay in room 314. This elegant room used to be Carolyn Stickney's private apartment and it still contains the giant four-poster bed she slept in. 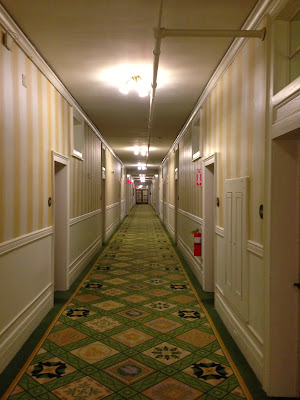 Guests staying there often report uncanny incidents. For example, according to this review on Trip Advisor, one family staying there experienced a flickering lamp, the fireplace turning itself off and then back on again, and a child's toy disappearing and then reappearing. The management's response on Trip Advisor? "Thank you for sharing your experience from your recent stay with us at the hotel. We are very pleased that we were able to meet your expectations..."

The hotel's management doesn't make any secret of the ghost, and actually recount the ghost legend on their website. A clever marketing ploy? Perhaps, or maybe they're just notifying guests of what they might experience. When Tony and I were staying at the Mt. Washington in November we had dinner with some family who live in the area, and conversation turned to the hotel's ghost. One family member had attended a conference at the Mt. Washington where supplies kept strangely vanishing, and she also had a friend who had stayed in Room 314. The friend had indeed witnessed flickering lights and the shower turning itself on and off when no one was using the bathroom. Again, creepy!

If you want the full haunted hotel experience I recommend visiting in early November like Tony and I did. It's between foliage and ski season, and the hotel when we were there was pleasantly quiet despite the presence of three small conferences. It's a really big hotel! If you tire of ghost hunting the Mt. Washington has a spa, activities like horse back riding, and miles of trails. I hiked into the woods for three hours and didn't see a single other person. I did see an otter and pileated woodpecker. Not as exciting as a ghost but still pretty cool.

I love your blog. Keep it up.Visit my site too.

I stayed in room 324 this last weekend. I had not heard the Hotel was haunted before I checked in but became convinced it is. There was a tapping sound coming from my walls and all the lights turned on by themselves at #AM in the morning waking me up. I was the only one staying in the room and had turned off all the lights when I went to bed

I'm glad I didn't read this until today. My fiance and I just stayed in 324 and minus the lights had the same experience. Waking up nightly from nightmares to hear the noises you described. We loved our stay overall but can't deny the terrifying nights.

Same thing happened to me years ago. I do t remember the room number, but it overlooked the front entrance. We complained and were moved to one of the tower suites for the remainder of stay.

This site can be a stroll-through for all of the info you wished about this and didn’t know who to ask. Glimpse here, and also you’ll positively discover it. online casino games

The Mount Washington Hotel looks so beautiful and I would love to stay there, ghosts or no ghosts! It does remind me a lot of one my favorite hotels in my home state of Colorado, also apparently haunted. It is the Stanley hotel in Estes Park, Colorado, which was indeed the inspiration for Stephen King's book The Shining. The Timberline Line Lodge in Oregon was used to film scenes for the Stanley Kubrick movie but Stephen King used the Stanley itself when he filmed his own made-for-TV movie version. I stayed in it once many years ago, and it was the spookiest-feeling hotel I ever stayed in, but alas, I experienced no ghostly manifestations. I will have to stay in room 314 at the Mt Washington someday and see if I have better luck!

My husband and I visited the Mt Washington Hotel in 2015. The audio recording of Princess Caroline has stayed with me since I heard it. We had no plan to stay there, but inquired and as it was over $500 per night, we regretfully declined. I did make my way upstairs and asked the maid if I could peek at room 314. I felt nothing unusual in the room and am intrigued by the theory of some sort of time shift anomaly where the Ghost Hunters crew were audible to Caroline and she to them (albeit not until afterwards on the replay-they did not hear it with their ears). One theory I’ve heard has to do with the type of terrain in the area, or a deposit of rock nearby that has conductive properties.