Traditions and Magic for a Snowy Day

The first snowstorm of the year is always exciting to me. I like the way it transforms the city into someplace magical, even just for a little while. Everything is so quiet and bright. Of course then the plows come...

Not surprisingly, there are quite a few traditions and divinations associated with snow from New England. Apparently I'm not the only one who thinks it's magical.

I think most people associate Christmas with snow in their minds, but even though we're all dreaming of a white Christmas in reality there's no guarantee of one in much of New England, particularly in the southern parts. I suspect we all want a white Christmas because snow is pretty and makes a nice backdrop for holiday lights, but there's also an old saying that "A green Christmas means a full graveyard." Not only is it pretty but I guess snow is good for your health.

However maybe we shouldn't literally be dreaming of a white Christmas, but rather just hoping for one, because another tradition claims that to dream of a snowstorm is a sign of the speedy death of a relative. 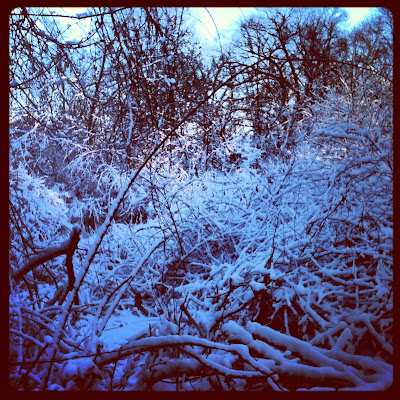 Not all the New England snow traditions are quite so gloomy. People in Winn, Maine used to say that if you rub your hands with the first snow of winter you won't have sore hands all season. I'm sure this was good advice for the hard-working farmers of Winn, and probably would still be useful for those of us who spend our lives at keyboards today. If you try it out let me know if it works.

This next belief may or may not be gloomy, depending on how much you like snow. In the nineteenth century people in Massachusetts believed the following:


The day of the month of the first snowstorm indicates the number of storms in the year.

Let's see, yesterday was the fourteenth so that means we'll have fourteen storms this year. If we count the one we just had we'll only have thirteen. Depending on your feelings about snow this could be good news or it could be devastating.

Lastly, here's something to remember for next year: if you wish on the first snowflake of the season you'll get your wish.

I found this information in Fanny Bergen's 1896 book Current Superstitions.