Where the Witches Hid: Four Legendary Witch Locations in Massachusetts

When the Salem witch trials happened in 1692, most of the accused were arrested and put on trial. A handful, however, got wind of their arrest and fled Salem. Philip and Mary English escaped to New York, while John Alden either fled to either New York or Duxbury. Constable John Willard ran off to Lancaster, but was arrested there and ultimately executed in Salem.

The Salem witch trials loom large in the history of Massachusetts, and many legends have developed around them. Here are four legendary locations where victims of the Salem witch trials supposedly hid from their persecutors. Is there any truth to these legends? Read on...

There is a forested area in Beverly called Beverly Commons, but it was once known as Witches Woods. One explanation for this name is that Giles Corey, one of the more famous victims of the Salem witch trials, fled Salem Village home after being accused and hid in Beverly.

I haven't found any evidence that Corey hid in Beverly before his arrest. Corey's fame rests on the fact that he was crushed to death with heavy stones while being interrogated by Salem's sheriff. Folklore claims that he stubbornly refused to answer any questions as the stones were piled on his body and his only dying words were, "More weight." His story and reputation grew over the years, and in the 19th century a poem called "The Ballad of Giles Corey" even claimed he was a sinister wizard and not a victim of injustice. But there's nothing to show he fled to Beverly.

I certainly understand the temptation to connect an infamous historic personage like Giles Corey to a locale with an odd name. But I think Witches Woods got its name for an even stranger reason. According to Caroline King Howard, a wealthy Salem resident who vacationed in Beverly with her family in the 1840s, Witches Woods was said to the location of a haunted farmhouse. The farmhouse usually appeared as an old ruin, but at other times it seemed to be inhabited and in good repair. Travelers often got lost in the woods near the strange house, wandering for hours in an area that was not that large. A headless ghost also reputedly haunted the woods, wandering sadly among the trees with his head under one arm.

After farmer John Proctor of Salem Village was accused of witchcraft, his pregnant wife Elizabeth fled north to Rockport on Cape Ann. Her sons lived in that town and built a house to shelter their mother. The house, called the Witch House or the Garrison Witch House, is still standing today.

This is another legend that is probably not historically accurate. Elizabeth Proctor was imprisoned with her husband but her execution was delayed because she was pregnant. She was not executed and she and her child were released from prison in May of 1693. There's not evidence that she fled to Rockport. 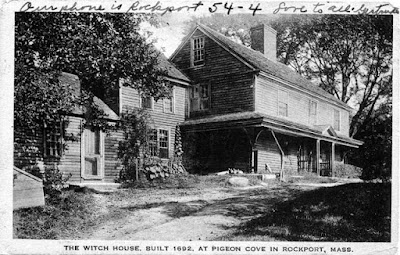 I do wonder how and why the legend of Elizabeth Proctor became attached to this house. I also wonder if the house was originally associated with some other witch whose name has long been forgotten. Although the Salem witches are the most famous in the state, there were hundreds of witches in Massachusetts, both legendary and historical, who are less well known.

It's also possible the term "Witch House" might have just meant "old creepy house." When I was a child in Haverhill there was a spooky looking Victorian house a few blocks from us. It loomed above the street on an embankment and was in perpetual disrepair. I sometimes heard people refer to it as the "Witch House." No one said a witch actually lived there, but it looked like one might.

Witch Rock is a large boulder in Southeastern Massachusetts. When I first wrote about it several years ago I was aware of four interconnected theories explaining its name:

1. The rock was originally the site of local Native American religious ceremonies. When the Puritans arrived they mistakenly identified these ceremonies (and the rock) with witchcraft.

2. When the Puritans arrived they noticed that the Native Americans avoided the rock and therefore they named it Witch Rock. 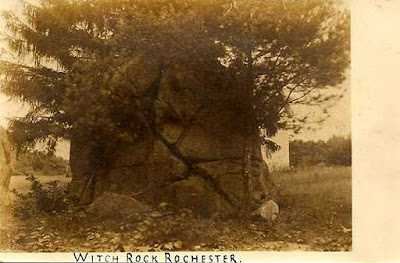 3. According to a Rochester legend, the soul of an executed witch is trapped inside the rock, along with some nefarious demons. The witch and demons can sometimes be heard howling from inside as they try to escape through the boulder's cracks.

4. The local Native Americans thought a witch was trapped inside the rock.

Commenters on my blog pointed out that there was also a fifth explanation. One of Rochester's early settlers was a man named Mark Haskell. According to tradition, Haskell was asked to be a juror in the Salem witch trials. He refused, and to avoid persecution he fled south to Rochester. He took shelter near a large boulder, which was named Witch Rock in commemoration. This story seems to be well-known among Haskell family genealogy buffs, and Mark Haskell is often referred to by them as Witchcraft Mark.

I really don't know which of these theories is correct. Perhaps there is some truth to all of them? The boulder has been called Witch Rock since at least the late 19th century, and even today it is painted with the image of a witch and is often the site of Halloween festivities. The legend lives on!

Many years ago Tony and I traveled out to Ashland to find the mysterious Witch Caves.

After the witch trials ended in 1693, the families of those who were accused moved west out of Salem to Framingham. According to tradition, they sheltered in a series of caves while they built houses in their new home. The caves are now located in a large park in Ashland, which split from Framingham in the 1840s.

It took us a while, but I think we found the caves that day. They were filled with dead leaves a yard deep and didn't look that safe, but here are a couple photos from way back in 2012. Forgive the low quality! 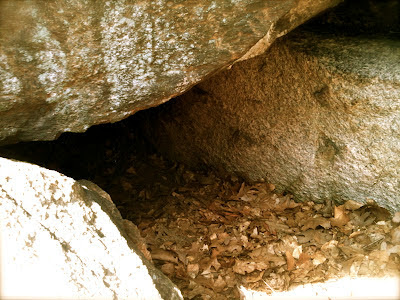 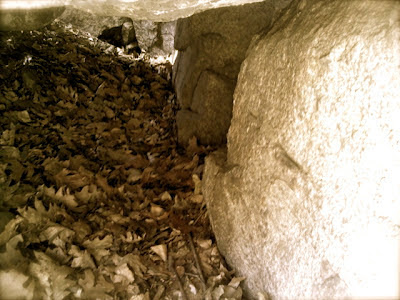 Did refugees from the Salem witch trials live in these caves? It's possible. Families from Salem did settle in this part of the state - a Framingham street near the park is named Salem's End Road, and historians have confirmed that a house on that road was built by Sarah Clayse, who was the sister of Rebecca Nurse and Mary Easty.

Rebecca and Mary were executed as witches during the Salem trials, while Sarah was only imprisoned. After the trials ended she and her husband Peter left Salem for Framingham. They didn't want to live near the people who had murdered their relatives. Several other Salem families followed them. So there is some basis to the Witch Caves legend. We don't know for certain that the refugees lived in the caves, but we do know that the settled in that area.

Do you know any other legends about places where witches hid? Please leave a comment if you do. I'm curious to learn more.

You left out Salem End in Framingham!

Are you sure it is John Alden? I am a descendent of him and Priscilla Mullens, first to step off the Mayflower. I had always heard it was his son Joseph. Just curious.

Hi Andrea! Thanks for reading. I include information about Salem End under the Witch Caves, but probably could have written more about it.

Hi Unknown! Thanks for reading.

John Alden Jr. was accused during the Salem trials. He was the son of John Alden and Priscilla Mullins, who had 10 children, including John Jr. and his brother Joseph. A lot of these names blur together!

I descend from John Proctor who was hung for witchcraft and his second wife of three, Elizabeth Thorndike. She is not to be confused with his third and last wife, also Elizabeth.