The Two Voices: A Ghost Story from Maine

It's been a busy few weeks, what with Halloween, the election, and some big projects at work. But now I finally have a moment to breathe and work on the blog. So here's a story that was told to me by a family member. She swears it is true, and I have no reason to doubt her. It's pretty creepy so don't read any further unless you want to be unsettled.

Laurie is a nurse, and many years ago she was working at a hospital in Maine. She was on the night shift at the ICU when the following strange incident occurred.

Laurie and one other nurse were the only staff in the ICU that night. The hospital was a small one, and there was only one patient in the unit: a middle-aged man who had been comatose for several weeks. His prognosis was not good and the doctors thought he would soon die.

As Laurie and her co-worker sat at the desk that night they heard something odd coming from down the hall. It was the voice of a small child. "Help me! Help me!" the voice said. "He's coming to get me!" It sounded like it was coming from the comatose patient's room. 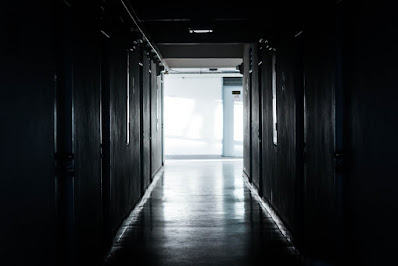 Visiting hours were long over - it was after midnight. No children were supposed to be in the ICU. Laurie and her co-worker ran down the hall to the patient's room, but when they went inside there was no one there except the patient. He was lying immobile and unconscious in the same position he had been in for weeks.

Puzzled, Laurie and her co-worker returned to the nurse's desk. But as soon as they were seated they once again heard the small child's voice. "Help me! Help me! He's here!"

They began to walk down the corridor back to the patient's room. As they drew near to it they heard another voice. Not a soft child's voice, but a deep, hoarse voice. Something about it sounded sinister. "I have you now," it said. "You cannot escape from me."

Laurie and her colleague ran into the patient's room. There was no one inside except the comatose man and he was still lying in the same position.

Laurie and the other nurse left the room. By this time they were starting to feel a little spooked. They returned to the nurse's desk and sat down.

Again, they heard the small child's voice coming from down the corridor. "Help me! Help me! He's here to take me away!" They heard the other, deep sinister voice laugh.

Laurie looked at her co-worker and said, "I'm not going into that room again." Her co-worker nodded in agreement. "Me neither."

Was there something supernatural happening in the patient's room? Or were both of the voices coming from him? I suppose that all depends on your worldview.

Sometimes a near-death experience will be absolutely horrifying--terror and torment everlasting. The patient may have been having that sort of NDE.

I am puzzled, naturally enough, that the two voices were audible down at the nurses' station. "There are more things in heaven and earth, Horatio, ..."

Hi Anonymous! Thank you for your comment. Yes, this story is reminiscent of that poem. It's very archetypal.

Hi Robert! That was my feeling too - that this was some type of NDE, though whether purely in the man's mind or external to it I can't say. Clearly he wasn't see a tunnel of light with loved ones at the other end. The voices are what make it unusual and scary.