Do you ever wonder what happened to the survivors of the Salem witch trials? Where did they, and the family members of those executed in Salem, go after the trial ended?

They went to Framingham, Massachusetts.

In 1693 the families of Rebecca Nurse, Sara Cloyes, Mary Esty and others got the hell out of Salem. Following an old Indian trail they relocated to Framingham, where they founded a small settlement called Salem's End. The trail still exists today as Salem End Road.

According to local legend, when the refugees first arrived in Framingham they had to shelter in caves before they built their houses. What remains of these caves is now located in Ashland Town Forest. (Ashland did not become an independent town until the 1840s).


Tony and I recently took a trip out to Ashland to visit the caves. The Town Forest, which was also once inhabited by the Magunkook Indians, is about 500 acres in size, and we had to walk for a mile from where we parked the car on Salem End Road. 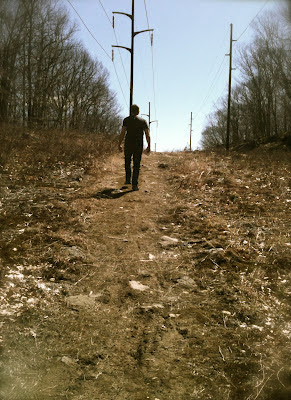 The forest clearly has been used for many different things over the centuries. It was criss-crossed with lots of old stone walls, indicating it had once been farmland. In the 20th century it was used as a hunting ground by some of the local riding clubs. 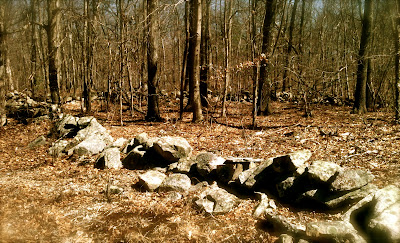 We found this old Bel Air, which looked like it was from the 1950s. The park abuts a very upscale neighborhood, so I thought it was interesting the town has left it there. Maybe like us the parks commission thinks it is kind of cool. 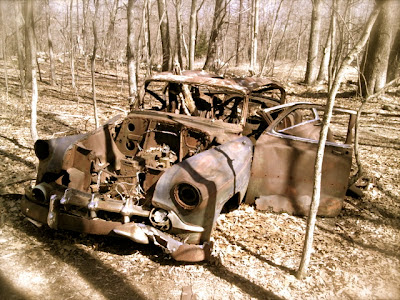 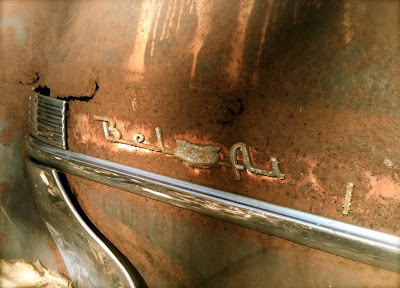 The forest is full of huge granite boulders deposited by glaciers, and the caves are located in a large ridge near a water tower.


We had read that the caves have collapsed, or at least partially collapsed. However I've seen fairly recent photos of the caves so we weren't sure what to believe. We climbed around the boulders for quite a while looking for the caves. I have to admit we weren't really equipped for climbing giant rocks, and the ground was really slippery from all the dead leaves which were a couple feet deep in some places.

Just as we were about to leave I decided to check out part of the ridge that is very close to someone's backyard. (But I didn't trespass!) And yes, we actually found a cave. I think it's kind of funny that we walked for a mile and climbed up and down the boulders, but the cave is basically next to someone's house. If I lived there I would spend every day hanging out at the Witch Caves! 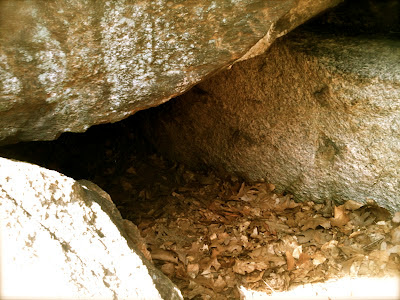 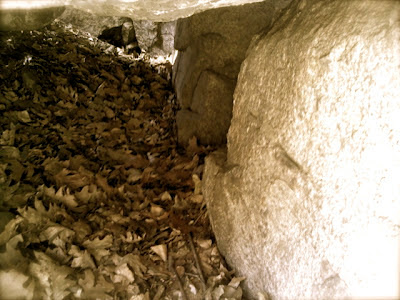 The cave we found looked pretty small, but I think centuries of oak leaves have probably reduced its original size. It seems to have multiple small chambers, and I can imagine desperate refugees crawling in there to shelter from rain or snow. If you were fleeing from people who wanted to execute you for witchcraft you'd probably be pretty desperate.

However, Tony and I didn't crawl into the cave for a couple reasons. One, we didn't know if the oak leaves were covering solid stone or hiding a pit, and we really didn't want to find out. Two, since the other caves have collapsed we didn't feel too secure about this one. Those are some big boulders in the photos!

If you go to the cave I don't recommend crawling into it. It's probably not safe. And after all, you're not being chased by villagers carrying torches and pitchforks.

This is amazing. I've done some research on the Salem Witch hysteria...mainly as a direct descendent of the Ingersolls and as a historian with a focus on New England. I would love to go to these caves.
I had a similar experience when I went to some Medicine Caves in Vermont, only I went inside and looked around with the light of my cell phone. It was worth it.
Great Blog...

Hi Maryjane! Thanks for the comment. I was pretty surprised to learn about these caves while I was poking around on the web - who knew such a place existed? Where were the caves you visited in Vermont?

Love this site -- such jaunts are always fascinating and instructive. Attention-getting rocks often seem to attract folklore. When a cave is far too small to be really practical, the other possibility is that the process of folklore becomes more important than that of history.

The story counts more than the details, in other words, even though we might imagine it would have been better to hack away a few tree limbs (I assume there were plenty in ~1700) to create a temporary shelter that *would* fit.

In my surveys in Ireland I found that folklore frequently insisted the existence of tunnels and things from natural prominances and human-made places, even when that was highly unlikely. Interestingly, I found similar a legend told by a family member about Mystery Hill in North Salem, NH (now "America's Stonehenge"), which is solid bedrock! Again, the process becomes more imporant than history.

Great find. I love those hikes into woods based on a few stories and photos. Sometimes they end up frustrating, but they're great adventures.

Wade - I have written about quite a few rocks - Dungeon Rock, Anawan Rock, Boise Rock. If I wanted I could probably devote this entire blog to famous rocks of New England (but I won't)! Clearly in Ireland the faeries made the tunnels through solid rock...

Wicked Yankee - I agree! It's always great to get out into the woods and see what's lurking out there.

Good article,this is really useful for me.

I grew up across the street from these woods and spent countless days of my childhood climbing these rocks and digging through the witch caves. Being pre-internet, we had no idea what we'd found. We didn't even know they were called the witch caves! What is really odd is that we made up stories about the caves being the place where witches hid. Maybe some of their story still lives in the caves and seeps into kid imaginations! Anyway, I remember one summer we found one cave, somewhat collapsed, with a ruggedly built stone wall blocking up an entrance deeper into the cave. This wasn't anywhere near a house, it was deep in the forest just off a trail. I'd love to find it again, now knowing for sure the history of the area.

Thanks for the read. I plan to visit sometime soon (I hope) and see the places my ancestor, Sarah Towne Bridges Cloyse, lived, both the caves and the run down house at Salem's End. Regardless, thank you for read, I enjoyed it.

This is awesome information! !

I lived at 948 Salem End Road for 20 years. My grandparents built there house there in 1974! There wasnt much construction back then

I had no idea about this historic Rd either

I didn't either. I knew about Sarah house but that was it

This is right by my house. As a child I explored this whole area and loved to play in and around the vast amount of glacial rocks in these woods. We actually found tons of strange symbols carved into trees and written on rocks. We always felt this area was magical...I had no idea of the history.

Anonymous, thanks for the comment. The rocks are very cool, and I would agree the vibe is magical.

First & foremost, I thoroughly enjoyed this article and the link, "recent photos of the caves."

I was fortunate enough to have visited Ireland for two weeks four years ago. Alas, I found no faerie tunnels but I just KNOW they are there!

Ireland IS almost mystical. I spent 4 days at Glendalough, where St Kevin, the hermit saint blessed & healed pilgrims & injured/wildlife in the sacred waters of the twin lakes. Before dawn my last day there I trekked up to the Upper Lake & bathed. I don't know that it was magical but I believe it was spiritual.

I visited New England when I was only eight years old. The pins allegedly used by the "witches" to torment the girls were on display & made a huge impression on me. But I was really too young to really appreciate the history, it, I asked who won the Revolutionary War. Hmmm. I'd love to visit again & the Witches Caves would be a terrific side trip. Again, great article