A Werewolf in Pawtucket, Rhode Island

Many, many years ago when I was a small child I saw Abbot and Costello Meet Frankenstein (1948) on some local TV station. Although this movie is a very broad comedy, I was still really scared by the monsters in it, particularly by the Wolfman. I was probably five years old so maybe this is understandable, or maybe I was just a really cowardly kid. Regardless, the Wolfman was portrayed by Lon Chaney Jr., and his transformation from a mild-mannered human to a hirsute and ferocious monster terrified me.

He was also the most sympathetic of the movie's monsters, though, so I was also fascinated. Once I got over my fear of werewolves I learned to love stories about them. Sabine Baring Gould's The Book of Werewolves (1865) is a good source for European legends, as is Montague Summers's The Werewolf in Legend and Lore (1933). Both of those are easily available, but sadly, there isn't too much written about New England werewolves. Maybe that's because we don't have a lot of werewolves here, which could be a good thing depending on how you feel about ravening monsters.

The word werewolf comes from an Old English term, werwulf, or man-wolf, and refers to a human who can transform into a wolf. The reasons for this ability vary in old legends and include things like curses, deals with the Devil, or witchcraft. The idea that someone can become a werewolf after being bitten or scratched by one is a more recent pop culture innovation. Lycanthropy (the fancy term for werewolfism) was originally considered a moral condition, not an infectious disease.

There are lots of New England legends about people transforming into animals, but they're usually about witches, and witches don't like to change into wolves. Witches prefer to transform into more discrete animals like birds, cats, and even horses. It's easier to cause mischief that way. No one suspects an innocent-looking bird but people are pretty suspicious when a wolf shows up. Still, during the Salem witch trials Tituba confessed to seeing cats, birds and wolves in the company of witches, implying that these were either demons or witches in animal form.

That's not the only local connection between witches and wolves. There is also an obscure legend that one of Cape Ann's Dogtown witches, Daffy Archer, may have been a werewolf or had one at her command. You can read more about the Dogtown werewolf here.

Some of New England's other werewolf legends come from French-Canadian immigrants, who brought stories of the loup-garou with them from Quebec. A loup-garou is someone, usually male, who has signed a deal with the Devil and can transform into a wolf. They are scary and dangerous, but happily can be repelled by prayer and religious symbols, as this tale from Vermont shows. 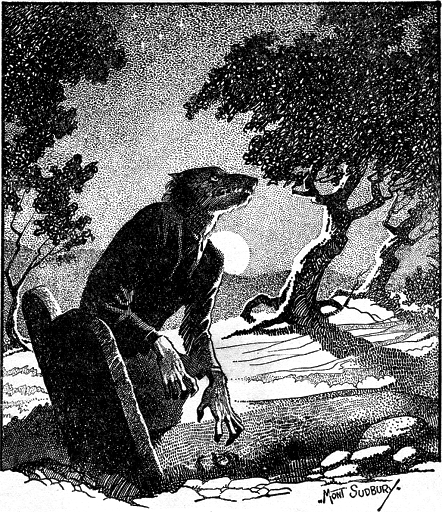 Those stories are over a hundred years old, but I just read another werewolf account, and it's relatively recent. It appears in Albert Rosales book Humanoid Encounters: 2000 - 2009. According to Rosales, on December 16, 2008, four students in Pawtucket, Rhode Island decided to take a walk in the woods after finishing their exams. They followed an old waterway deeper and deeper into the woods. As they walked it became increasingly quiet.

Noticeably quiet. No birds. No squirrels. No breeze.

The students suddenly became aware that they were not alone. Someone - or rather something - was in the woods with them. The creature was about six feet tall. It stood upright like a man, but had the head of a wolf. The students stood still in terror, petrified that the creature would approach them.

The wolf creature looked around, sensing it was not alone, but did not see the students. Finally it ran off further into the trees and was lost to sight. After waiting to make sure it was really gone the students left the woods. One of the witnesses was convinced the creature was a werewolf.

What did the others think it was if not a werewolf? Rosales's book doesn't say. It also doesn't include some details that would be useful, like how old the students were or their names. Still, I'm happy to find another local werewolf story to add to my collection. This reads like a classic paranormal encounter: the journey out of consensus reality into the woods, the eerie expectant stillness, the advent of a strange entity, and the return back to the normal world.

The moral aspects of older werewolf stories are missing here. There's no witchcraft or deal with the Devil. Instead, we just have some young folks who have an encounter with a monstrous being in the woods. The lesson is not a moral one, but rather an ontological one: there are still monsters lurking out in the trees.

That's a great photo of the Wolfman, scary! We hunted wolves to extinction. Between 1810 and 1820, local farmers, who believed that wolves were denning in the blowdowns, set fire to the mountain again. (Mount Monadnock, N.H.)

Hi Brooks! It is really sad about the local wolves. I feel like the coyotes now are taking their place in the eco-system. Maybe we will see some were-coyotes showing up soon?

In 2012 in east greenwitch me and a friend saw a "werewolf" and it was at the same moment, when talking about what i had just seen i described the creature and he cut me off towards the end and said "with the head of a wolf" confirming i wasnt alone. geostlaurent1212@gmail.com