First there was the COVID-19 pandemic, followed by the huge recession and staggering unemployment. There were ongoing murders of unarmed Black people by police. This July was the hottest July on record in Boston. It looks like the president is trying to cripple the Postal Service to impede voting. Eastern equine encephalitis is back again in Massachusetts.

You get the picture. But to make things even worse, Annabelle the evil doll escaped from a museum and is running amok.

Well, at least that was the rumor spreading on social media. First, for those who don't know, Annabelle is an allegedly possessed doll who first came to fame in The Conjuring (2013). That movie is partly based on a true story involving Ed and Lorraine Warren, two paranormal investigators from Connecticut. The Warrens, who are now both deceased, claim that in 1970 a nursing student in Hartford received a Raggedy Ann doll named Annabelle as a gift.

The student and her roommate, also a nursing student, noticed lots of strange things happening in their apartment after Annabelle arrived. They became concerned when Annabelle began to move around on her own and consulted a psychic, who told them the doll was possessed by the spirit of a child who had died in their apartment. The dead child felt comfortable around the two young women, which was why it had inhabited the doll. 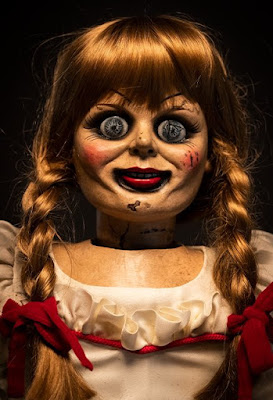 The two women were compassionate and decided to keep Annabelle. Who can resist a lost child? They changed their minds, though, when Annabelle tried to choke one of their friends. Suspecting this was no ordinary ghost child, the women brought in the Warrens, who confirmed their suspicions. The doll was actually possessed by a demon masquerading as a dead child. Yikes.

The Warrens took Annabelle and placed her in a glass case in their occult museum in Monroe, Connecticut, where she has been confined ever since. Interest in Annabelle increased after The Conjuring, and a fictionalized version of the doll starred in three movies: Annabelle (2014), Annabelle: Creation (2017), and Annabelle Comes Home (2019). 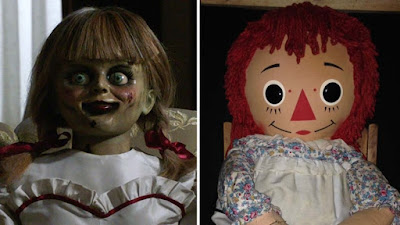 On August 14, 2020, rumors started to spread on social media that Annabelle had escaped from her case in Monroe and was going to spread evil. This would be a serious matter if it were true, but it's not. According to Snopes.com, the rumor all began with an interview given by actress Annabelle Wallis, who appeared in two of the Annabelle movies. In that interview, Wallis talked about running and escaping from danger in 2017's The Mummy. International social media sites picked up the story, and through a series of misunderstandings "Annabelle Wallis, actress, discussed escaping in a movie" changed into "Annabelle, evil doll, has escaped." It makes perfect sense to me, and I can understand why the rumor spread. 2020 already seemed like the year that anything could happen.

Happily, Tony Spera, the Warren's son-in-law, confirmed that Annabelle is still safely in her case. The Warren's Occult Museum was closed down several years ago by the town of Monroe due to zoning violations so sadly no one can see her. Like many of us, Annabelle is stuck in quarantine.

This story appeared in many places: New York Magazine, Newsweek, People, etc. I'm a little surprised, but I guess a demonic doll makes for a nice change from all the other bad news we're dealing with right now. Let's hope the rest of the year just brings more bizarre paranormal rumors, or maybe even good news for a change.