It's hard to believe Halloween is only three days away. Here are a few treats to get you through the next few days that I've found in the media.

ANOTHER BIG FELINE IN BROOKLINE

A few weeks ago I posted about an alleged mountain lion sighting in an urban section of Brookline, Massachusetts. I didn't really know what to make of it, but now I wonder if there really is some large cat roaming around town. On October 5, someone called the Brookline Police to report a bobcat on Shaw Road. Here is the item from the October 11 issue of The Brookline Tab:

Bobcat on Shaw Road: At 10:51 a.m., a caller reported seeing a bobcat cross the road and said the animal was "much, much larger than a domestic animal." The caller thought the area should be checked. 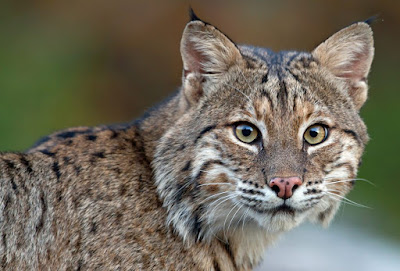 MONSTERS AND ALIENS IN LEOMINSTER

The Boston Herald ran an article about paranormal activity in Leominster, Massachusetts. The October 21 article titled "Talk of UFOs, ghosts turns Massachusetts City into 'Leomonster'" focuses mainly on Leominster resident Ronny LeBlanc who in 2016 wrote a book about his hometown called Monsterland. LeBlanc collected hundreds of stories for his book, so it sounds like something I should add to my holiday wish list. Here is an interesting quote from the Herald piece:

LeBlanc took the Herald to all the hot spots around Leominster, like St. Leo’s cemetery on Lancaster Street where in the 1960s, a couple witnessed a flying saucer emerge from fog, prompting them to call the police. The man who saw the saucer claimed his hand and body was frozen upon pointing to the saucer, only to be released when it flew away.

LeBlanc said he isn’t completely sure why these encounters continue to happen in Leominster, but “it might be something that we don’t want to know.”


I applaud anyone who investigates the strange stories and folklore of their hometowns. Books like Monsterland are valuable records of what people in 21st century New England believe about the places they live. They are also good to read on dark autumn nights!

Twelve of them take place across New England. Wood and Kolek visit old lighthouses, haunted restaurants, charming inns (built next to creepy old cemeteries), and even a few places I've visited like Dudley Road and the Freetown State Forest. 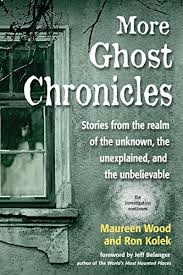 My trip to Dudley Road was relatively uneventful, but theirs is a little more lively. For example, here is an excerpt where Kolek and Wood try to communicate with the spirits of Dudley Road using a pendulum on a dark night. They are trying to figure out how many ghosts haunt the road.

Once again, the answer was a yes.

I asked, "Do they know the rumors about the haunting of Dudley Road?"

I continued. "Do they play games with the people who come to look for them?"

The pendulum swung back and forth. She laughed out loud. "Sometimes." (More Ghost Chronicles, p. 30)


Watch out for self-aware ghosts, I guess. Although my trip to Dudley Road was peaceful, I did find the Freetown State Forest to be kind of unnerving when I visited although I can't pinpoint why. Was it the sounds of gunfire from a nearby firing range? The group of drugged-out teenagers we encountered on a secluded path? The sound of dead trees creaking in the wind? All of these?

Or perhaps it was really the puckwudgies, small malevolent fairies who are said to live in the forest. Wood and Kolek have an even more unnerving visit than I did, with Wood becoming briefly and frighteningly possessed by the spirit of a puckwudgie. This is why I only go to these places during the day!

So, if you like good old-fashioned ghost investigations with creaking doors, rosaries that shatter, and misty figures advancing through the dark woods I think you will like More Ghost Chronicles. And at this time of year, who doesn't like those things?