Despite New England's rich history of witchcraft and ghosts, Halloween has only been celebrated here since the mid-19th century. The first English settlers were Puritan and abstained from celebrating holidays like Christmas and Halloween. The Algonquians who lived here before them of course did not observe Halloween, which is of European origin.

Things changed in the 19th century when large numbers of Irish and Scottish immigrants began arriving in New England. They brought their observance of Halloween with them. Although there were tensions between these newer Gaelic arrivals and the Puritan's Yankee descendants, the Yankees did slowly adopt Halloween as a holiday. By the early 20th century it was widely celebrated among both children and adults in New England and other parts of North America.

Now, onto the cats. The black cat was a popular Halloween symbol and appears in many descriptions of the holiday from that time. For example, the November 1, 1912 edition of The Vermont Phoenix describes the following party held by the Brattleboro Baptist Bible school:

... about 200 persons were present. Halloween games were played. The junior department held a party in the chapel, which was decorated with jack o'lanterns and black cats, the children making the decorations. Halloween stunts were performed.

According to November 4, 1909 issue of The Republican, black cats were also popular in Belfast, Maine:

The Halloween Whist party under the direction of the Universalist Social Aid in Memorial Hall last Friday evening was a social and financial success.... The main hall was decorated with pine trees, Halloween crepe paper, black cats and jack-o-lanterns...

The Belfast socialites were quite busy that Halloween; there were multiple parties to attend:

Last Monday night the young ladies of the Biliken club entertained the young gentlemen at a Halloween supper at Pensobscot cottage on the Allyn shore, with Miss Katherine E. Brier as hostess, assisted by Mrs. Luville J. Pottle.... The table decorations and place cards were in the form of sunflowers. The fortune cards were decorated with cupids, witches, black cats, etc.

And the October 29, 1910 issue of The Norwich Bulletin gave the following advice to Connecticut Halloween party hostesses:

The candle shades to give the effect of ghosts and witches should be of red and black coloring. Quaint little ones with the heads of black cats on them may be purchased at any store, but clever fingers can easily make them at home.

But why stop at candle shades? Why not have real live black cats in your party?

A pumpkin as centerpiece might hold a bowl of yellow chrysanthemums and if the hostess owns or can borrow a couple of live black cats it would give a most realistic effect to have these in the dining room rubbing against the guests.

Let's just hope your guests aren't allergic to cats. Newspapers at this time were also filled with ads for Halloween decorations, many of them black cat themed. For example, here is one in the October 29, 1912 issue of The Bridgeport Daily Farmer from Radford's department store in Connecticut: 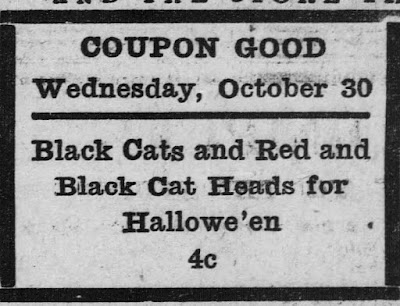 Using black cats as party decor probably doesn't seem strange to readers of this blog. Witches, ghosts and black cats are all just part of Halloween's festive ambience, right? But for our New England ancestors, Halloween represented a big shift in how they viewed the supernatural. Things that are now just considered spooky fun were once a very serious matter.

Cats, often black in color, appear in the 17th century witch trial accounts, and witch trials were very, very serious matters. For example, in 1692 a Boston serving girl named Mercy Short was tormented by demons after she taunted Sarah Good, who had been jailed for witchcraft. Short's demonic possession drew the attention of Boston's leading ministers, including Cotton Mather, and even of the colony's governor. During one of her fits, Mercy revealed that the Devil's "Book of Death" had been hidden in the attic of a neighbor's house. If someone could retrieve it her torments would stop. The governor commanded a servant to search the attic:

When the Servant was Examining the place directed, a great Black Cat, never before known to bee in the House, jumping over him, threw him into such a Fright and Sweat, that altho' hee were one otherwise of Courage enough, he desisted at that Time from looking any further (from Cotton Mather's A Brand Pluck'd out of the Burning).

Clearly, that black cat was not a laughing matter. Around the same time, Stephen Johnson of Andover, Massachusetts, age 14, confessed to the judges in Salem that the Devil had invited him at midsummer to become a witch. The Devil appeared first as a bird, then a black cat, and finally as a man before Stephen sold his soul to him. Mercy Wardwell, another Andover teenager, confessed that the Devil appeared to her as two cats.

The Devil was not the only one who took feline form. Witches often appeared as cats as well. The Cape Cod witch Liza Tower Hill took the form of a cat to terrorize a family who mistreated her daughter. John Godfrey, a witch from Haverhill, Massachusetts, took the form of a black cat and threatened Isabelle Holdred in her sleep after they argued over money.

Stories like these persisted in New England long after the witch trials ended. Sallie Somers, the alleged witch of Southwest Harbor, Maine, would spy on her neighbors in the shape of black cat. She died in 1832 when someone shot her in feline form with a silver bullet. In 1892, Clifton Johnson recorded a story in Western Massachusetts about a black cat whose paw got caught under a millstone. When the miller got home he found his wife with a damaged hand and knew she was a witch.

In the 1930s, people in New Hampshire also told a story about a witch in the shape of a black cat to Eva Speare for her book New Hampshire Folk Tales. And even in the 2000s, Christopher Balzano was told a story about a witch's ghost appearing as a black cat that walked on its hind legs for his book Dark Woods: Cults, Crime, and the Paranormal in the Freetown State Forest.

I don't cite all those stories to scare you, but just to show there is a very persistent tradition linking black cats with witchcraft and the Devil in New England. Given that tradition, it is amazing New Englanders were willing to abandon their superstitions and embrace the witches and black cats of Halloween. Clearly, cultural events like the Enlightenment and the Industrial Revolution played a big role in changing their minds, but it's still inspiring to read about New Englanders celebrating witches and black cats rather than hanging and shooting them. Things that once were frightening have become fun. Sometimes there is such a thing as progress.

Goodness! Never knew that Halloween in New England was so recent. It does make sense, though. If you’re of a sect that takes witches, cats, spirits seriously - and doesn’t believe in fun anyway - you’re not going to celebrate such a festival for fun.

Poor cats! I hate to think what might have happened to black cats in times when they were associated with witches.

I guess Halloween was every day for the Puritans, but only in the scary way, not the fun way. I don't think they were particularly gentle with animals, particularly those they thought were possessed.