Was Ann Burt A Witch? A Story for A Dark November Night

Halloween is America's designated 'spooky' holiday, but for me it is really just the kickoff to an entire spooky season. As the days grow shorter and the foliage falls the landscape is transformed. Summer is gone and there's no turning back now. We're sliding into the increasing darkness of winter, and atavistic fears and impulses emerge even in the daytime, which is growing ever more scant.

I guess that's a fancy way to say that my mind drifts to old stories of witches, ghosts and monsters at this time of year. Luckily, there are a lot of those stories to be found in New England, and some of them are even supposedly true. Here's an account of witchcraft from Lynn, Massachusetts from the long-ago year of 1670, when one Ann Burt was put on trial for being a witch.

Ann Burt arrived in Lynn from England in 1635 with her husband. She made her living as a healer, which was often a risky profession for women at the time. If a patient died, people might think you were a witch who used magic to kill them. If your patients did well, people might think you were using magic to heal them, in which case you were also a witch. So perhaps it is not surprising that after Burt's husband died around 1669 people accused her of witchcraft. 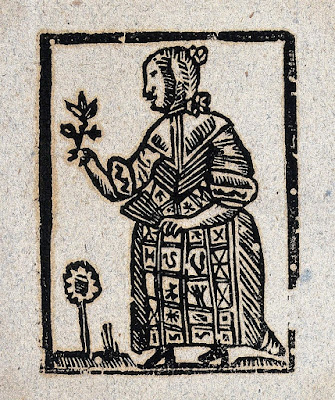 Various neighbors and clients testified against her. A young woman named Sara Townsend claimed that Burt said she could heal her, but only if she believed in "her god." Burt also said she was unable to save her own husband's life because he wouldn't believe. The nebulous term "her god" implies that Burt was not worshipping the Christian god but some other being, i.e. the Devil. After confessing this Townsend experienced fits which a physician (who was male and most likely one of Burt's professional rivals) said had no physical cause. Thomas Farrar, another Lynn resident, claimed that Burt tormented his two daughters and son in spectral form.

Several other people testified that Burt had the power to magically transport herself across space. A man named John Knight claimed that after leaving his house on an errand for his wife he saw Burt emerging from a swamp. She almost immediately vanished from sight. When he returned to his house he found Burt inside. She claimed she had never been in the swamp.

Another Knight, Jacob, age 25, told an even more bizarre story about Burt. Jacob Knight testified that while staying at the home of a Mr. Cobbet, where Burt was also living, he developed a headache. He mentioned it to Burt and then returned to his bedroom, which was separated by several doors from the room where he spoke with her. But when he looked up from tying his shoes he saw Burt was suddenly in his chamber, holding a bottle of medicine.  Upon her urging he drank its contents which made his symptoms worse.

After this Jacob Knight decided to leave Mr. Cobbet's house to stay with his brother in Salem, but he said that Burt perused him.


... and going to Salem, I saw a cat, which being out of sight again, I presently saw a dog it being likewise out of sight, I saw one before me, like unto Widow Burt, going before me down a hill as I was going up it, and so I lost sight of her.

That night, looking out the window of his brother's Salem house, Knight saw Burt riding a gray horse outside. She disappeared, but came to him again in his bedchamber later. He threw a piece of wood at her and she vanished.

Those stories are kind of creepy, particularly Jacob Knight's story of Burt stalking him in different forms. A witch riding a horse outside your house is like something from a nightmare. I don't know what month this allegedly happened, but to me the image is very evocative of this time of year.

But it's also not true. It gives insight into Puritan ideas about witchcraft, but Burt wasn't really a witch. She was just an elderly widow who got on the bad side of her neighbors. As I mentioned before, witchcraft accusations were a professional hazard for women healers in the 17th century, and at least three other female healers were accused of witchcraft in that time. One of them, Margaret Jones of Charlestown, was even executed.

Ann Burt was not executed, as far as historians can tell, and might even have been found innocent of the charge of witchcraft. Unfortunately the records surrounding her trial are incomplete, but it seems likely someone would have noted if she had been executed. So, perhaps a happy ending for Goody Burt?

I always have two reactions when I read these old witch stories. On one hand, I'm fascinated by their descriptions of uncanny occurrences and magic. They conjure up images of bleak landscapes, old houses with smoky hearths, sinister beasts, and neighbors with dark secrets. On the other hand, I realize that the witches in these stories were nothing of the sort. They were people who were unpopular with their fellow Puritans, often non-conformist women who earned the ire of the community. Innocent people were punished and sometimes died because of these stories.

It's important to keep both of these in mind as we slide into the dark time of the year. It's nice to enjoy the old spooky stories, but important to realize what happens when you believe them too literally. We need to keep our wits and stay rational until the days start to grow longer again.

I got my information about Ann Burt's trial from David Hall's Witch-Hunting in Seventeenth Century New England. It's a great book that I always shows me new things.