Why The Devil Loves Christmas

In 1662, Rebecca Greensmith of Hartford, Connecticut was arrested and charged with witchcraft. She confessed to meeting the Devil, but she denied having signed a contract with him. Well, at least she hadn't signed one at the time of her arrest. Rebecca and the Devil were waiting for a special day to sign it: Christmas.

The Reverend John Whiting of Hartford wrote the following in a letter:

But that the devil told her, that at Christmas they would have a merry meeting, and then the covenant should be drawn and subscribed. ... Mr. Stone (being then in court) with much weight and earnestness laid forth the exceeding heinousness and hazard of that dreadful sin, and therewith solemnly took notice (upon the occasion given) of the devil's loving Christmas. (quoted in David Hall's Witch-Hunting in Seventeenth-Century New England.)


That sounds a little strange to modern readers. Why would the Devil love Christmas? Isn't it a holiday about hope, love and charity?


Four-hundred years ago, Christmas was a very different holiday than it is today. It wasn't focused on family, gift-giving, and children. Instead, it was characterized by heavy drinking and public rituals that inverted the social order. Europe and its colonies were agricultural societies then, and food and alcohol were most plentiful during the late autumn and early winter. Crops had been harvested, herd animals slaughtered, and beer brewed. There was no more farm-work to be done.

In short, it was a great time to have a huge party. Wealthy people would feast themselves and their friends at home. People from the lower social classes, usually groups of young men, roamed around at night in disguise. The young men (called mummers) would usually target the homes of the wealthy, where they would perform a skit or song in return for food or beer. This is the origin of the wandering Christmas carolers so often portrayed in Christmas stories or movies. If they were denied entry or not given gifts for their performance, the mummers would retaliate with violence or by vandalizing property. 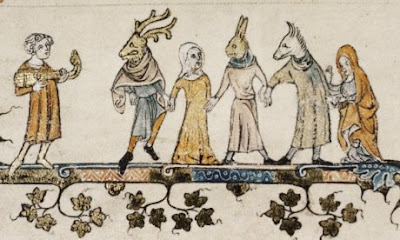 Some hints of this older-style Christmas can still be heard in the lyrics of Christmas carols. For example, "The  Gloucestershire Wassail" describes men threatening a butler to give them good strong beer and demanding entry to a wealthy person's home:

Be here any maids? I suppose here be some;
Sure they will not let young men stand on the cold stone!
Sing hey O, maids! come trole back the pin,
And the fairest maid in the house let us all in.


The lyrics of "We Wish You A Merry Christmas" describe something similar:


Christmas was raucous, drunken, socially disruptive, and occasionally violent. The Puritans valued order, sobriety, and hard work. They didn't want anything to do with Christmas.

During their brief tenure ruling old England the Puritans tried to suppress Christmas celebrations. The Puritans who colonized New England did the same. It was even illegal to celebrate Christmas in Massachusetts between 1659 and 1681. Anyone found doing so could be fined five shillings.


The Feast of Christ's nativity is attended with such profaneness, as that it deserve the name of Saturn's Mass, or of Bacchus his Mass, or if you will, the Devil's Mass, rather than have the holiday name of Christ put upon it. (A Testimony Against Several Prophane and Superstitious Customs, Now Practiced by Some in New-England, 1687).

Mather mentions Saturn for a very specific reason. The Bible doesn't provide a date for Christ's birth, and the early Christian church fathers decided to place it on December 25 to coincide with pagan Roman winter holidays like Saturnalia, which venerated the harvest god Saturn. This compromise between Christianity and paganism was another argument the Puritans used for hating Christmas.

So there you have it. That's why the Puritans thought the Devil loved Christmas. Their efforts to suppress Christmas were modestly successful. Christmas wasn't widely celebrated in New England until the mid-nineteenth century. Christmas is now the biggest holiday in the United States. The Puritans would have blamed Satan, but I think it's just because people like to have fun.

My favorite source for information about Puritans and Christmas is Stephen Nissenbaums's fantastic book The Battle for Christmas. It's great for anyone who wants to really understand the weird history of Christmas in America.

He wasn't wrong about the Saturnalia connection. I think that must be where they got the Lord of Misrule, because on the Saturnalia everything was upside down, with masters serving slaves, who gave orders.

Thanks for entertaining me with the fascinating folklore snippets. And have a hspoy Saturnalia!

Love this and your site . The artworks is also inspiring. Looking forward to exploring your blog more thoughtfully.
And merry Christmas -Saturnmas👹!

In the Tarot (whose origins date back to the 15th century), "The Devil" card corresponds primarily to the sign Capricorn. The astrological month of Capricorn begins on the winter solstice, Dec. 21, which lines up fairly close to Christmas. Capricorn is traditionally ruled by the planet Saturn, astrologically "the great malefic". One of the main traditional meanings of "The Devil" card is rampant debauchery, and losing one's way therein. All ties up quite neatly with the Lord of Misrule and the Saturnalia. Merry Christmas!

Hi Sue and Leonard! Thanks for reading (and appreciating!) the blog. It's always fun for me to share my strange interests with people who appreciate them.

Sean, thank you for the Tarot and astrological connections. It's really fascinating how old some of these traditions are and how they have changed (or not) since the Classical era.

Bret, what would Christmas be without Spinal Tap? Thanks for sharing!