The Monster of Lake Champlain

I recently was up in Burlington, Vermont, which is located on the shores of Lake Champlain. For those of you who aren't familiar with it, Lake Champlain is big! Really big! It's over 100 miles long and 14 miles wide. Strange things might lurk in a lake that big.

Well, according to local legends, something strange does indeed lurk in the lake. It's a monster named Champ, and it supposedly has been seen more than one-hundred times.

A lot of books and websites claim the creature was first seen by French explorer Samuel de Champlain way back in 1609, who described as "a 20- foot serpent, with a horse-shaped head and body as thick as a keg." This claim was even repeated by Discover magazine in 1998. Unfortunately, it just isn't true. De Champlain never wrote about a giant serpent in his journal. The story that he had seen Champ first appeared in a 1970 issue of Vermont Life and spread from there.

The real first sighting of Champ was reported on Saturday, July 24, 1819. A letter to The Plattsburgh Republican claimed that one Captain Crum had seen a monster while he was on the lake:

Captain Crum took a particular survey of this singular animal, which he described to be 187 feet long, its flat head with three teeth, two in the center and one in the upper jaw, in shape similar to the sea-horse - color black with a star in the forehead and a belt of red around the neck - its body about the size of a hogshead with hunches on the back as large as a common potash barrel - the eyes large and the color of a pealed (sic) onion... (quoted in Robert Bartholomew's The Untold Story of Champ: A Social History of America's Loch Ness Monster)


This account appeared shortly after a wave of sea serpent sightings near Cape Anne in Massachusetts. The letter was titled "Cape Ann Sea Serpent on Lake Champlain," and was signed "Horse Mackerel," so perhaps it was meant to be taken as a joke.

Later sightings were not quite so humorous. In 1826 two men fishing reported that a thirty foot serpent slithered out of a cave. They said it was covered in black and red spots and smelled terrible. In the summer of 1873 a group of men working on the lake's shore claimed they saw a large serpentine monster. According to the July 9, 1873 issue of The Whitehall Times,

From his his nostrils he would occasionally spurt streams of water above his head to an altitude of about 20 feet. The appearance of his head was round and flat, with a hood spreading out from the lower part of it... His eyes were small and piercing, his mouth broad and provided with two rows of teeth, which he displayed to his beholders. (quoted in Robert Bartholomew's The Untold Story of Champ: A Social History of America's Loch Ness Monster.)


Other people also reported seeing the monster that summer, and it was blamed for a rash of missing farm animals.

Champ has made many other appearances over the years. For example, in 1915 it disrupted a canoe race:

"The Lake Champlain sea serpent has again appeared to the astounded inhabitants of this place. He was seen at the encampment of the American Canoe Association when, coming to the surface in the neighborhood of a flotilla of cruising canoes, he scattered the occupants in panic." (The Burlington News, April 1915)


I also like this testimony from someone who saw Champ in 1981:


Is there any conclusive evidence that Champ exists? No, not really. If there was you'd read about Champ in biology class and not on this folklore blog. On June 30, 1981 the New York Times published the following photo of Champ taken by Vermont resident Sandra Mansi. Many people take this as the best evidence yet for Champ's existence: 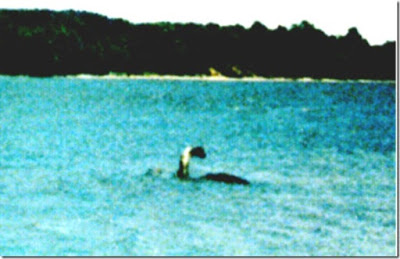 It's a great photo, but no one has ever been able to affirm its veracity. Mansi unfortunately threw away the negative, which prevented experts from looking at the image for more details. She also said she couldn't remember exactly where she took the photo. Several people have taken videos of Champ as well, but they are equally inconclusive.

Is Champ a giant prehistoric plesiosaur that has somehow survived for millennia in Lake Champlain? That seems unlikely. Is Champ just a hoax? I think that's unlikely too. Some Champ sightings may be pranks, but I think a lot of people sincerely see strange things on the lake.

Bodies of water are mysterious and full of latent power. Folklore and legends tell us that water hides secrets, like lost Atlantis, sunken treasure, and mysterious monsters. Maybe the initial Captain Crum story, which was probably a hoax, acted like a magic spell, summoning something people always suspected lurked in the water but had never been named. Champ could be a manifestation of Lake Champlain, given form through local folklore and showing itself to a select few. I didn't see Champ while I was in Burlington, but maybe one day you'll be lucky and see him yourself.