Foul-Mouthed Fairies and Spirit Possession in 1846

The Massachusetts town of Wrentham is perhaps currently best known as the location of some famous outlet malls, but the town is actually quite old. It was founded in the 1600s, and like a lot of old New England towns has at least one weird incident in its history. And so I relate the following set of bizarre events...

A prominent physician named Dr. Larkin lived in Wrentham in the early 1800s. Larkin was married, had at least one child, and was a member of one of the local Protestant churches. In short, he was part of the town establishment.

Unlike most of his neighbors, though, Dr. Larkin became interested in mesmerism in the year 1837. Also known as animal magnetism, mesmerism was founded by the German Franz Mesmer in the late 18th century. Mesmer believed that all animals were filled with a vital life force which could be manipulated to produce healing effects. Mesmerists would manipulate the life force through a variety of means including the laying-on of hands and hypnosis. 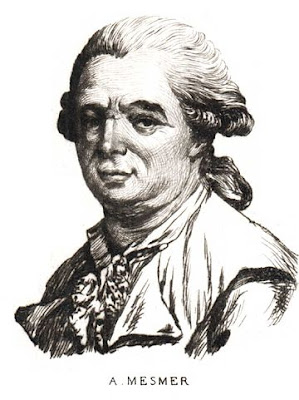 A young servant girl named Mary Jane lived with the Larkin family at this time. The Larkins were upstanding members of the community, but Mary Jane was something of an outsider. She had been born in Nova Scotia, was Roman Catholic (how shocking!), and was subject to strange fits. Dr. Larkin tried but was unable to find a physical cause for her fits or to treat them.

One day in 1844 Dr. Larkin had an "a-ha!" moment. Why not try to cure Mary Jane's fits through mesmerism? Mary Jane's fits improved slightly, but surprisingly when she was under hypnosis she was able to accurately diagnose the ailments of Dr. Larkin's other patients. Her diagnoses were so reliable that Larkin depended on her whenever he encountered an illness he couldn't diagnose.

So far so good. What doctor wouldn't want a magical office assistant? But of course that's not the end of the story.

Mary Jane claimed that while she was hypnotized she was attended to by a group of spirits. Some of them were quite benevolent. For example, a group of kind and lovely fairies from Germany would appear to her. Their leader was a female spirit named Katy whom Mary Jane claimed was her guardian angel. Katy was described as being beautiful and good, and it was she who supposedly diagnosed the patients. Sometimes when the good fairies appeared strange knocking sounds would be heard throughout the Larkin house, which seemed unusual, but they were minor inconveniences compared to the help the fairies provided.

Unfortunately, sometimes other spirits spoke through Mary Jane. These spirits were foul-mouthed and loved to spout obscenities at the doctor and his family. These nasty beings didn't just stop at swearing. They also engaged in poltergeist activity.

Her entranced lips, as if moved by automatic action over which she had no control, gave utterance to the most blasphemous oaths and rude speeches; at the same time the furniture was often moved about violently by unseen hands, and heavy weights were lifted from place to place. On one occasion, the whole family being assembled round the couch of the magnetized sleeper, and every door being shut, a heavy flat-iron, last seen in the kitchen - quite distant off - was suddenly placed in their midst, and at the request of Mrs. Larkin, as suddenly disappeared, and was next found in the kitchen...(American Spiritualism: A Twenty Years Record of the Communion Between Earth and the World of Spirits, Emma Hardinge, 1870)


The leader of the foul-mouthed spirits was a deceased sailor who swore as much in death as he did in life. Mary Jane sometimes called this spirit Captain Goodhue, and declared that he was king of the fairies. Goodhue could accurately (if obscenely) describe what Dr. Larkin did even when he was away from home. He also drank copious amounts of rum through Mary Jane.

The ghosts of other deceased spirits also began to speak through Mary Jane, and Larkin recorded the life stories of more than 270 of these entities. He supposedly was able to verify that many of their stories were true.

By 1846 Mary Jane's behavior had become even stranger. The drunken sailor's spirit would pull Mary Jane's limbs out of joint, and although this caused her no pain it made her unable to move until Dr. Larkin put them back in place. Other spirits hovered around Mary Jane, pinching her and causing her great pain. She told the doctor she was willing to endure this suffering because it would help stave off Mrs. Larkin's death, whose impending approach the spirits had warned her of. Mary Jane had accurately foretold the death of one of Dr. Larkin's children so he took her warning (and sufferings) quite seriously.

All these bizarre events drew the attention of Dr. Larkin's neighbors, and many of them began to mutter unfavorably about him. As you can imagine, people in a small 19th century New England town didn't take well to spirit possession, heavy drinking, and swearing maid-servants. Some neighbors were particularly annoyed because they were often called in to help the doctor put Mary Jane's limbs back into their sockets. A committee was convened to investigate, and Mary Jane was found guilty of disturbing the peace. (Some sources say the charge was actually necromancy.)

Dr. Larkin pleaded with the police not to arrest Mary Jane until she had completed the painful suffering necessary to save his wife. Although skeptical they honored the doctor's wishes, and waited the allotted time before arresting the servant girl. She was finally sentenced to sixty days in Dedham's jail for lewdness, indecency, profanity, and disturbing the peace. Upon hearing the sentence Mary Jane is reported to have said, "Is that all? Well, I think I can stand it."

As for Dr. Larkin, he was threatened with excommunication from his church unless he signed a document declaring that he didn't believe the living could communicate with the dead. Church membership was crucial for his professional success, so he signed.

There's so much happening in this story that I don't know where to begin. I guess I can start by saying I used two sources: Emma Hardinge's book and a newspaper article from the December 5, 1846 issue of The Portsmouth Journal of Literature and Politics. Hardinge was a Spiritualist and believed that everything that occurred at Larkin's was really caused by spirits. The Portsmouth Journal is quite skeptical and believes Dr. Larkin was taken in by a conniving servant. Real spirits or a hoax? I will let you decide for yourselves.

There is very little fairy lore from early New England, which makes this story even more unusual than it is. The Puritans who colonized this region brought over plenty of witch, ghost and Devil lore from England, but almost no fairy lore. I think it's significant that Katy was Roman Catholic and from Nova Scotia, a region whose colonizers did bring fairy stories to the New World. I suspect that she was probably Irish or Scottish.

Some of her behavior while possessed by the spirits was reminiscent of that shown by the afflicted girls in the Salem witch trials. I wonder if the town leaders had that in mind when they arrested her for disturbing the peace? They may not have wanted others in Wrentham to emulate her behavior.

Most modern Americans don't group fairies and dead spirits together, but the connection between the two is strong in some older European folklore. For example people often reported seeing deceased humans living among fairies, and it's not a coincidence that fairies dress in old-fashioned clothes. So-called fairy mounds in Britain and Ireland are often actually ancient burial mounds. And much like ghosts, fairies are often active around the dark time of year, including Halloween.

Special thanks to Simon Young of the Fairy Investigation Society for forwarding me the article from The Portsmouth Journal which inspired this post!

Oh, yes, fairies and the dead are certainly connected in some parts of Europe. I think there was a connection in Breton folklore, as was the Otherworld and the afterlife. And there are plenty of folktales in which beloved dead are seen with fairies.

What happened when Mary Jane got out of jail? Did she and the doctor save more patients?

I'm also curious about her physical and mental health before the spiritualism started. The article stated that she had fits the doctor could not explain. Could she possibly have been epileptic, or suffering from a mental illness? Both?

Hi Steve! I don't have answers to those questions but wish I did. Were the fits even "real" to begin with? They do remind me of the fits the girls suffered in Salem. I am assuming Mary Jane left town once she got out of jail, but it would be a good topic for someone to research more deeply.