This past weekend Tony and I went up to Salem with some friends. It's almost Halloween, so it's time to indulge in all the spooky goodness the Witch City offers in October, like pumpkin-flavored cocktails, haunted attractions staffed by people in rubber monster masks, and shopping at the Wiccan shops.

We go up every October, but this year we took a somber detour before we went downtown to the Halloween festivities. We went to find Proctor's Ledge, the site where the city's famous nineteen accused witches were executed in 1692. 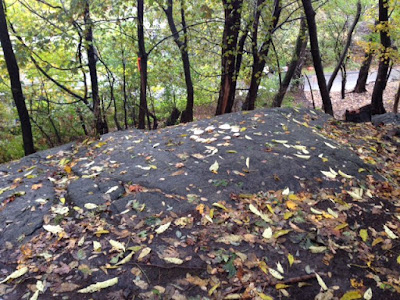 Historians were only recently able to accurately determine where the witch trial's gallows stood. It was known the executions happened on Gallows Hill, but not precisely where. In the 18th century two locust trees had been planted at the site as a memorial, but by the 19th century they were gone and there was no record of where they had been. Most historians in the 1800s simply assumed the executions had occurred at the top of Gallows Hill.

In the 1920s Salem historian Sidney Perley put forth an alternate theory. The doomed prisoners were brought to the gallows by ox cart, and Perley felt that the top of Gallows Hill was too steep for an ox cart to ascend. Based on eyewitness testimonials he instead argued that the gallows were built lower down the hill in an area known as Proctor's Ledge.

Perley's theory was verified just this year by seven scholars who worked together as the Gallows Hill Project. They combed through thousands of records trying to find references to the site. The final piece in the puzzle was found by historian Marilynne Roach in an account from the trial of Boxford's Rebecca Eames.

On August 19, 1692 Eames was being brought into Salem by Boxford constables when they encountered Salem constables bringing five accused witches to the gallows for execution. They were accompanied by a large crowd. Not wishing to miss the execution, the Boxford men left Eames at "a house below the hill" owned by John Macarter. During her examination later that day Eames testified that she had been able to see the hangings from Macarter's house. 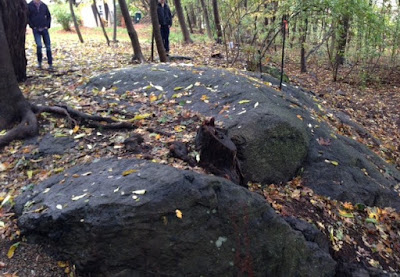 This was the key that historians were looking for. The location of Macarter's house was well-documented, and it would have had a view of Proctor's Ledge, confirming Perley's theory. Further, Eames would not have been able to see the top of Gallows Hill from the house, ruling out the other theory. (As an FYI, Rebecca Eames was convicted of witchcraft and sentenced to hang but happily was never executed.)

Proctor's Ledge today is an empty lot owned by the City of Salem. Located at 15 Proctor Street, it's nestled between some houses and hidden away behind a Walgreens. It's an incongruous location for someplace so infamous and darkly legendary. Happily it is located several miles from the busy downtown area, so I don't think anyone will be selling fried dough or souvenir t-shirts outside it any time soon. And I write that as someone who later that day ate fried Oreos on Salem Common and owns a Salem t-shirt. I have no problem with people making money off tourism or having fun. I love the carnival atmosphere of Salem in October, but Proctor's Ledge shouldn't be part of it.

The city is developing plans for a memorial of some kind, but until then I think it's best if the site is left untouched. This is a spot where nineteen people were executed for crimes they never committed. It's one of the most infamous places in American history. Visiting it was a somber and quite frankly unnerving experience.

*****
My sources for this week's post: Benjamin Ray's Satan and Salem, plus this article in The Salem News.

I first learned of this from Dan Boudillian's book "Weird MA" and elaborations on his web postings in 2006 and assumed it was common knowledge for scholars and only news for novices like me. Since then I have been amazed how many people knew nothing of this and were convinced that gallows hill was the actual site. ( or the town wouldn't call it that - they would argue) I think it's great people like you are spreading the word so the actual place is known to all and will hopefully be preserved and respected. Just one more reason New England Folklore is awesome! Keep up the great work Pete! ... and we'll keep reading! thank's ... Bill P.

Weren't you supposed to burn witches? I didn't realize they were hanged; were they all hanged?

Regarding burning versus hanging witches: in New England the Puritans hanged witches. This was the standard form of execution for all kinds of criminals (pirates, witches, murderers, etc.) They were following what had been done back in their home country of England. However, in some continental European countries (like Germany or France), the government would instead burn witches and heretics.

Loaded Gun, you are right about Giles Corey. He died as he was being tortured, so he isn't usually counted among the executed witches. He didn't confess so he was never convicted and technically therefore never executed. Technically. But at some point the sheriff must have realized all those rocks were going to be fatal... The field where Giles Corey died is now Salem's Howard Street Cemetery, and unsurprisingly it is said to be haunted.

Good post. I appreciate those who pinpoint the exact place of an historical event; there's something to be said for exactitude.

Right now I'm reading Stacy Schiff's The Witches: Salem, 1692. It's an extremely exact and erudite book that dispels a lot of inaccuracy. Sometimes it's hard to separate the truth from the Arthur Miller. John Proctor, for example, was a former tavern owner, and in his 60s.

Highly recommended for those who are really into Salem, or into how an entire society can go quite mad--in 1692, today, or anytime.

Hi Steven! Thanks for the comment. I just started Schiff's book. She writes very well and I like her attention to detail. So many legends and myths have accumulated about the Salem trials. It's nice to see a popular book try to tell the truth.

Have you read Marilynne Roach's book The Salem Witch Trials: A Day-by-day Chronicle of a Community Under Siege? It's so amazingly detailed and contains information about hundreds of individuals involved in the trials. It's great if you are interested in researching the Salem trials.