Harry Main and the Black Cats from Hell

Here's an old ghost story from Ipswich that is perfect as we gear up for Halloween.

Back in the 1600s, a man named Harry Main lived in Ipswich. Harry was not a good man. He was a pirate, a smuggler, and a blasphemer. But worst of all, late in his life he embarked on a career as a ship wrecker.

On dark stormy nights, Harry would light ship beacons on the Ipswich shore, falsely signalling to passing merchant vessels that safe passage lay straight ahead. After the ships wrecked themselves on the treacherous sand bars Harry would salvage any valuable cargo that washed to shore. He left the corpses of the drowned sailors to the gulls.

Harry thought he had a good thing going, but his neighbors eventually learned where he went on those dark nights. They hanged him for his crimes, but God exacted a different form of justice. Harry Main's soul was sentenced to haunt the shores of Ipswich and Plum Island, making chains out of sand for all eternity. It is said that his howls of frustration can still be heard on stormy nights when the wind blows away the chains he has made.

After Harry's death his neighbors wondered what happened to all his wealth. Everyone knew he had accumulated a lot of gold, but nothing had been found when they searched his house. Like all pirates, Harry had buried it somewhere and taken the secret to his grave.

Several years after Harry's death an Ispwich man dreamt he was digging for treasure on a certain hill outside of town. After having the same dream the following two nights the man realized he was having a prophetic dream. He had been shown where the treasure was buried!

The next night after sunset the man stealthily walked to the hill. In addition to his shovel he carried his Bible. He suspected that Harry had not only buried but also magically protected his treasure, as pirates liked to do. He hoped that his Bible would protect him. The man also had heard it said that it was of the utmost importance to remain silent when digging for buried treasure.

In fact, he had once hear an old man at the tavern tell his cronies, "No matter happens when digging for treasure, you have to remain silent - OR ELSE." The cronies had nodded in agreement.

With this warning in mind the man came at last to the hillside and began to dig. The digging was surprisingly easy, and guided by the light of a full moon the man made good progress. In less than two hours he was standing in a deep pit.

His soon excavated a large stone slab and an iron bar that had been buried next to it. Aha! He had found the treasure. He stuck the bar under the stone slab and started to pry it up when he felt something soft rubbing against his leg. 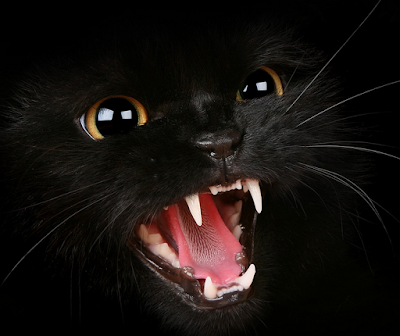 It was a black cat. The man tried to kick it away, but the cat was undeterred. Soon another black cat appeared in the pit, and then another. As he tried again to raise the slab the cats hissed and clawed at him. Up above, more black cats appeared around the rim of the pit, their eyes gleaming orange in the moonlight as they yowled in anger.

Finding himself surrounded by demonic felines the man panicked. He swung a them with his shovel, he pelted them with stones, but more and more cats kept appearing to claw and bite at him. Finally he shrieked, "Scat! Away with you!"

The cats vanished in an instant, but then the man realized what he had done. He covered his mouth to prevent any more sounds from coming out but it was too late. The earth began to tremble and the pit began to fill with icy water. He scrambled up to the surface and watched in horror as the pit collapsed. Within seconds it was gone. The treasure was once again hidden beneath the earth.

The man realized that the treasure was cursed, and vowing to never return to that spot he walked back into town still carrying the iron bar he had uncovered. Perhaps the treasure is still buried there today, waiting for the person brave enough to silently endure an attack by black cats from Hell.

Is there any truth to this story? Maybe. In his 1905 book Ipswich in the Massachusetts Bay Colony, Thomas Franklin Waters wrote that a fisherman named Harry Maine did live in Ipswich in the 1670s and was probably the origin of these legends. As further evidence, for many years an iron bar latching the door of a house was pointed out to visitors. It was the same iron bar the man had found at the bottom of the pit. 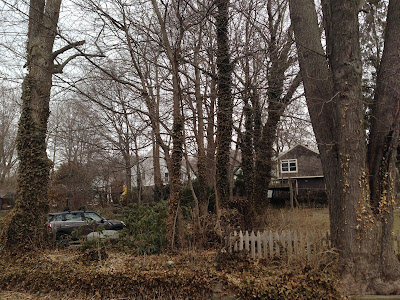 Tony and I visited Ipswich while I was researching my book Legends and Lore of the North Shore. We found the spot where Harry Main's house once stood (see above). It is just on a quiet residential street near the river. The lot is private property so please don't trespass! We didn't go looking for the buried treasure...

Thanks once again for a great tale.