Taking a Trip Down Witchtrot Road

I've written before about the abundance of places in New England named after the Devil. There are quite a few named after witches as well, like Witchtrot Road in South Berwick, Maine.

A commenter asked me if I knew anything about Witchtrot Road, and I'm happy to say I do. The story behind the street's odd name begins with Reverend George Burroughs, the one-time pastor of Salem Village, Massachusetts.

Burroughs was born in England, raised in Roxbury, Massachusetts, and educated as a minister at Harvard. In 1670 he served as a pastor in Falmouth, Maine until the town was destroyed in an Indian attack. Representatives from Salem Village recruited him to be their minister in 1680 while he was sheltering as a refugee in Salisbury, Massachusetts. He accepted their offer and moved with his wife and three children to Salem Village.

Unfortunately the situation was not ideal. Burroughs was supposed to be provided with a salary, an allotment of firewood (a very valuable commodity at that time), and a house. Although the house was built for him, payment of his salary was delayed and when his wife died he had to borrow money from neighbor John Putnam to bury her. Burroughs was also asked to resolve long-standing disputes among various village residents.

Either the disputes were irresolvable or Burroughs (a short, muscular man with a bad temper) was just not the right person for the job. Instead of making things better he made things worse. In 1683 Burroughs left Salem and returned to the wild frontiers of Maine, preferring to take his chances with marauding Indians than minister to the fractious Salemites.

Nine years passed, and in 1692 the witch craze erupted in Salem. In their visions the afflicted girls saw that the witches were led by a man dressed like a minister. They soon identified him as George Burroughs. The ghost of his wife also appeared to the girls and accused Burroughs of murdering her and other victims as well.

On May 2, 1692, Marshal Jonathan Partridge of New Hampshire was ordered to arrest Burroughs and transporting him to Salem for trial. At first Partridge and his men were hesitant. Burroughs was accused of being the most powerful witch in New England. No mere dabbler in the black arts, the afflicted girls had labeled him a "conjurer." Burroughs was also known to be unnaturally strong for someone his size. It was said he could lift a full barrel of cider with one hand and also fire a heavy musket singlehandedly. Could mere mortal constables arrest such a powerful minion of Satan?

Ultimately the constables conquered their fears and set off for Burroughs's  home in Wells. When they arrived the minister and his family were having dinner. Burroughs submitted to arrest without resisting, and the constables felt relieved as they manacled him. It was believed at the time that binding a witch prevented them from using their magical powers. 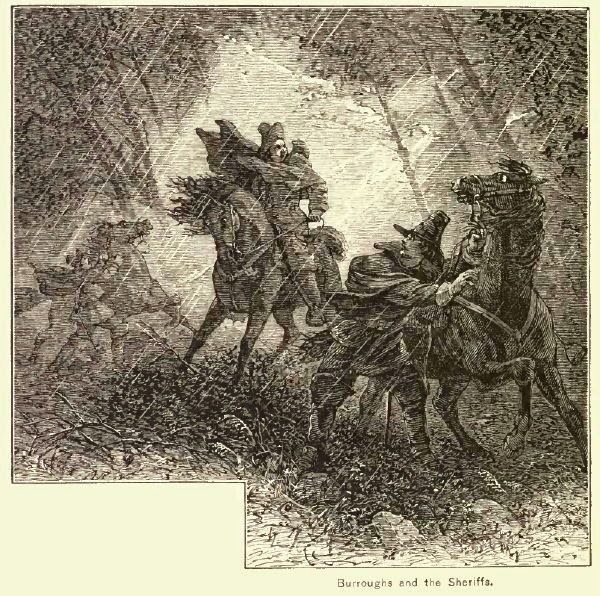 Burroughs suggested they take a shortcut he knew that would get them to Massachusetts more quickly. But as the group rode through the woods the constables began to feel concerned. Dark clouds were filling the sky and they could sense electricity in the air. A storm was coming - but who had sent it, God or his enemy? As the skies grew darker and the wind picked up the answer seemed obvious. It had been sent by Satan himself to prevent the constables from delivering Burroughs to the authorities. Rain poured from the sky, trees toppled onto the road, and lightning sizzled downwards. Filled with fear the constables rode onwards with their captive. The storm eventually passed and the constables sighed with relief. They had outlasted Satan's assault and could successfully bring Burroughs to Salem.

The road the constables traveled on is now called Witchtrot Road. Historian Marilynne K. Roach says there is no record of the constables' stormy journey in historic records, but the story does appear in Sarah Orne Jewett's The Old Town of Berwick (1894). Apparently the road's name and its story were an accepted part of local history well before Jewett was born in 1849. There's also a Witchtrot Road in Sanbornville, New Hampshire, which is right on the Maine border. Perhaps the two are connected?

As for George Burroughs, he was executed on August 19, 1692, another victim of the Salem witch hunts.

Thank you for providing me with a pretty cool history lesson! I am very happy to finally know the facts (and folklore) of Witchtrot Road. I've wondered for many years!

I'd love to hear the story of the Witches Gravy in the town of York (Maine.) I've been there many times but don't really know the full story behind it.
Thanks again!

Hi Anonymous! Glad you (and Bairduvessa) like the post. It's a good story, if a little depressing. I'll have to do the York witch story someday too, but this week's post is another Maine tale...

This is a great story, never heard it as I'm from Colorado but love story's like these.

Hi Anonymous! Thanks for reading from Colorado. I'm sure Colorado has some good weird stories. Strange things must happen in all those wide open spaces and big mountains...

Thanks. I grew up in Berwick, Maine and have bicycled past this road on numerous occasions. Not once did I dare venture down that road because I so often heard "Don't ever go down Witchtrot road." Back in my early high school days I heard stories about people who did venture down Witchtrot road; strange things supposedly happened, like, sudden dark storms with heavy wind, and even somewhat glowing apparitions which followed them a ways while they tried to speed away in their car. These people didn't sound like they were joking back then; of course, they could have been lying as a prank. Regardless, I have yet to go down Witchtrot road and I don't know if I ever will.

Witchtrot road can be seen in Berwick maps dating all the way back to the time of the supposed event, late 1600s. See Berwick Historical Society pages. The Witchtrot Road comes to a place called 'slut's Corner' which can also be seen on an old Berwick map, with names of many of my relatives, the Nathan Lord family, Chadbournes and others. A large rocky hill in the map is sometimes referred to as Mount Misery. So one might say... take Witchtrot Road to Slut's Corner, and just after Mount Misery, you'll see the Lords.

Grew up in SB, travelled Witchtrot almost daily for 10 years, slept over friends' houses that lived on Witchtrot. I get a kick outta hearing people claim it's haunted. It's a fun little folklore tale, though.

The "shortcut" Burroughs suggested, as I've read some years ago, was to ford the Salmon Falls at a point where the river was shallow, rather than to wait until the next day to ferry across the Piscataqua. If this is true, does anyone know where that river ford was? I suspect it was somewhere up-stream from the Hamilton House where the river bottom is mostly hard ledge, like at the Leigh's Mill - Salmon Falls confluence or at "The Landing" near the island. I'm just curious if there's any known history on the river fords that were used before bridge construction.

There use to be a hangman's rope and noose hanging from a giant elm tree about three quarter of the way across Witchtrot Rd if you travel across from the Emery's Bridge Rd.This was back in the mid sixty's. Wonder who put it there and might have been a victim. When they straighten out the curve the tree was cut down.

There is evidence of an ancient native american trail and three hundred year old trees throughout the area of Witchtrot Road. Mr. White settled here in the 1640’s. The rock walls should be protected and studied as original colonial history.