I'll be busy this weekend so I'm publishing my blog post a little early. Enjoy!

Here's a nice little ghost story from Horace Beck's 1957 book The Folklore of Maine. While researching the book Beck visited various locales around Maine, including the lighthouse on Matinicus Rock, which is located about five miles from Matinicus Island in Penobscot Bay.

Matinicus Rock isn't very big (only about 30 acres), but there has been a lighthouse on it since 1827. For many years there were two towers with lights, one each on the north and south ends of the building. When Beck visited only the south light was in use. The north tower had been decommissioned and the door was locked tight.

Beck asked the Coast Guard crew who manned the lighthouse why the north tower was locked. Their answer: to keep the ghost inside.

They told Beck that many years ago a lighthouse keeper had hanged himself in that tower, and since that time his spirit could be heard roaming through the tower on dark, windy nights. The ghost also broke dishes, slammed doors, and made equipment malfunction. The crew on the island learned the only way to control the ghost was to keep the north tower door locked. For some reason, the ghost wouldn't pass through the locked door.

A few years prior to Beck's visit a Coast Guard officer had come to Matinicus Rock for an inspection. When he heard the ghost story he demanded that the crew abandon their superstitious nonsense and unlock the door. They did as they were ordered, and that night all the lights on the island failed. The crew once again locked the door to the north tower and the lighthouse hadn't seen any trouble since. 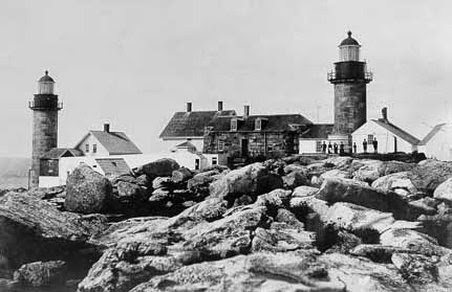 Beck couldn't find any record of a suicide at that lighthouse, but the Coast Guard crew was quite adamant about there being a ghost. The ghost story continued until at least the 1970s, when men stationed on the island claimed a strange light could be seen coming from the abandoned north tower on dark nights. They believed the light was the ghost of a lighthouse keeper who had killed himself. The crew nicknamed the ghost Moe.


Matinicus Rock light was automated in 1983 and has been unmanned since then, at least by the living. I suppose the ghost is still out there.

I like the idea that you can contain a ghost by locking the door. It seems appropriately symbolic, and reminds me of those Japanese horror films like The Grudge where ghosts were sealed behind doors with masking tape. But was (is?) Moe even really a ghost? There is no record of any suicides on the island so maybe the ghost is really some other spirit that likes lonely lighthouses. Skeptics might say the Coast Guard crew just made the story up, but personally I will withhold judgement until I spend a dark night alone out on Matinicus Rock.

Nice little ghost story Peter! One of the things I love about the supernatural is the 'rules' attached to them. That's why when new Vampire films come out and ignore or change the 'rules' usually ruins it for me. Call me old fashioned!

Thanks Rich! I like the weird rules as well. If you laid them all out together would you have a unified theory of the supernatural?