Sam Bellamy, Maria Hallett, and the Wreck of the Pirate Ship Whydah

Tony and I were down on the Cape recently and finally visited the Pirate Museum in Provincetown. I've wanted to go for quite a few years and was glad to finally find the time.

The museum's exhibits are focused on the pirate ship Whydah (pronounced "widdah"), which sank off the coast of Wellfleet in 1717. The wreck was located by divers in 1982, and the artifacts they found, including gold coins, a cannon, and the ship's bell, are featured in the museum.

Here are some interesting facts I learned:


The Whydah was originally commissioned as a slave ship, and is named after the African coastal city of Ouidah. It was captured by notorious pirate Black Sam Bellamy while it was sailing in the Caribbean. Bellamy took the ship as his own, loaded it with approximately four tons of stolen gold, and headed north to Cape Cod. He never reached the Cape, but died with almost all his crew less than a mile off Wellfleet's Atlantic coast in an April storm. He was 28 and is believed to have been the wealthiest pirate in history. 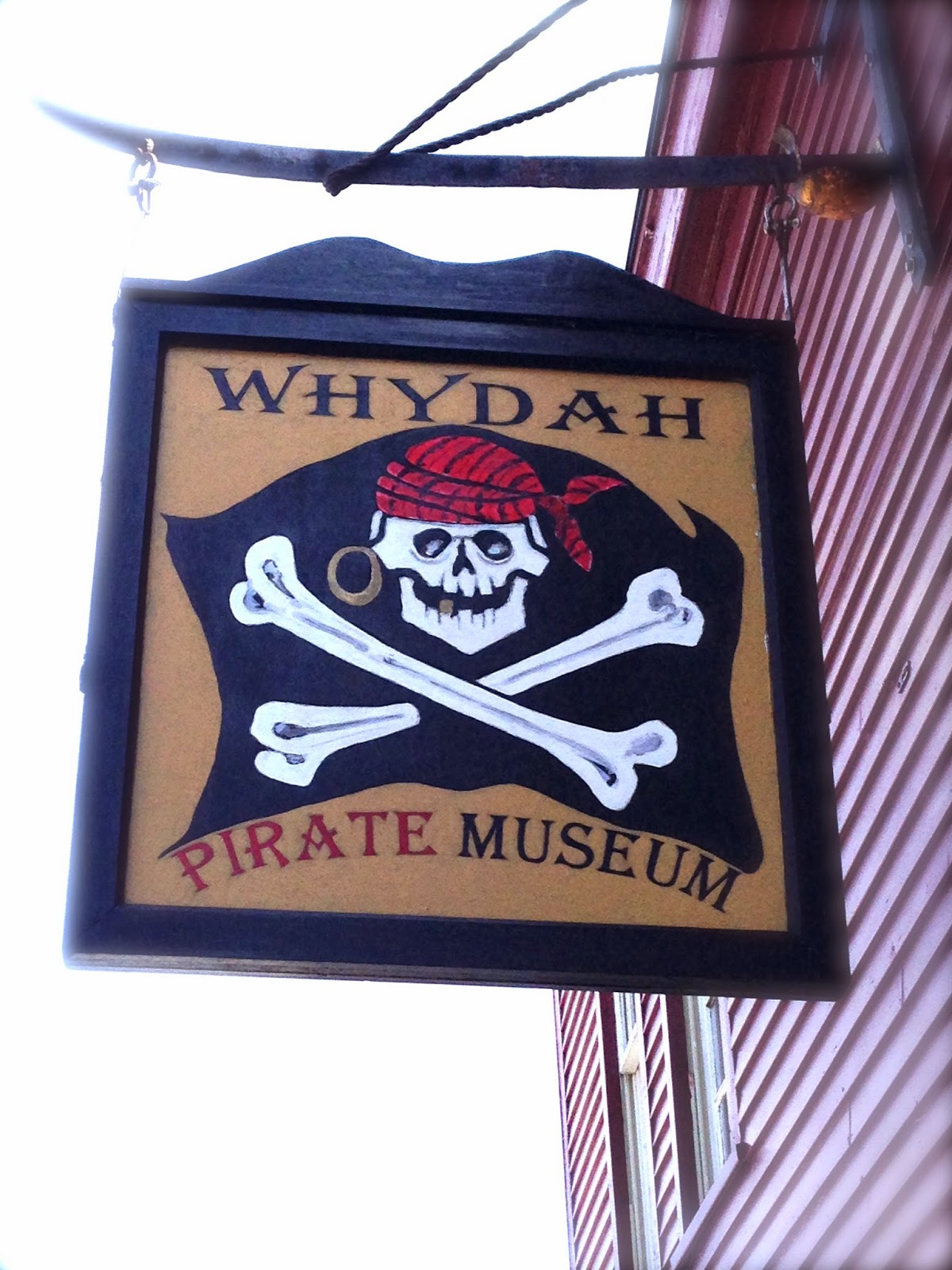 There are quite a few legends associated with Sam Bellamy and the Whydah. The most enduring is about his love for a local Cape Cod girl named Maria Hallett. On Cape Cod he met and fell in love with Maria Hallett, who was young (only 15!) and beautiful. Her parents didn't approve of Sam - he was just a poor sailor - but one thing led to another and Maria became pregnant with Sam's child. Declaring his undying love for Maria, Sam set off for the Caribbean to make his fortune. He vowed to return a rich man.

Some stories say Sam intended to find sunken treasure in the Caribbean, but found his way into piracy instead. Maria, who was left at home on the Cape, was shunned by her family and neighbors. Premarital pregnancy was not uncommon in colonial New England, but it usually led to a speedy marriage. Maria didn't have that option. She bore her child alone and unmarried in a isolated hut in the woods.

There are many variations of the legend, but they fall into two broad types. In the first, Maria grows bitter. Really, really bitter. She's been shunned by her community and abandoned by the man who said he loved her. Alone and angry, she turns to the one person who always was available to the New England outcast - the Devil. In return for her soul, and possibly the life of her child, the Dark Man makes her a witch. When Maria learns that the Whydah is approaching Wellfleet she climbs onto one of the high dunes and raises a storm. The man who ruined her life is drowned, the Whydah sinks, and Maria dances in the wild wind and rain. The area where she cast her spell is now called the Lucifer Land, Satan's Harvest, or the Devil's Pasture in local folklore.

That's the grim, gloomy version. The slightly less grim version claims that Maria remained faithful to Sam, watching and waiting patiently for his return. On the night of the storm she watched from the dunes, hoping the Whydah would make it safely to shore. When it didn't, she lost her mind from grief and ran down to the beach. The next day she was found on the shore, screaming and wailing as she wandered through the wreckage and drowned corpses. Her ghost is still said to walk near Marconi Beach in Wellfleet, and her cries can be heard on dark stormy nights.

There's a lot of historical documentation on Sam Bellamy's life, but there's no documentation about Maria Hallett. Did she even exist? It's impossible to know, but Hallett is an old Cape Cod name so it's entirely likely. Records from the early 1700s can be a little spotty.

Legends and strange phenomena surrounded the Whydah even into the modern age. Barry Clifford, the explorer who found the Whydah in 1982, claims that the expedition was plagued by bad luck and strange mechanical malfunctions while it was searching for the wreck. The divers and crew once even heard a voice over their radio repeat the following words: "We want your boat... We want your boat..." The weird shenanigans stopped only after Clifford and his crew poured rum into the ocean and toasted the dead pirate crew. Shortly after making this offering to the dead they discovered the sunken ship and its treasure.

In 1998, the staff at a Wellfleet restaurant also reproted a strange encounter. One of their customers emerged from the restroom in a panic. He said he had seen a young woman in an old-fashioned dress, but that she had disappeared. The staff checked the restroom and found it unoccupied. The customer hastily signed his name of the credit card slip and ran out of the restaurant. His last name was Bellamy.

The story of Sam Bellamy and Maria Hallett can be found in many places, including Elizabeth Reynard's The Narrow Land and Mark Jasper's Haunted Cape Cod and the Islands. The stories about the modern ghosts are from the Houston Museum's website.

it sucks that they tore down storyland off of main street hyannis. it was filled with cool trivia.

Thanks for the comment, and sorry for your late response. I never made it to Storyland. Did they have anything about pirates and witches?

a lot of stuff about pirates, some stuff about ww1 and 2; like how a beach i think in truro was used by german u boats as target practice

The book Weird Massachusetts calls her "goody" Hallett and tells a story about the Eastham jail in which she is freed by signing herself to an unknown stranger. It has also been implied that she had a child who she killed or who was stillborn from Bellamy's issue. There is to this day a goody hallet road in the area.

I have photos and video of hauntings at the pirate museum in Provincetown.

My childhood summers were spent at LeCounts Hollow, Pilgrim Road, we could hear what we thought was soldiers shootingat an aold shipout in the ocean, I never found anthing of Goody Hallet. We were true cape lovers, surfingsince age 16, regular cemetery historians. Fascninating story