It was late at night in 1980. (Or maybe it was 1981 - memory is a tricky thing!) Two people working the late shift at a small manufacturing firm on Route 151 in Mashpee, Massachusetts noticed something odd across the street at a garden center.

It was around 2:00 am, and the garden center was closed for the night, but the two workers saw someone lurking around the center's entrance. As they watched they realized the person was quite tall, and covered with long dark hair. The person wasn't just a person - it was Bigfoot.

As if Bigfoot wasn't strange enough, the two workers saw that the hairy humanoid also had a large, black dog with him. That's right - Bigfoot had a dog.

Most modern Bigfoot accounts state that dogs are scared of Bigfoot. Dogs bark whenever one of the creatures is nearby, and some people even claim Bigfoot kills dogs. That doesn't seem to be the case here in New England. This part of the country is more liberal, and even our mysterious monsters are kind to animals.

This doesn't mean that dogs necessarily like Bigfoot. In 1979, a man named Peter Samuelson and his girlfriend Holly were hiking on Bald Mountain in New Hampshire with their dog Kat. When they were near Connor Pond they came upon a stone hut whose roof was thatched with tree branches. Curious, they stuck their heads inside the doorway. It was dark inside, but as their eyes adjusted they realized they weren't alone. A large, hairy humanoid creature was also standing inside with its back to the door. 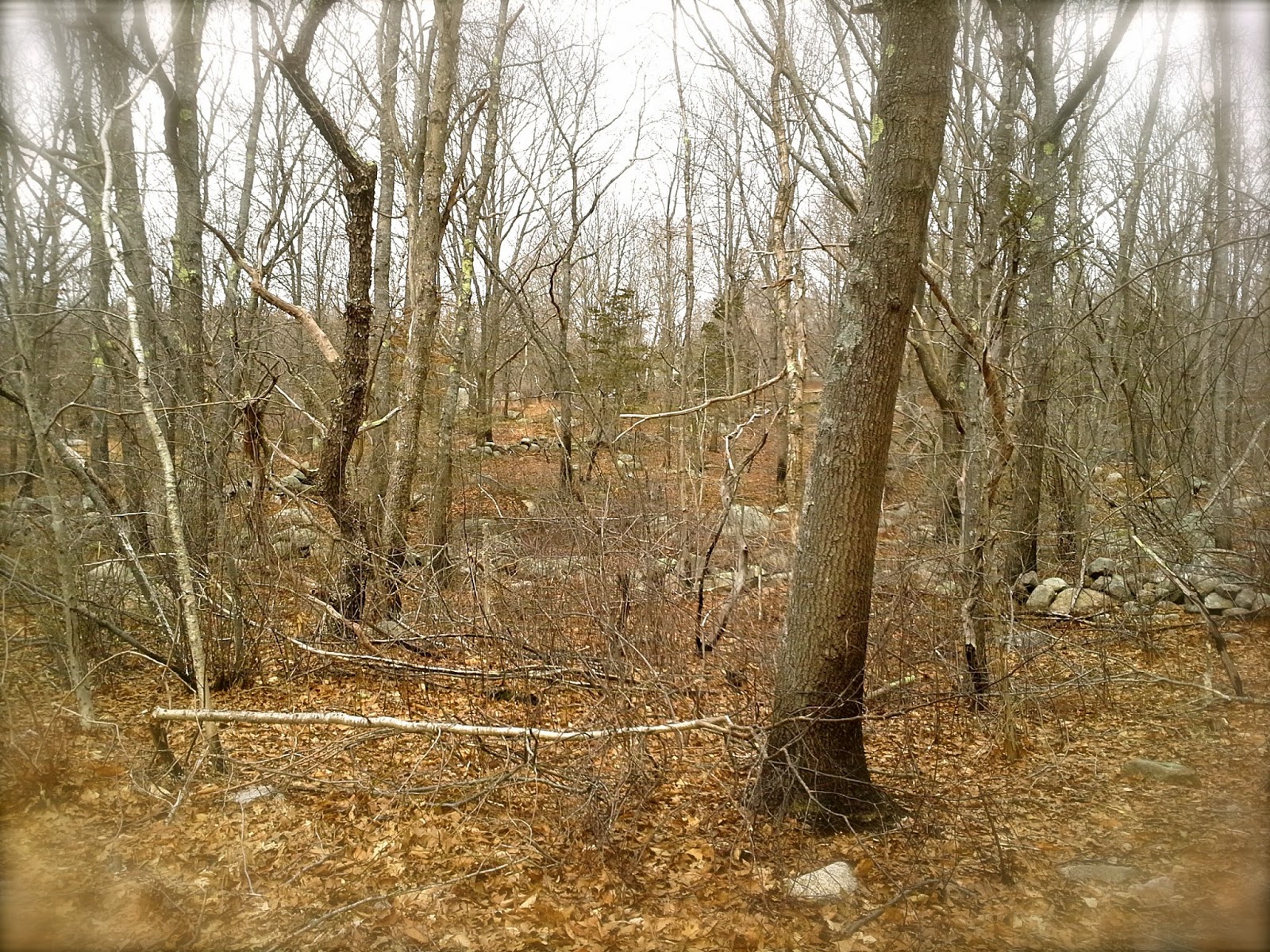 Kat growled at the creature. It turned around and growled back. Peter, Holly and Kat hightailed it away from the hut and out of the woods. Much later Holly was at the Wolfeboro Library and found an interesting story. One winter in the 1890s a man living on the shores of Connor Pond saw that a dog had fallen through the pond's ice. The dog was too far from shore for him to reach, and he watched helplessly as it struggled to escape. Suddenly, a huge, hairy manlike creature ran out from the woods. It grabbed the dog with its long apelike arms, pulled it to shore, and then disappeared back into the snowy trees.

Peter Samuelson eventually went back to Bald Mountain looking for the hut and its occupant, but when he reached the hut's location he was surprised to find it was no longer there. There were no traces of it at all. The hut had been made of many heavy boulders, and Peter was puzzled as to how it had vanished so completely.

These are puzzling stories overall, but really interesting. A lot of people think that Bigfoot is some type of apelike animal, but to me these two stories hint at something else.

Let's look at the story from Mashpee. Would an apelike animal really be walking down a highway with a dog? It seems doubtful to me. That the dog was black seems significant. Black dogs have long been associated with the paranormal and the supernatural, and I'd suggest that is the case here. It's probably also significant that the sighting happened near Edwards Air Force Base (now called Camp Edwards). Paranormal phenomena of all kinds are often reported near military installations in the US. Rather than an apelike animal, I'd say those two men saw something supernatural.

The creature seen on Bald Mountain also doesn't sound like an ape, or even a physical animal, to me. The vanishing hut seems more like something from a ghost story or fairy encounter than the behavior of an animal. An animal might abandon a lair, but would it carry off each stone until there was no trace it had even existed? This also sounds more like a supernatural encounter as well.

Of course, saying Bigfoot is supernatural or paranormal doesn't really answer any questions. Where does he come from? What does he want? Is he a ghost, an alien, a visitor from another dimension? Is he a visitor manifesting from the collective unconscious?

I don't know the answer, but it's good to know Bigfoot likes dogs.

Hmm...are the witnesses sure it wasn't a cat? I know of at least one bigfoot sighting in which the creature was seen alongside what can only be described as a black panther.

(I wish I could find my source, but whatever book I first read it in is at my brother's house. All I know is that it was either John Keel or the Bords.)

Any plans for upcoming book events in the Providence area?

Good blog post, Peter. Can't help but wander if maybe you should submit this to A&E's "Finding Bigfoot" show. They'd probably jump at the opportunity to not only investigate Bigfoot sightings in Mass & NH, but Bigfoot's four-legged companion! It's sure to spark their interest.

Anonymous, thanks for reading. The witnesses did say it was a black dog, but please tell me if you find the source for the Bigfoot/panther story. Have you ever read Daimonic Reality by Patrick Harpur? It has some similarities to John Keel's work, and he mentions how black dogs and black panthers merge and overlap in some of these stories. The color, size and mysterious nature of the animals are more important than the specific species, I guess.

No plans yet for a Providence reading, but I will announce if I do arrange one.

Hi Annie! Thanks for the comment. I don't know if the "Finding Bigfoot" people have ever gone to Cape Cod but it would be interesting if they did!

walking dog heard... dog stopped...something big snapped branches...heard repeated hissing....we walked by slowly ... bigfoot. dog scared. me too. nothing made me double look back like that...why was my large aggressive akita scared shitless ????

Thanks for the spooky comments! I believe Hollis NH had a famous Bigfoot sighting in the 1970s, when Bigfoot made an appearance at a fleamarket parking lot early in the morning. Maybe that would be a good future blog post!