Today I'm attending a birthday party for my friend Dave. I've known Dave for well over twenty years, and we both went to college in Maine. Dave also used to spend a lot of time in Maine when he was a kid and is a big fan of our northern neighbor.

To honor Dave, and the great state of Maine, I'm writing about Moxie this week. Moxie, to those of you who don't know, is a carbonated beverage (soda, tonic, cola, whatever!) that is associated with Maine and other parts of northern New England. When I was a kid you could really only find it up north, but now you can find it down here in southern New England as well.

Moxie is Maine's official state beverage, and was created in 1884 by Augustin Thompson, a Maine native who was a Civil War vet, a homeopath, and a surgeon. Although Moxie is now consumed as a soft drink, Thompson originally created it as a form of "nerve food" designed to strengthen the human nervous system. Thompson stated in his patent application that Moxie Nerve Food was "charged with soda for the cure of paralysis, softening of the brain, and mental imbecility." 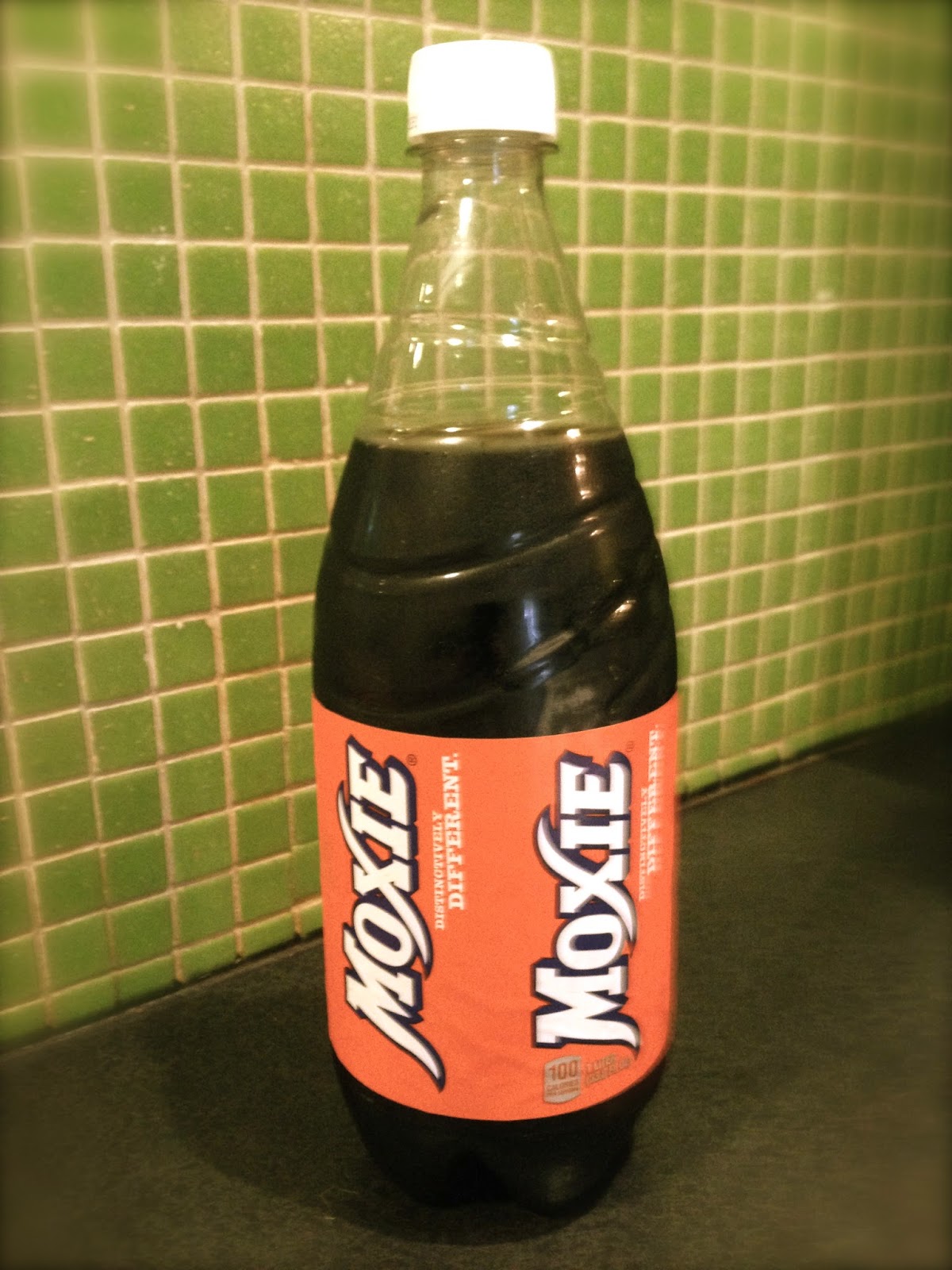 Thompson began bottling Moxie in Lowell, Massachusetts, and he promoted it with a variety of clever schemes. For instance, he claimed that gentian root, Moxie's special flavoring ingredient, had been discovered in South America by someone named Lieutenant Moxie. After receiving a sample of the root from Lieutenant Moxie, Thompson found out it could cure insanity, blindness, headaches, and "loss of manhood from excesses." Moxie Nerve Food became a huge hit and soon Thompson was bottling 27,000 bottles each week. It went on to become popular across the country.

The story about Lieutenant Moxie was just created for marketing purposed. There never was anyone named Lieutenant Moxie. Historians aren't sure where Thompson got the name for his product, but they suspect he was inspired by one of Maine's geographic features that are named Moxie, like Moxie Mountain.

Now, about that gentian root. It doesn't really cure anything. It also tastes a little bitter, so when people first drink Moxie they're often like "That's pretty good.. wait, what the hell is that aftertaste?!" When I was a kid I don't think I was ever able to drink a full can. However, now that my palate has matured I appreciate it much more. The distinctive taste is what makes Moxie special, and why the word "moxie" is now used to mean spunk or energy.

During the Depression sales of Moxie declined, and they fell even farther during World War II. At its peak popularity Moxie was sold across the entire country, but slowly it became just a regional beverage found in Pennsylvania and New England. (We New Englanders always appreciate the finer things, like Moxie, Indian pudding, and chow mein sandwiches.) For much of the 20th century ownership of the brand shuffled between huge beverage corporations, all but ignored in a sea of sugary mergers and acquisitions, until Moxie finally found a home back in New England in 2007 at Coca Cola of New England in Bedford, New Hampshire. Apparently this happened none too soon - someone in Maine was so desperate that he had been making and selling Moxie out of his garage using gentian syrup he purchased from a previous bottling company.

As you can see, people in Maine are very attached to Moxie. In fact, there is annual Moxie festival in Lisbon Maine. If you attend you'll see lots of people wearing orange and black!


You can just drink Moxie straight, or you can use it for mixed drinks. I was feeling adventurous and decided to bake with it. Here is my recipe for Moxie flavored cupcakes. I am not a cupcake expert, so I tweaked this root beer cupcake recipe from the Cupcake Project blog. (They are cupcake experts.) As a special bonus, these are vegan.

2. Add vinegar to Moxie and let it sit. Line cupcake tin with liners. Sift together the flour, baking soda, baking powder and salt in a small bowl.

3. Whisk the sugar, canola oil and vanilla into the Moxie/vinegar mixture until well combined.

4. Add the dry ingredients to the wet, and mix. Don't overmix, but you don't want any big lumps either.

5. Fill your cupcake liners about three quarters of the way full.

7. Take cupcakes out of the pan to cool, otherwise they'll get soggy. Once they are fully cooled frost.

I think these came out pretty good. They tasted a little bit like gingerbread and were very light and fluffy. I wish the Moxie flavor was stronger, but I didn't have any gentian root extract and used vanilla instead. Some health food stores do sell gentian root extract but I don't think it is intended for baking. It would probably taste pretty scary!

So, to sum up: even if you can't go to Maine this summer,  you can still drink some Moxie or make Moxie cupcakes and dream about visiting the sylvan wilds of Maine. And enjoy that aftertaste!

(I found the information about Moxie's history in Jim Baumer's 2011 book Moxie: Maine in a Bottle, which my colleague Heather loaned to me. Thanks Heather!)

I strongly suspect that Moxie is, and always has been nothing other than Angostura Bitters-flavored soda. Angostura Bitters contain gentian root and other flavoring ingredients, and were well-known as a flavor ingredient (mainly for cocktails) a long time before Thompson's creation went on the market. Put a few drops of Angostura into a glass of water & you'll see what I mean.

Hi Sean! You very well could be right. I just tried it and the taste was very similar to Moxie. Maybe Moxie is secretly Angostura bitters and sugar. I will use Moxie the next time I make a Manhattan and see how it works...

Add a few drops of Angostura Bitters to a glass of Root Beer and you pretty much have Moxie. If you look at all the root-extract beverages, they have lots of ingredients in common, especially wintergreen surprisingly. Moxie is basically a root beer with gentian extract. I've reviewed its original formula in ledgers of the company chemist. See more in our 2019 Arcadia Publishing book, Moxie. www.moxiesoda.com. Dennis Sasseville & Merrill Lewis.