A few years ago I purchased an iron horseshoe in a neighborhood botanica. There is a decent-sized Santeria community in Boston, and the horseshoe is an attribute of Ogun, the orisha (spirit or deity) who governs iron, the military, and physical strength. Don't mess with Ogun!

I don't practice Santeria, though; I just bought the horseshoe because I've always heard they're lucky. I'm not sure where this idea originated, but it's been found in New England for a long time. For example, in the late 19th century farmers in western Massachusetts told folklorist Clifton Johnson the following:

1. Nailing a horseshoe above the door of your house brings luck.

2. Nail it so the opening points upwards. Otherwise, all the luck will run out!

3. In the old days, horseshoes were used to repel witches from the house.

The first two are still commonly held beliefs, but I don't think many people in the 21st century use horseshoes to protect themselves from witches. If I am wrong please let me know. 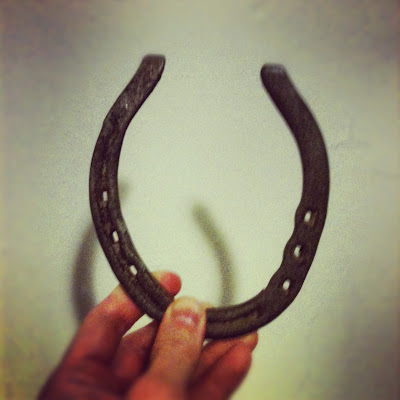 Those 19th century farmers were quite correct that their ancestors thought a horseshoe would keep witches out of the house. Richard Godbeer provides a great example in his book The Devil's Dominion, which examines witchcraft and magic in early New England.

The story goes something like this. Goody Chandler of Newbury Massachusetts became quite ill in 1666, and thought her sickness was caused by her neighbor Elizabeth Morse, who was unpopular and therefore considered a witch. Goody Chandler was determined to keep Morse out of her house, and nailed a horseshoe over the door. Apparently it worked because Elizabeth Morse refused to enter once the horseshoe was put up.

This probably would be the end of the story if an uptight neighbor named William Moody hadn't gotten involved. William Moody was opposed to any kind of magic, and he thought putting up a horseshoe was just as bad as witchcraft. He knocked down the horseshoe, and once again Elizabeth Morse began to come into Goody Chandler's house under the pretense of being neighborly. 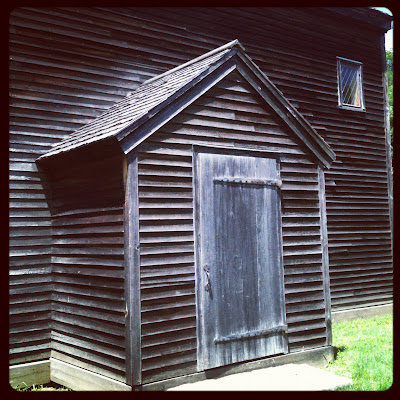 William Moody was not alone in condemning all forms of magic as witchery - it was the official platform of the Puritan church in New England. Cotton Mather himself, the leading minister in Massachusetts, wrote in Wonders of the Invisible World that,

"The Children of New-England have Secretly done many things that have been pleasing to the Devil. They say, That in some Towns, it ha's been an usual Thing for People to Cure Hurts with Spells, or to use Detestable Conjurations, with Sieves, & Keyes, and Pease, and Nails, and Horse-Shooes... 'Tis in the Devils Name that such Things are done."


I suppose William Moody thought he was being helpful, but he comes across as a pious busybody. And his actions certainly didn't help Goody Chandler, who just got sicker and weaker. She finally convinced another neighbor to nail up the horseshoe again (she was now too weak to do it herself) but William Moody took it down and this time carried it away. Elizabeth Morse was able to enter the house, and Goody Chandler died soon after.

It's an interesting story. Who was to blame for Goody Chandler's death? Elizabeth Morse, William Moody, or natural causes? I say natural causes (and I hope you do too), but her contemporaries had other ideas. Elizabeth Morse was brought to trial and eventually convicted of witchcraft, but even the judges must have had some doubts since she only served one year in jail.

A horseshoe could also be used to keep a dead witch in his or her grave. As I've noted in an earlier post, the people of Hampton, New Hampshire staked the heart of suspected witch Goody Cole after she died. To make double sure she stayed in her grave they tied a horseshoe to the stake.

Although the horseshoe is considered lucky and magical across Europe and North America, it's not quite clear why. The writer Robert Means Lawrence devoted an entire book to this topic (The Magic of the Horsehoe, published in 1898). Is it because its shape is reminiscent of the horns of a ferocious animal? Is it because it resembles a crescent moon? Or perhaps it's because it's made of iron, and supernatural creatures (such as fairies) fear iron.

I'm actually a fan of the iron theory, since other metals have the power to repel magical monsters (like silver against vampires and werewolves), and the defining lines between supernatural creatures are blurry. Witches can transform into animals, including wolves, and sometimes they return from the dead to cause trouble, like vampires. In the British Isles, witches often were accused of cavorting with fairies, and peasants nailed horseshoes over their doors to keep fairies out of the house. So I think it all boils down to this - if you have trouble with a supernatural creature, use some metal.

The next question is "Why does metal repel monsters at all?" but my blog is limited, and a question like that would probably lead me on an infinite regression into mankind's distant and murky past!

When I was a little kid in Brooklyn, NY horse drawn wagons such as those used by junk dealers were still seen on the streets. I was especially drawn to the sound made by the hooves when they hit the cobble stones that we had on Livonia Avenue in East New York. One day I picked up a horse shoe that had been dropped and left behind. It was a bit rusted so it must have been left there for quite a while. Thereafter, my dad nailed it on the top of my bedroom door. Can't say it brought me good luck but it was nice to have just the same.

Hi Trippler! Thanks for sharing your story. Who knows - maybe the horseshoe did bring you good luck but you were just unaware of it. I was up in Salem this weekend and at least one of the witch stores was selling some nice horseshoes.

I'm glad you liked the post! It's interesting that you have such an infamous relative.

I'm a firm believer in this. Not only is iron said to be protective against malign forces, the horseshoe itself is both shaped a bit like a crescent moon but also can be said to replicate the initial in the title "Christ." I have a knife forged from a discarded horseshoe as well as a nail made from a horseshoe nail and wouldn't part with either. Oh- btw - I'm a collateral descendant of John Alden, son of John and Priscilla, one of the accused at Salem in 1692... he escaped, hid out in Duxbury and returned, as he said, "after the publick had recovered the use of its reason."

Julian, thanks for the comment. Did you make the knife yourself? It sounds like a very interesting implement.

There's a show debuting this spring called SALEM, and the main character is John Alden. It's a highly fictionalized fantasy show based on the Salem witch trial. Not many people get a TV show starring their ancestor!

no, Peter, I bought it from a smith in Arkansas. It's really fascinating! I did find an error in my previous post where I said I had a "nail" made of a horseshoe nail; I meant to type "ring" LOL!

Horseshoes are considered protective and lucky because it's made of Iron. A sign of obeisance to the Living Life Force. Your Blood is also Iron and other precious Minerals, Gems. The kingdom, literally, actually, within. Your car de dios,cardio