Yesterday I went up to the North Shore to visit my friend Lori for the day. She said we could either go to the beach, or we could visit the cemetery of an abandoned insane asylum. We decided on the insane asylum.

If you grew up in northeastern Massachusetts you are probably familiar with Danvers State Hospital (which was located in Danvers, Mass.) When I was a kid it was synonymous with "insane asylum." For example my brother might say to me, "Stop acting like a weirdo or you'll get taken to Danvers!"

We used to pass by it on the highway sometimes driving into Boston or to my grandmother's house in Billerica. Danvers State was a big looming Gothic brick monstrosity that sat on top of a hill overlooking the surrounding area. It was really hard to miss.

Danvers was built in the mid-1800s and operated until 1992. From 1992 until 2007 it was abandoned, and served as a beacon to thrill-seekers and ghost hunters. If you wanted to find ghosts, this would be the place. With its peaked towers, labyrinthine corridors, and network of underground tunnels, the abandoned hospital was as creepy as a movie set.

The hospital's history also contributed to the legends about it being haunted. Built initially to house 600 people, at its peak Danvers had 2,300 inmates living in overcrowded conditions, and lobotomies and electro-shock therapy were common treatments. Danvers saw a lot of misery and unhappiness in its time. Where better to find restless souls? Staff who worked there claimed it was haunted even while it was open, and paranormal researchers photographed glowing orbs on the hospital's grounds after it was closed.

In 2001, the horror film Session 9 was filmed inside the abandoned hospital buildings. The movie tells the story of an asbestos remediation crew hired to start renovating (you guessed it) an abandoned insane asylum. Needless to say, many bad things happen. I've seen Session 9 and it's creepy, so don't watch it if you scare easily.

In 2005 the state sold the hospital to real estate developers who wanted to make an apartment complex. Despite protests from local historic preservationists they tore down most of the original buildings and built several new ones. In 2007, a fire of unknown origin destroyed most of the newly constructed buildings. All the video cameras that had been set up to monitor the site shut down before the fire began. Creepy.

Real estate developers are even more persistent than ghosts, so eventually the Danvers site was successfully converted into an apartment complex called Avalon Danvers. I'm not sure if many people want to rent in a haunted insane asylum, so the management company plays down Danvers' history.

They did not remove the asylum's cemetery, however, which is located down the hill from the apartment complex. Lori and I initially were a little nervous about visiting due to Danvers' spooky reputation, but it was actually a peaceful place.

But it was a little odd.

Inmates who died in the asylum and whose corpses were unclaimed are buried here. The hospital staff marked their graves with numbered stones, rather than headstones bearing their names, which was a very institutional (and disrespectful) way of dealing with the dead. The numbered stone markers still exist. Some are small squares imbedded in the ground, while others are stone posts. There were hundreds of markers. 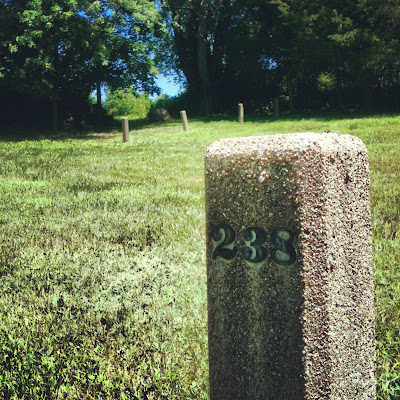 In recent years an advocacy group has tried to identify the deceased buried here, so some graves also have stones with names, and a large memorial lists the names of those who have been identified. 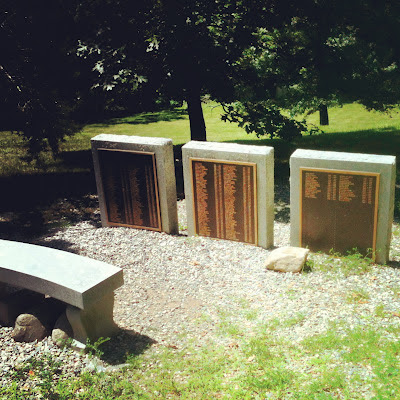 Overall the Danvers State Hospital cemetery felt sad rather than scary, and it's good to see that the site is not neglected. We did visit on a sunny summer day, though, so I'm sure if we had gone on gloomy day in November our experience would have been different.

Danvers was previously called Salem Village and was the site of the "Salem Witch Hysteria. Loony things going on there date from the 17th C. Two of my ancestors were accused, one was hung. Today people think it amusing. Hardly.

I had two family members die there of tuberculosis. Fortunately they are buried in Beverly, not on the grounds of the assylum. How sad that some people were just buried anonymously instead of proper burials by the rest of their families.

Thanks for your comments. It's fun to explore our region's history, but as you both note there is sadness and tragedy behind some of it. Boatskipper, I talk about the Danvers/Salem witchcraft connection in this week's post.

I grew up in Danvers not far from the hospital.I lived in town for thirty years.I returned back to Mass. to live and have surgery.I was at the cemetery in the 80s .The site wasnt visible unless you knew where to look. I am glad that the site is reclaimed and remembered. The hospital was a creepy place on a full moon in the fall.