Black Dogs, a Swamp, and some UFOs

I enjoy writing about old folklore, as a quick glance at my blog will show. But all the weird stuff in New England didn't suddenly stop in 1900. It's still going on. In fact, sometimes the same weird stuff has been happening for hundreds of years.

For example, a a few years ago I posted about the Black Dog of West Peak, a spectral dog who foretells doom on a Connecticut mountain. Stories about this sinister pooch were collected in the 1800s, but eerie black dogs are a staple of folklore in Europe and America. One of the most famous is the Black Shuck, a terrifying black hound who haunts East Anglia in England. (Many of the early Puritan settlers actually came from East Anglia, so maybe they brought their monsters with them.) In Irish folklore, a fairy called the Pooka sometimes also appears as a black dog - with a terrifying grin.

The Pooka and Black Shuck sound so quaint, like creatures from a fairy tale, that it's hard to believe people encounter phantom black dogs in modern New England. But they do.

In his book Mothman and Other Curious Encounters, Maine's own Loren Coleman relates two such encounters.

The first is from 1966. One spring night a group of people drove from Portsmouth, New Hampshire up to Eliot, Maine, where many UFOs had been recently seen. The Portsmouth folks parked their cars in a gravel pit where they had an unobstructed view of the starry sky. 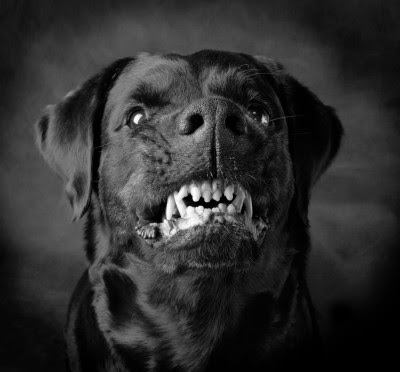 They didn't see a UFO, but instead saw something even stranger. As soon as they got out of their cars an enormous black dog bounded past them through the gravel pit and into the woods. It was the largest dog they had ever seen, and they decided to follow it into the dark trees. As they ran after the dog the person bringing up the rear noticed an odd smell.

He stopped, and saw a murky form gliding towards him. The weird odor was coming from the from. Even though it didn't speak, he knew the form wanted him to follow it.

Wisely, he didn't! Instead he ran back to the parked cars, and his friends followed after him. After hearing his story they decided to leave the gravel pit. As they prepared to leave the man who saw the form was filled with an uncontrollable urge to run off into the woods, and had to be restrained by his friends as they drove away.

It's an evocative if cryptic story, and Loren Coleman quotes it from a letter written by Betty Hill, one of the world's first alien abductees, which makes it even weirder.

This isn't the only story where a black dog is associated with UFOs. In his excellent book Daimonic Reality, English writer Patrick Harpur mentions a UFO abductee who saw a black dog inside a UFO, and Loren Coleman's second New England black dog story comes from southeastern Massachusetts' Hockomock Swamp. This area is called the Bridgewater Triangle by paranormal researchers, and is a hotbed for UFO sightings and other unusual activity.

In 1976 Coleman investigated reports of a large black dog that terrorized the town of Abington, which is inside the Triangle. A local fireman who owned two ponies had gone to check on his animals, and was horrified to see them lying dead on the ground with a huge black dog chewing on their necks. The dog disappeared into the woods.

The Abington police searched for the dog but were unable to find it. In the following days they received thousands of phone calls from concerned residents. Children were kept inside during recess, and local homeowners stocked up on ammunition in case the monstrous canine should attack.

Finally, after several days, police officer Frank Curran sighted the dog walking along some train tracks. Curran shot at the dog, but it ignored him and his bullets and walked off. The dog wasn't seen in Abington after that.

Once again, the story is spooky and inconclusive. Why do these dogs appear, and where do they come from? There's no way to know, but I bet people 100 years from now will be asking the same questions.

Yuor blog is very beautiful. I like it so much. I think it is useful for me. Besides, I also love dogs. Thanks for sharing. Hope you will share more