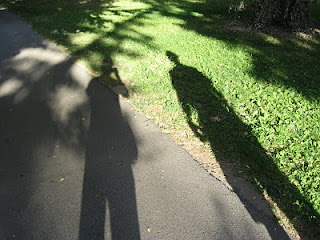 Tony and I went to a party in Somerville, MA last Friday. Why not stop by a haunted mill on the way?

The mill, which is better known as the powder house in Powder House Square near Tufts, was built in the early 1700's by one John Mallet. Mallet gave the mill to the Massachusetts Bay Colony in 1747, which used it to store gun powder. In 1774, British governor Thomas Gage confiscated the powder stored there so it wouldn't be used by the American rebels. Even later, the American army used the building to store their gun powder while they were laying siege to Boston.

It's a historic site, but where does the ghost fit in? 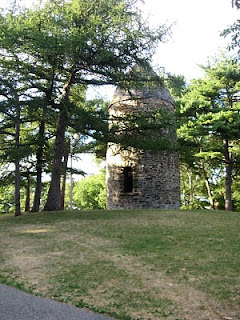 According to Charles Skinner in Myths and Legends of Our Own Land, before the Revolution the old mill was the spot where a poor young farmer used to secretly meet his beloved, who was the daughter of a wealthy man. He didn't want his daughter seeing a someone with no money, and became very suspicious of the amount of time she spent at the stone mill.

One moonless night, the wealthy man followed his daughter to the mill. Seeing that her secret was about to be discovered, the girl climbed the stairs up into the loft to hide until either her father left or her lover arrived. As she walked quietly through the pitch black room, she grabbed a rope to steady herself. 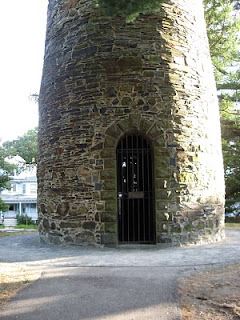 Big mistake! The rope set the mill's machinery in motion, and from the first floor she heard a grinding sound and a horrifying scream. Rushing down, she saw that her father's arm had been caught in a millstone and pulverized.

Her lover arrived, and they carried her father home where he received the best in 18th century medical care. Unfortunately his injuries were fatal, but before he died he gave his blessing to his daughter and the poor farmer. They got married several months later.

Even though he gave his blessing while alive, his spirit didn't rest peacefully after death. According to the locals, his spirit haunted the mill on windy nights, cursing and swearing, and appearing as a ball of blue sparks. His ghost was, quite literally, cussing up a blue streak. 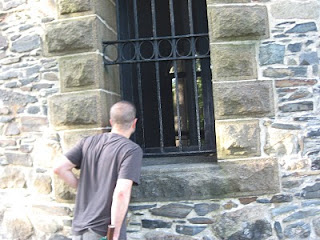 Tony and I didn't see any ghosts, but maybe we need to go back on a windy night.

Great pictures, it is a very interesting structure. Puzzling why there are 2 different accounts recorded so close together.

Thanks for the interesting story, Peter! Although I do wonder why he still haunts the mill, shame? Guilt?