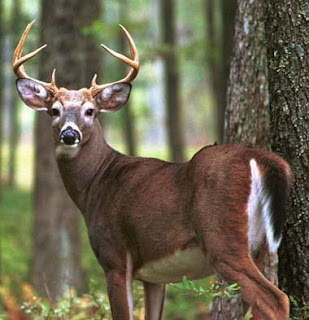 "It's my moon, so show me a little love!"
Well, according to the Old Farmer's Almanac tonight is the Full Buck Moon. Male deer's antlers start to emerge this time of summer, hence the name.

The last living deer I saw was July 2009, in the Arnold Arboretum in Jamaica Plain. It was just walking around and eating shrubbery, completely unconcerned with all the people nearby. Unfortunately, more recently I saw a dead one by the side of Route 93 in New Hampshire. I love seeing deer, but a lot people consider them pests because they eat bushes and gardens.

However, the original inhabitants of this area had a very different opinion about deer. They were very important to the Algonquians of New England, who gave us the name of this month's moon. Venison was one of their main sources of meat, and large numbers of deer were hunted and killed every year in the autumn. The Algonquians roasted venison, boiled it in a stew with dried corn kernels, and would even dry it to make jerky. Drying meat became much easier once the English settlers introduced salt, which became a valuable commodity among the local Indians.

The New England Indians viewed animals as equals deserving respect, and to needlessly kill an animal was considered a grave misdeed. When a hunter did kill an animal, the entire body had to be consumed to show respect. Otherwise, the spirit of an animal whose body was wasted might haunt the person who killed it.

So, in addition to eating a deer, the Algonquians used its body for other purposes. Coastal dwellers made harpoons from antlers, farmers used shoulder blades as hoes to break up hard soil, and archers made arrowheads out of sharp bone shards. The hides were used for clothing, moccasins, and even to make balls for a game similar to lacrosse. The unused bones of any animals were returned to the animal's home environment as a final display of respect.

I'm a vegetarian myself, but if you need to kill an animal the Algonquian way seems like the right way to go. If you see any deer this lunar cycle, try to treat them with respect.

PS - I got all this deer information from Howard Russell's Indian New England Before the Mayflower.

I see deer fairly regularly out here in the sticks and I'm always in awe of their grace and beauty.