Cannibals off the Coast of Maine 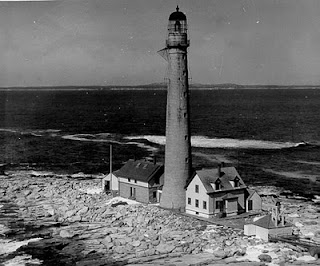 Boon Island Lighthouse
In December of 1710, the British merchant ship Nottingham Galley ran aground on Boon Island, a tiny pile of rocks off the coast from York, Maine. Although their ship was destroyed, all thirteen crew members and their captain, John Dean, made it safely onto the island.

Since the island is only 8 or 9 miles from the mainland, they initially thought someone would come and rescue them. They were mistaken. Whether because of bad weather or just bad luck, no ships came by for 21 days. Three weeks is a long time to spend on an island that's only 700 feet long, particularly when you don't have any food and it's the start of a Maine winter.

Weighing their odds, two crew members attempted to reach shore in a tiny raft they made, but died in the rough icy water. A third crew member, the ship's carpenter, died of starvation and cold.

Eyeing the dead carpenter, one desperately hungry sailor broached the unspeakable topic: should they eat him?

In the words of Captain Dean,

After abundance of mature thought and consultation about the lawfulness or sinfulness on the one hand, and the absolute necessity on the other, judgment, conscience, etc. were obliged to the more prevailing arguments of our craving appetites.

The crew couldn't bring themselves to butcher the carpenter, so Captain Dean did the hideous task for them once the sun had set.

They were rescued shortly afterward. Would they have survived long enough if they hadn't eaten their companion? There's no way to know. What decision would you make if you were in their situation?

I found this story in Nathaniel Philbrick's In the Heart of the Sea - The Tragedy of the Whaleship Essex. Philbrick's National Book Award winner is about a notorious case of nautical cannibalism involving a whaleship from Nantucket. It's worth reading if you're not too squeamish.

Boon Island now has a lighthouse on it, and like so many lighthouses it has an interesting history, including a possible ghost. That's not a surprise!

Email ThisBlogThis!Share to TwitterShare to FacebookShare to Pinterest
Labels: Boon Island, cannibalism, cannibals, Captain John Dean, In the Heart of the Sea - The Tragedy of the Whaleship Essex, Maine, Nathaniel Philbrick, Nottingham Galley

There is something particularly horrible about being marooned so close to civilization yet still being forced to cannibalism. Knowing those winters from experience, I'm surprised they survived that long.

* It has been said that some of the creature sightings in the North Woods could actually be a family of people who moved deep into the woods back in the late 1600's. The Rev. George Burroughs of Salem, moved his family to Maine just before the witch hunts started. Later he was named, arrested at his home in Maine, taken back to Ma., tried and hanged. The story that has been told is that his family, in fear of being persecuted as well, moved deep into the woods and were never heard from again. According to stories, they completely cut themselves off from the outside world and over the years since, due to inbreeding and living in the woods they have become creature like. It has also been said that they were possibly cursed by the Indians, who George had run ins with previously or they had resorted to cannibalism, consuming the body of another human in order to keep from starving to death during a long hard winter. This is said to be the most frequent cause of transformation into a Wendigo.
Any truth to this?

I did hear something about that story. My students are studying The Salem Witch trials and one of them stumbled onto a story about the Burroughs family. We are looking for more info right now. I have asked them to see what they can come up with.

I would be curious to hear what you and your students come up with, please post your findings
Thanks

It seems there is more info out there in regard to the Burroughs family I've asked a few of my students to do some research. I will get back to you with the findings

From what my students have discovered, it is very possible that descendants of George Burroughs are still surviving in the North Woods and that they have basically devolved. They are possibly cannibals
according to some stories they live amongst the wild and are at one with the animals. They do not speak they just use howling sounds to communicate. Sounds a little far fetched to me but makes for interesting reading!

sounds a little crazy, but with all of the sightings over the years it wouldn't surprise me if something was out there, and there is an enormous stretch of wilderness up in the North Woods of Maine

Thanks for the story, Peter! Whenever reading stories like this one wonders what they would have done if faced with the same choice?