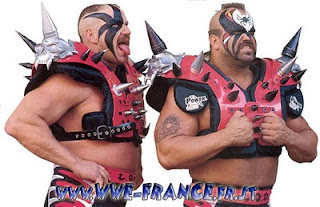 The Legion of Doom are ready to party, 19th century style!
We're coming up on July 4th, which has been celebrated as America's birthday for more than two hundred years. But like any party that goes on for a long time, sometimes things get a little out of hand.

We have a description from George Goodrich Cogswell (1881 - 1955) of just how out of control the holiday can get. Cogswell was a lawyer, businessman and arts patron who lived in Haverhill, Massachusetts. When he was a boy in the late 1890s, Haverhill celebrated Independence Day in a big way. A big crazy way.

The festivities began when a bunch of boys "contrived a dangerously huge bonfire in Currier Square", which is on a hill outside the center of town. As night fell in earnest, citizens would converge around the bonfire, blowing horns, dragging cowbells, and shooting off revolvers, "not all of which were loaded with blank cartridges." Even later, in true Olde Newe Englande fashion, the celebration would devolve into a drunken riot.

Finally, the police would arrive to disperse the revelers, but "the really bad boys wore straps with pointed nails over their shoulders to make any cop who tired to grab them really sorry."

If you asked me to describe a 19th century 4th of July celebration before reading William Goodrich Cogswell: A Selection of His Writings, I would have imagined lots of straw hats and apple pie. But now, I keep picturing scenes from Mad Max or The Road Warrior.

At least Cogswell's description makes me feel better about the drunk teens who shoot off fireworks in the park next to my house - they're not wearing spiked shoulder pads.

Thanks for the post, Peter! They took 'party hardy' to a new level!