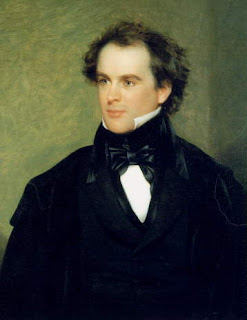 Nathaniel Hawthorne (b.1804, d.1864)
Most people are introduced to Nathaniel Hawthorne in high school, when they're forced to read The Scarlet Letter in English class. Students would probably like him a lot more if they knew he had actually seen a ghost. Like last week's post, this story is also focused on the Boston Athenaeum.

When Hawthorne was a bachelor (probably in the 1830s), he used to spend a significant amount of his free time reading at the Athenaeum. Among the many men he frequently saw there, he took particular note of one Reverend Doctor Harris, the Unitarian minister of Dorchester's First Parish Church. As Hawthorne describes him,

"He was a small, withered, infirm, but brisk old gentleman, with snow-white hair, a somewhat stooping figure, but yet a remarkable alacrity of movement."

Doctor Harris would spend his time in the Athenaeum's reading room with the Boston Post, the local Democrat newspaper. He and Hawthorne never spoke, and were never formally introduced.

One day, a friend of Hawthorne's remarked that Dr. Harris had passed away. But when Hawthorne went to the Athenaeum that day, he saw Dr. Harris still sitting in his customary seat, reading the newspaper (which probably contained his obituary notice)! He tried to ignore the ghost, but,

"Once or twice, no doubt, I may have lifted my eyes from the page to look again at the venerable Doctor, who ought then to have been lying in his coffin dressed out for the grave, but who felt such interest in the Boston Post as to come back from the other world to read it the morning after his death."

Hawthorne was the only person in the room who seemed to see Dr. Harris. And he continued to see him every day, reading the newspaper, for the space of several weeks. 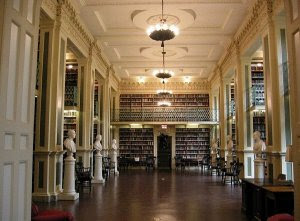 Are there any ghosts in the Boston Athenaeum today?
Towards the end of this period, he noticed the ghost began to watch him expectantly. Perhaps, he thought, the ghost had a message for him from beyond the grave, or would charge him with a task he would need to accomplish before it could rest.

Interestingly, Hawthorne didn't accept this implicit invitation to speak to the ghost. After all, he thought,

"I had never been introduced to Doctor Harris, dead or alive, and I am not aware that social regulations are to be abrogated by the accidental fact of one of the parties having crossed the imperceptible line which separates the other party from the spiritual world."

Finally, one day in the reading room, Dr. Harris's ghost looked at him with

"a sad, wistful, disappointed gaze, which the ghost fixed upon me from beneath his spectacles; a melancholy look of helplessness, which, if my heart had not been as hard as a paving-stone, I could hardly have withstood."

And that was the last time he ever saw Dr. Harris.

Mix one part Yankee reserve, one part fear of death, and voila! You get this story, which is very New England. After all, how many times do we pass by living people that we see every day without speaking to them? Would we treat a dead person any differently?

You can find Hawthorne's tale many places, but I found it on the Dorchester Athenaeum site.

This story leaves one to wonder if Hawthorne's life would have been different had he reacted differently...

Thanks for the comment! I also wonder if Hawthorne would have reacted differently if he were older and hopefully mellower.